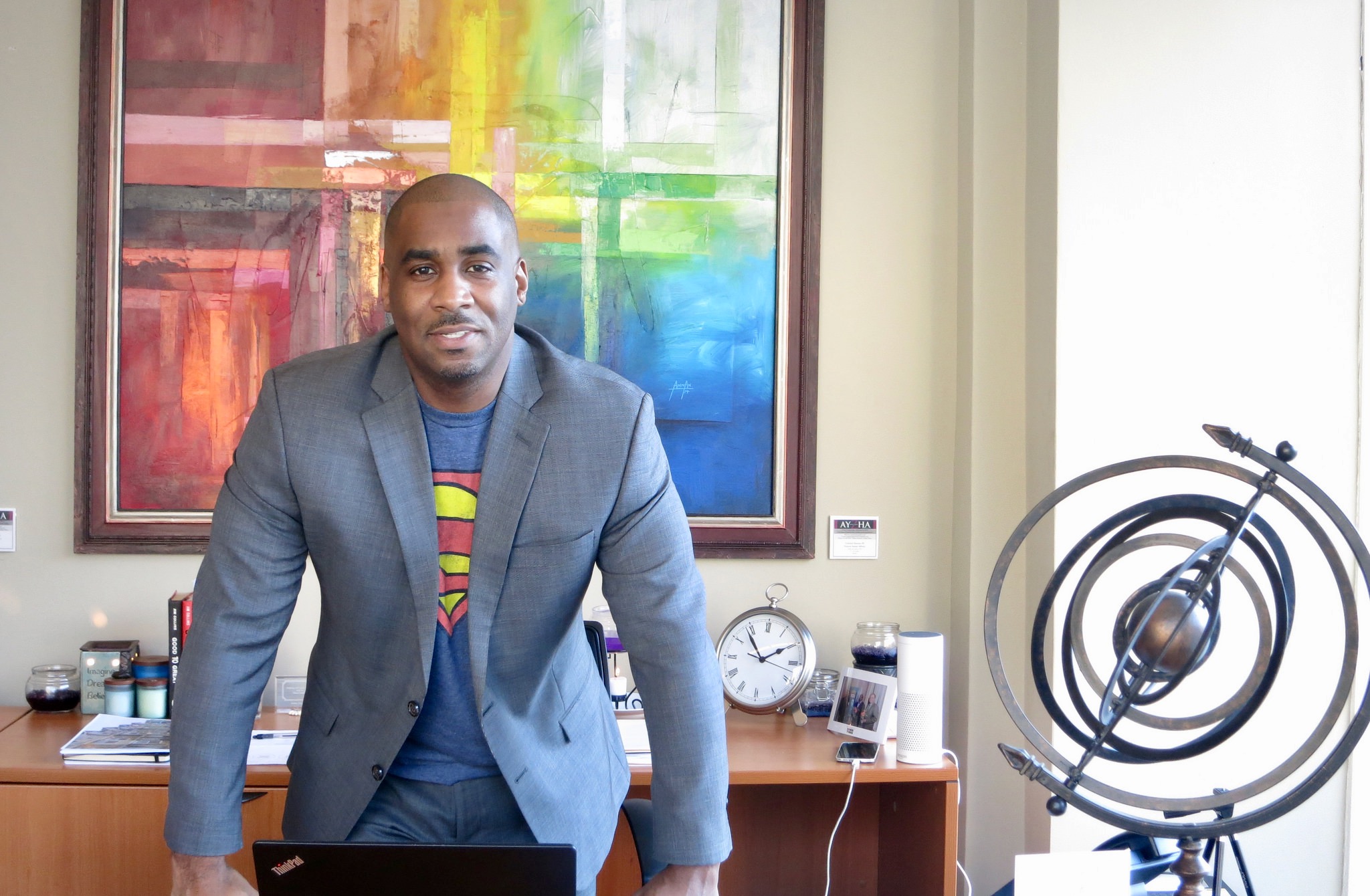 Kalan Haywood started honing his development skills on architectural drafting boards at the age of 16. (Photo by Talis Shelbourne)

Editor’s note: This article is one of an occasional series profiling the 12 finalists for the Milwaukee Awards for Neighborhood Development Innovation (MANDIs). Kalan Haywood is a finalist for the Northern Trust Navigator Award, which recognizes individual leadership.

“I met Tyrone at a seminar he provided to [Riverside University High School],” Haywood said. “His whole mission at the time was to make sure I didn’t do knucklehead teenage boy stuff.”

Haywood found himself interning with Dumas during his junior year in high school. Afterwards, he earned his first paycheck interning at EU Architects before studying architecture at the University of Wisconsin-Milwaukee. Now he is president of the Haywood Group, which he co-founded in 1999.

Haywood was born and raised in Brewers Hill, a predominantly African-American and Hispanic neighborhood during his youth that has since become majority white. As Haywood grew up, he saw the effects of gentrification firsthand.

“I heard my grandmother say how she felt left out of the process,” Haywood recalled. “They were pushed out, in essence, of a community that they were raised in, that they loved, and had spent so many years investing in.” 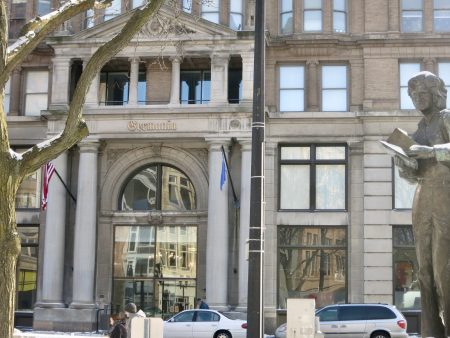 The young Haywood’s experience deeply affected his development style later on. “We don’t develop with budgets or calculations,” he said. “Our vision is set and founded in morals [and] the voice of our heart.”

During the past 18 years, Haywood has developed subdivisions, single-family homes, residential apartments, commercial spaces and retail stores in Milwaukee and other cities that he said “look and feel like Milwaukee,” such as St. Louis, Louisville and Indianapolis.

With his $25 million Germania building renovation in 2014, Haywood became the first African-American developer to build in downtown Milwaukee. However, the accomplishment left him with mixed feelings.

“For it to be ‘20-anything’ and we’re still saying, ‘first black anything,’ is ridiculous. So ok, it’s a good win but at the end of the day,” he said, “being the ‘first black’ says something about the rest of the city too.”

When he renovated the historic building, at 135 W. Wells St., he added residential housing and, in the summer of 2017, moved the Haywood Group’s offices there.

“He’s a strong businessman,” said Clifton Phelps, a JCP Construction partner who has worked on Haywood’s commercial projects. “You would think that he’s been doing this for 40 years.”

“He’s the kind of person who takes an eyesore and he breathes life into [it],” Phelps added. “Mainly, that downtown area was a ghost town for the last 15 to 20 years. And he had vision to put housing where there was a big housing lag.”

Haywood brought that same vision to his project with JCP Construction to move Walgreens from Martin Luther King Jr. Drive to North Avenue.

“He was building or trying to build a Walgreens in the old Jim Patterson tire lot,” on the 2700 block of North Avenue, Phelps said. “By the end of the conversation, he had us convinced.”

Later, Haywood approached Phelps about the possibility of constructing a healthy grocery store in Bronzeville.

“He literally came into our office, walked straight to look for me and my two brothers and said, ‘Look, we are going to solve this fresh food desert in our community and I want you guys to help,’” Phelps said.

Pete’s Fruit Market, which opened in September 2017, resulted from what Haywood described as a holistic development approach.

“It wasn’t us coming in and saying, ‘You guys need a grocery store,’” Haywood explained. “They said, ‘We won’t settle for anything less than a grocery store.’”

“He provided us with a much better understanding of the connections between the affordability of housing in Wisconsin and how that relates to better job opportunities for Wisconsin residents,” McKay explained.

“We just wanted to make sure that we did not have housing [in] a silo,” Haywood explained.

Haywood is vice chair of Milwaukee’s Housing Trust Fund Advisory Board, which examines proposals and assesses their financial viability and community impact. He also sits on the advisory board’s Technical Review Subcommittee.

According to Mario Higgins, associate director of the city’s Community Development Grants Administration, Haywood has always emphasized giving new and local developers opportunities to improve Milwaukee’s most dilapidated areas and his development expertise has made him an invaluable member of the advisory board.

“His background as a developer is extremely valuable for the committee in making those decisions on who to fund,” Higgins said.

For Haywood, infrastructure and community are indivisible. “Our part is not just to build bricks and mortar,” he said, “but to build people and build solutions.”

Haywood said he feels compelled to “build” the next generation. He visits classrooms to speak to students regularly. He said it is important for young people to have access to role models.

“Sometimes it is being present in the classroom. Sometimes it is when we sponsor basketball teams. … A lot of times, it’s saying ‘here is my story’ and young brother, young sister — whoever you may be — ‘here is my blueprint, you can use it.’”

Now a mentor and role model, Haywood said Dumas is never far from his mind.