You are here: Home / News / Arts and Recreation / Riverwest 24 bike ride strives to create ‘feeling of togetherness’
Share this... 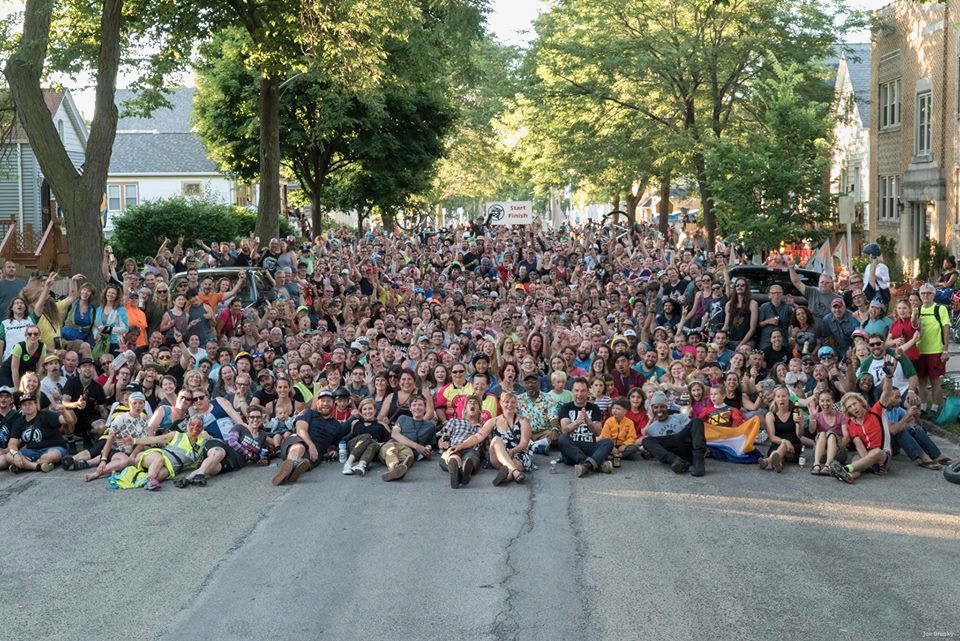 Editor’s note: This article is one of an occasional series profiling the 12 finalists for the Milwaukee Awards for Neighborhood Development Innovation (MANDIs). Riverwest 24 is a finalist for the Brewers Community Foundation Public Space Award, which recognizes public space that helps build community.

Nearly 11 years ago, Jeremy Prach and Paul Kjelland made their way out west on a trip to see the Baja 1000, an off-road race that takes place in Mexico’s Baja California Peninsula. That race inspired them and four other friends (Chris Fons, Mike McGarry, Steve Whitlow and Wendy Mesich) to create a tradition of their own in the Riverwest neighborhood.

“There was one thing that Paul and I realized when we were watching the Baja race,” Prach said. “No matter what town we watched in, everyone in the community would be cheering as the racers would make their way through and that was really awesome.” Prach and his friends were determined to bring that atmosphere home to Riverwest.

As soon as Prach told Whitlow about the idea, he was on board. “That feeling of togetherness and being neighborly is something that we’ve really strived for,” Whitlow said. Once the course map was devised, Whitlow and Prach agreed that riders should make stops to check in at different places.

“We needed multiple checkpoints where riders would stop and get their manifest punched and my house has been the first checkpoint for every year we’ve been doing this.”

More than 200 volunteers work to prepare for the event, which celebrated its 10th anniversary last summer. They arrange stops that require riders to get off their bikes and explore the neighborhoods’ public spaces. These checkpoints have included the COA Youth & Family Centers, where the riders participated with youth on group projects; Habitat for Humanity, where they helped prep construction materials; Reservoir Park, for a view of the sunrise; and Riverwest Food Pantry. 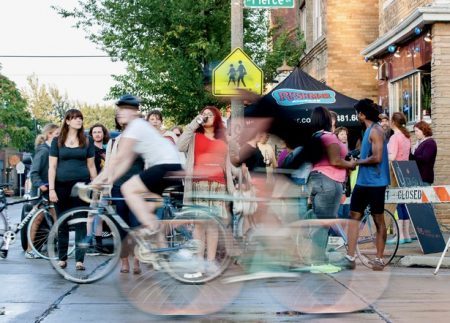 “The youth at COA have benefited a lot from this event and we are all grateful for what it has accomplished in its 10 years,” said Tom Schneider, executive director of COA Youth & Family Centers. “It’s just good for the city of Milwaukee as a whole,” he added.

For 24 hours, once a year, the Riverwest community celebrates the vibrancy of street life as families and friends ride, walk and watch the neighborhood in action, the organizers say. According to Whitlow, the event takes place in rain or shine and there is always a stellar turnout.

“The first year we started this event, there were about 188 participants, but we knew we could get more,” he said. “This past year, we had over 1,300 riders involved, our most ever, and it’s crazy to think how much this event has grown over the years.”

Jim Kogutkiewicz, 41, wanted to participate in Riverwest 24, but never made it because he missed the deadline for registration. “I’ve hung out in Riverwest during the race, but I really wanted to officially ride,” he said. “In 2017 I was able to join a team, and it exceeded every expectation. The neighborhood turns out for it and makes it such a huge party, but the organizers also go beyond to make sure your ride puts you in real, one-on-one contact with other people.”

Kogutkiewicz, a Shorewood resident, said that two “bonus checkpoints” were the best part of the race. “There was an activity where you are paired with another person, randomly, and you give your full life story in five minutes. I really valued hearing him sincerely explain his life, and talking to him.”

Riders are awarded nominal prizes for finishing the ride, according to Whitlow. “We had a complaint one year that there should be trophies for all participants, so we went ahead and got marbles and other things to let people build their own trophies after the conclusion of the race,” he said. “We also bought ice sculptures one year, which is ironic because the race is in the … summer and it all melts away,” he joked.

Whitlow said he does not expect the race to ever exceed 1,500 people because of the limited number of volunteers.

One Riverwest resident, Jennifer Quint, said she loves the race because of its ability to bring an entire community together. “This is one of my favorite days of the year because I can hang out with my friends until the sun rises and bike [until] I can’t feel my legs anymore.”