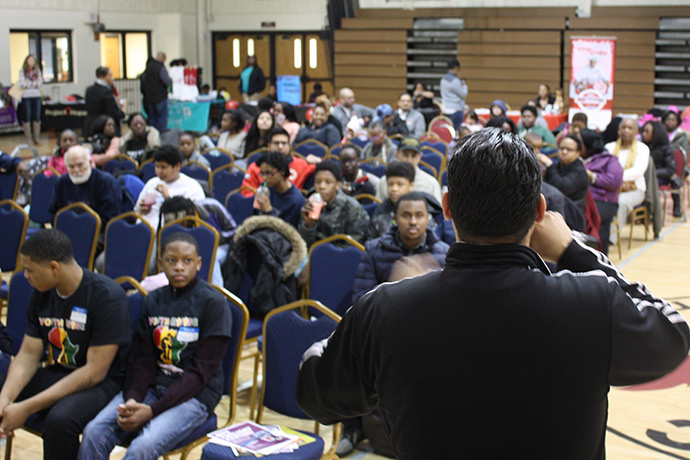 David Muhammad, of the Office of Violence Prevention, addresses a crowd of students at the youth summit. (Photo by Jabril Faraj)

After a recent incident at Franklin High School where signs were posted designating drinking fountains “white” and “colored,” Bria Smith, a Harambee resident and a student at the school, approached administrators about holding school-wide discussions about race. Smith, who is black, said communication is necessary to build relationships and bridge racial and generational gaps.

“We need to have big discussions about those things, because discussions turn to action, and action turns to solutions,” added Smith, a member of Leaders Igniting Transformation.

That’s exactly what happened at a recent youth-led summit held at Holy Redeemer School, 3500 W. Mother Daniels Way. About 100 young people of color gathered to discuss mental health, the causes of violence and what it is like to grow up in an environment that does not accept who they are. Smith and others said telling their stories and speaking up when necessary, even though it might be uncomfortable, are essential to create a more safe, fair and equitable society. 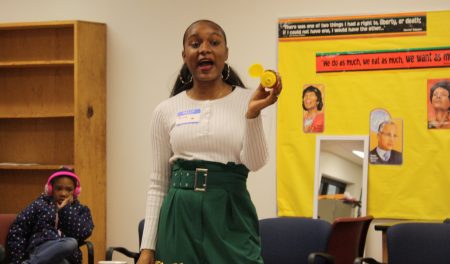 Bria Smith speaks during one of the break-out sessions. (Photo by Jabril Faraj)

In a small group discussion about mental health, one of four break-out sessions, many young black men talked about personal experiences living with depression. They noted that everyone experiences trauma, but it is greater among the black community, citing mass incarceration and how experiencing and witnessing violence affects individuals. Some said they did not feel they could be open about their emotions, or seek help.

Jaquill Wyatt, 24, who works with Westcare, spoke about being shot and witnessing the death of a friend who was sitting beside him in a car. “You never know what to do [or] how to feel,” he said.

During a presentation by David Muhammad from the city’s Office of Violence Prevention, a majority of the youth in attendance said they had not only witnessed violence, but intervened to prevent it. Many youth spoke about the importance of reaching out to help each other, and attempting to understand what motivates them.

Johnson, who attended a small discussion focused on bridging generational gaps, called many young people, including himself “hard-headed.” He said it is important for young people to listen. However, others pointed out that how people are approached matters.

“You have to have that trust with someone before you confront them,” said Arianna King, 16, who attends Urban Underground, an organization that trains youth in leadership and activism.

And, many pointed out that adults have a responsibility to listen, as well.

“If the older generation respects the younger generation, a lot can happen, and vice versa,” said Edward Carlson, 75, who was in the same room as King and Johnson.

MK Asante, a nationally renowned author who gave the keynote address, said adults not only have to listen, but follow, the lead of youth, noting, “They are the ones that are shaping our world.”

District 17 State Rep. David Crowley, who grew up in the 53206 ZIP code, agreed. He said policy-makers and others should be looking to young people for solutions.

“They are not our future — they are our ‘now,’” he said of the youth. “We are passing policies that directly affect them, so they should be at the table and not on the menu like they have been.”

Johnson said the event encouraged him to seek more opportunities to connect with people and to speak up when he feels he can make a difference in someone’s life.

“You won’t be able to change and save everybody, but you can find and see who you can change and save,” Johnson said. “The next time I’m faced, or presented, with that opportunity, I’ll jump at it.”