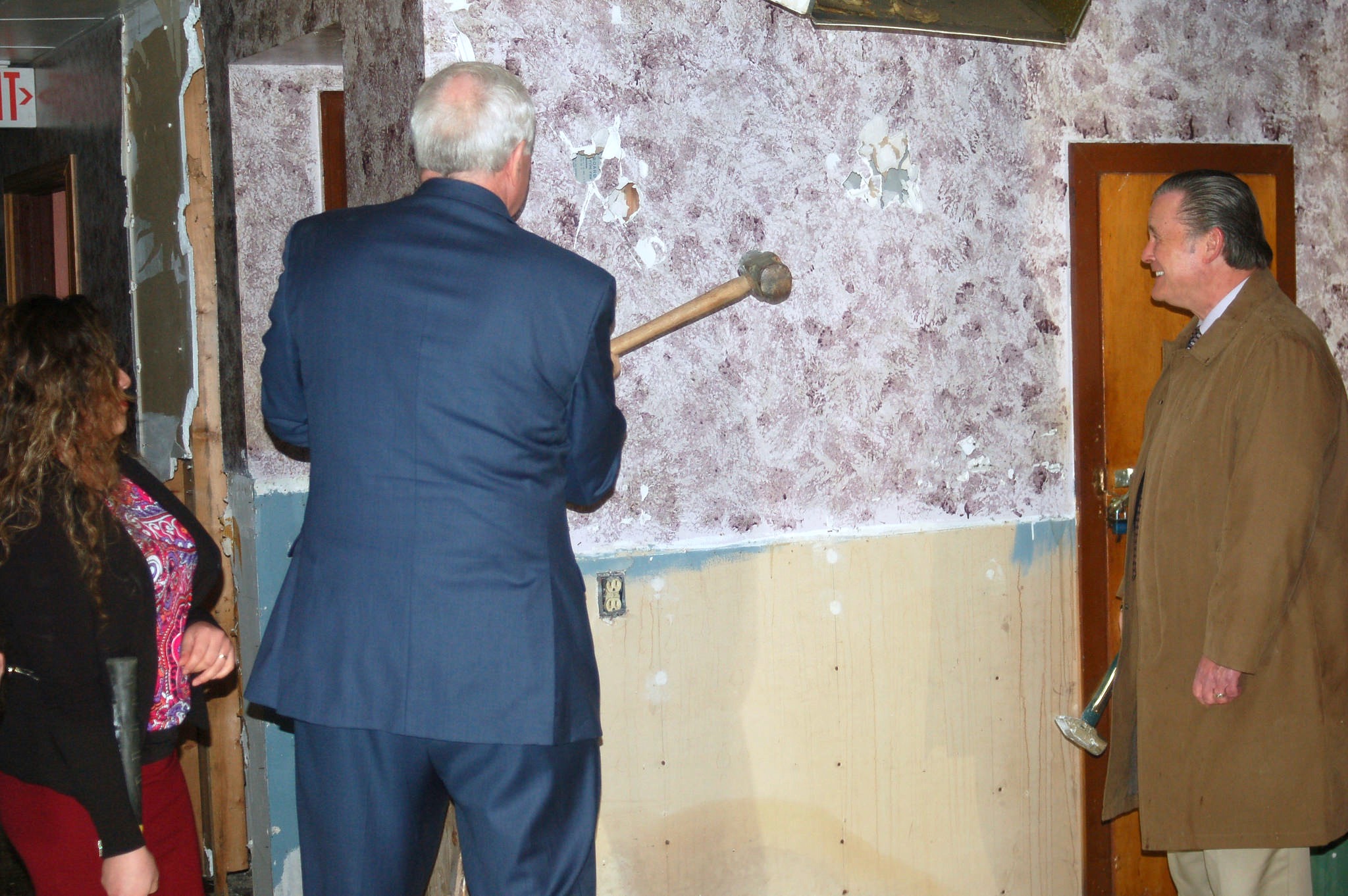 Mayor Tom Barrett (back to camera) takes a hammer to a wall in the planned restaurant at 3514 W. National Ave., as Ald. Bob Donovan looks on. (Photo by Edgar Mendez)

“The building was in poor condition and qualified for demolition,” said Mayor Tom Barrett, speaking to a crowd gathered a few doors down from the structure last week.

Instead, he said, the city sold it for $1,000 to the nonprofit Layton Boulevard West Neighbors, which crafted a plan to turn the building into a restaurant with apartments upstairs. LBWN expects it to be a catalyst for a larger development project along the 3500 block of West National Avenue.

Leticia Muñoz, who owns Michael’s Family Restaurant, 2220 W. Wisconsin Ave., will open Orenda’s, an American-style diner that will also serve Latin and healthy cuisine, at the Silver City location. The restaurant will create six new jobs and should be open this summer, she said.

Half of the nearly $500,000 renovation cost of the building that will house Orenda’s is being provided by the Zilber Family Foundation. Other funding includes a $75,000 forgivable loan from the city, a $25,000 grant from Greater Milwaukee Foundation and a low-interest construction loan from Tri-City Bank, according to Celia Benton, economic development manager at LBWN.

“City leaders and other stakeholders knew the 3500 of West National was ripe for catalytic growth, which often begins with the rejuvenation of one block,” Benton said.

According to Shannon Boone, director of real estate at LBWN, board members pushed the organization to secure 70 percent of the renovation costs before LBWN even purchased the discounted building, which before becoming vacant, had been a popular neighborhood diner for decades.

Once most of the funding was secured, said Boone, “It was important to take over the building even though we knew it would probably still only be worth half of the construction costs once renovated.

“The residents wanted something to be done with the building that would create amenities they needed,” she added.

Joseph Ruiz, a longtime Silver City resident, said he remembers the old diner as a popular place, and that it left a void when it closed. “I used to go there for pancakes. It will be real nice to have a place to walk for breakfast again,” Ruiz said.

With the idea of opening a diner in mind, LBWN approached Muñoz, who agreed to lease the building, which will also feature two market-rate apartments upstairs. The opportunity came about after she completed the Bilingual Entrepreneurial Certificate program at the Multicultural Entrepreneurial Institute.

“I was asked if I would be interested in opening a restaurant in this community, which I was very familiar with, and I couldn’t turn the opportunity down,” Muñoz said in Spanish.

The project was part of a vision to repurpose historic buildings on West National Avenue hatched during a December 2014 charette in Silver City hosted by the University of Wisconsin-Milwaukee School of Architecture and Urban Planning, Community Design Solutions Center. Aside from adding more dining options, suggestions that originated from the charette included adding more work and meeting spaces, parking options and a public plaza. The 5Wise workspace, 3524 W. National Ave., opened on the block last year and LBWN is developing plans to create new parking spaces and build a parklet featuring outdoor seating two lots west of Orenda’s, Benton said.

The restaurant project is in line with criteria identified in the resident-driven Quality of Life Plan for LBWN, developed by Zilber in 2011, according to Boone.

“It beautifies the neighborhood and makes it more safe by eliminating a vacant and blighted property,” Boone said.

Creating a catalytic project and strong commercial corridor along West National Avenue was a major priority of the Quality of Life plan, according to Erin Frederick, senior program officer at Zilber.

“This development project has a strong opportunity to increase economic vitality in the area and create neighborhood jobs,” Frederick said.

Commercial strips are the backbone of any thriving neighborhood, said Ald. Bob Donovan, who represents the area and supported the charette and other development efforts in Layton Boulevard West neighborhoods.

“Now we just need more people to take advantage of the opportunities to develop in this neighborhood,” Donovan said.

Editor’s note: This article has been updated to correct the amount of the grant from the Greater Milwaukee Foundation.