You are here: Home / Home / Carousel / South Side residents voice concerns about law enforcement at summit
Share this... 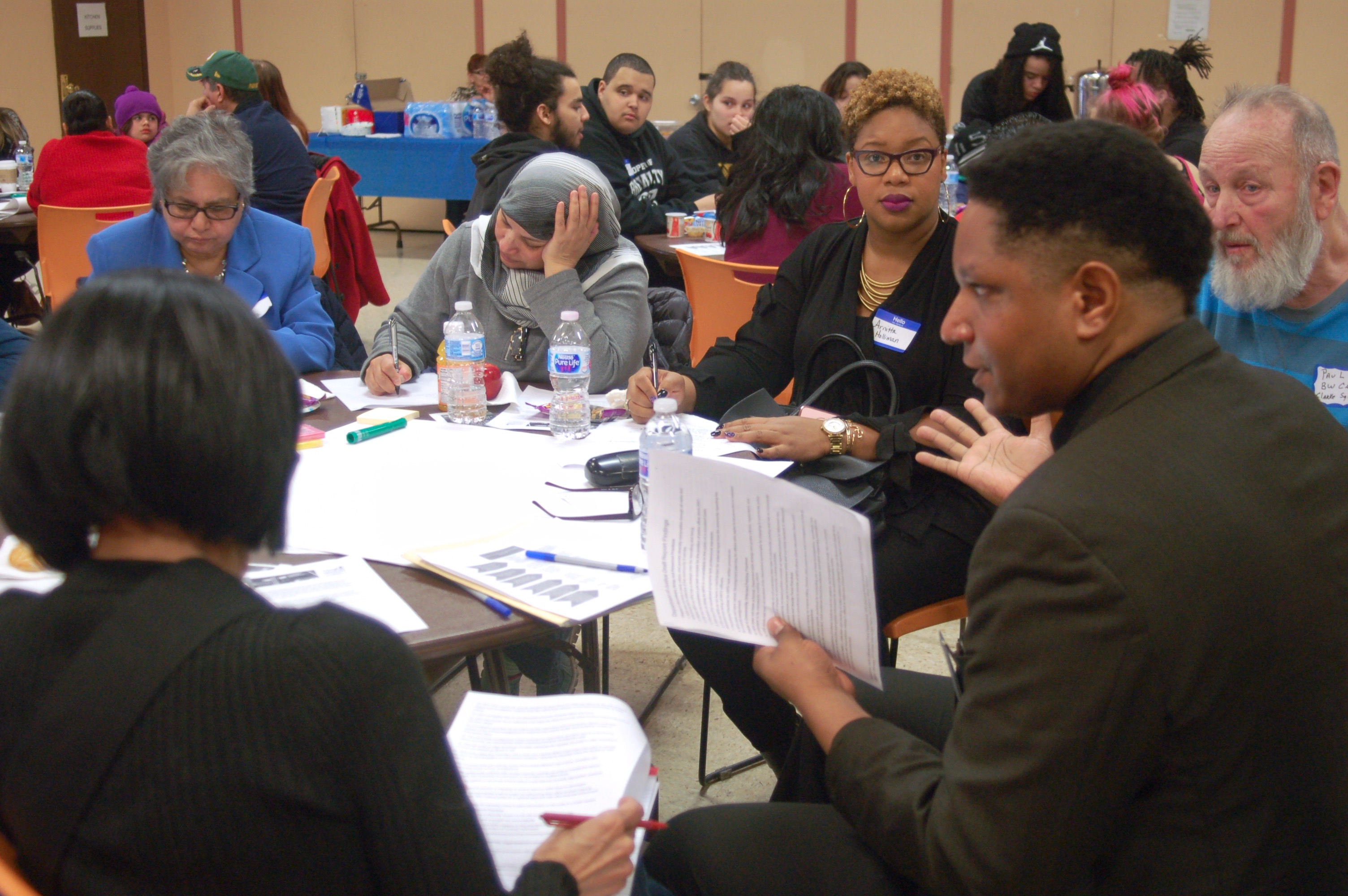 Jarrett English of the ACLU facilitates a discussion with residents. (Photo by Edgar Mendez)

The relationship between law enforcement and residents of Milwaukee’s South Side is broken — but not irreparably. That was the consensus among the 100- plus residents gathered at Ascension Lutheran Church, 1236 S. Layton Blvd., for a South Side Safety Summit.

Residents discussed recommendations made in a U.S. Department of Justice report that was developed from a collaborative reform initiative of the Milwaukee Police Department and the Blueprint for Peace, created by the City of Milwaukee Office of Violence Prevention.

According to Jarrett English, youth organizer and police accountability associate at ACLU of Wisconsin, since 2008 the city has paid out $30 million in settlements related to MPD misconduct, with half of that paid out since 2015.

English said the DOJ report backed up what residents of Milwaukee have known for decades. “There’s not enough oversight of the police,” he explained.

One of the DOJ recommendations was that MPD hire a third party to investigate complaints and create a more transparent complaint process.

Attendees said that more training could keep police officers from making mistakes that result in lawsuits. Roberto Reyna, who lives on 15th and Oklahoma in the Polonia neighborhood, said sometimes officers react out of fear, which results in excessive use of force. With proper training, he believes, those officers would be better at de-escalating situations and avoiding racial profiling.

“You can’t be scared to deal with people you come across on the streets because they’re black or brown. With better training, police can avoid having to use their guns. Maybe they’ll use their taser or talk a person down next time,” Reyna said. 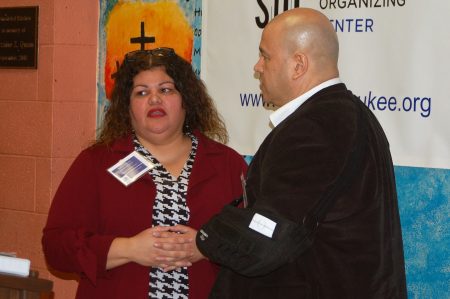 Another major issue among residents is police response times.

Carrie Meyer, who lives down the block from Ascension, said she’s heard many stories from people who called the police and either they never came, or took hours to arrive.

“Nobody on the South Side believes that when they call police that they will show up,” Meyer said, as the group she sat with nodded in agreement.

People stop calling the police when they know they will have to wait hours for a response, she explained. Meyer and others in her group recommended that MPD adopt a uniform policy to address calls for service.

Other problems identified in the DOJ report were lack of gender and racial diversity, inconsistent body camera policies and lack of understanding of community policing.

Not all the news was bad during the summit. Residents seemed pleased with the direction of the Blueprint for Peace. Goals of the blueprint, according to Reggie Moore, director of the Office of Violence Prevention, include stopping shootings, promoting restorative justice and advancing economic opportunities. The ultimate goal, according to Moore, is to create a city that people want to work, live and stay in.

“It has to be safe for those things to happen,” Moore said.

The blueprint focuses on 10 priority neighborhoods, including Historic Mitchell and Lincoln Village on the South Side, which were identified because of high levels of homicides, shootings, assaults and poverty.

The summit at Ascension is one of numerous such events that will be held across the city, according to Tammy Rivera, executive director of Southside Organizing Committee. Rivera is a member of the Collaborative Community Committee that was created to organize the summits. The committee eventually will collate the input and share it with city officials, MPD, Fire and Police Commission, the Common Council and others. MPD has also submitted input, according to Rivera. The result will be a collaborative plan to improve MPD and also the relationship between the community and law enforcement.

“The community thinks it’s critical to form an authentic collaborative effort to strengthen internal and external affairs with the police. The time is past due and now it’s demanded that we work together to form a collaborative process and we have a new chief that wants to do that,” Rivera said.

The new interim chief, Alfonso Morales, appointed to lead the department in mid-February, was on hand to speak to residents before the summit began. Law enforcement representatives were not invited to the summit itself, so that residents would be able to speak more openly, Rivera said.

Morales, who previously served as commander of Police District 2 on the South Side, was well received by the crowd. Morales impored the community to provide feedback on how to mend the relationship between police and the community.

“We love to talk sometimes but it’s important for us as police to listen to you, the residents. It might be negative things that we hear from you, but we need to hear it,” Morales said.

Ald. Jose Perez, who was also on hand, said he expects that once specific priorities are identified, some of which are in the DOJ report, they will be pushed forward.

“We have to move in the right direction. We need to be talking to one another and making sure that our communities are the safest places possible,” Perez said.