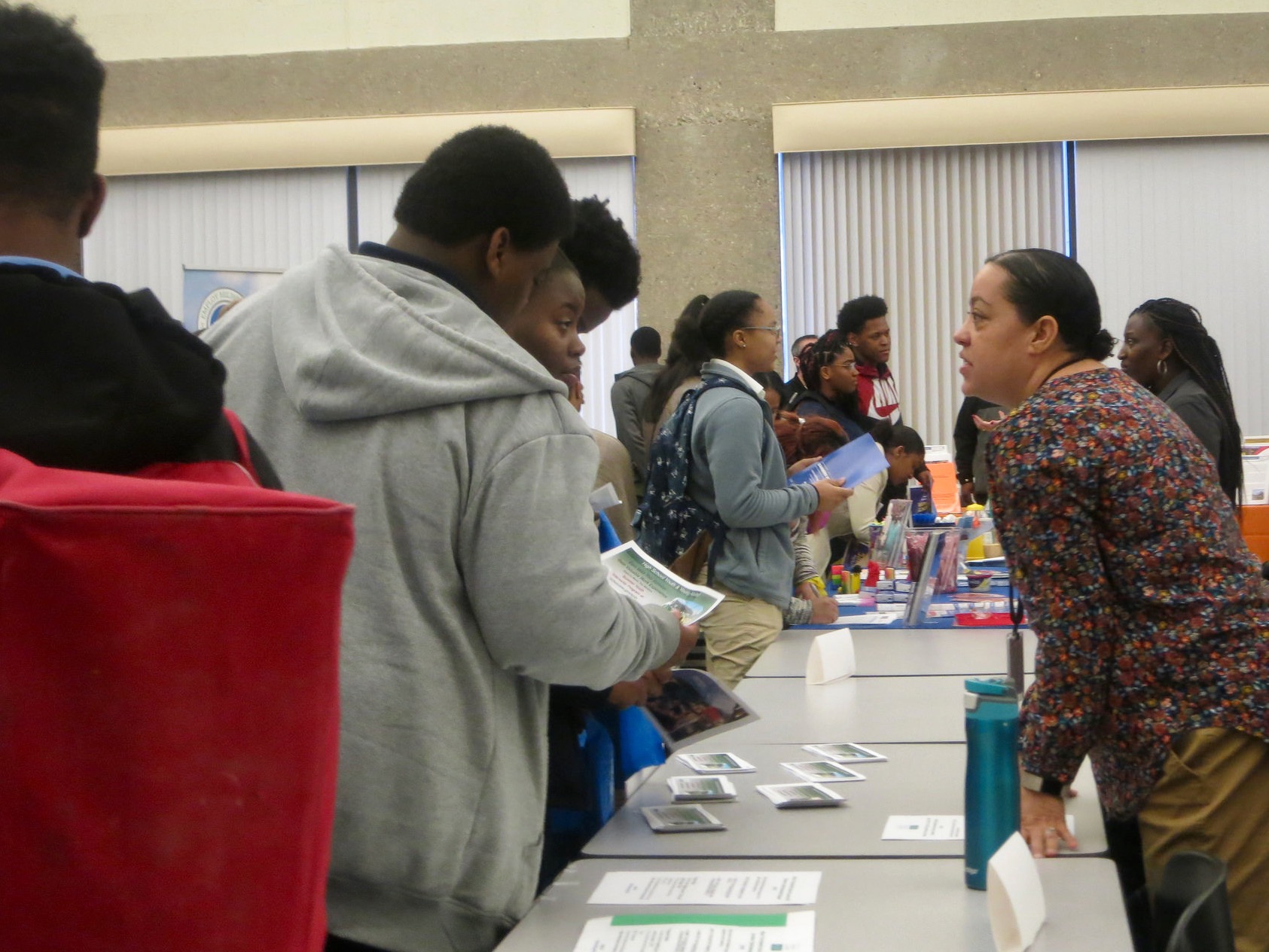 Siena Bickham talks to students about working for Milwaukee’s Earn & Learn program during the summer. (Photo by Talis Shelbourne)

Erik Fowler, a 17-year-old junior from Bay View, signed up for the MPS job fair to explore employment opportunities and network.

“I want to go into the Air Force … to work on planes and that will help me set up my engineering degree,” he said. “If that doesn’t work out, I’ll probably become a firefighter.”

“People don’t seem to hate firefighters,” he added with a laugh, before pulling up a photo of the college he wants to attend, Red Rock Community College in Lakewood, Colorado.

Fowler was one of about 1,000 students from 26 high schools invited to Milwaukee Public Schools’ first-ever job fair, which included more than 60 employers.

The recent event was held at the University of Wisconsin-Milwaukee’s Student Union, 2200 E. Kenwood Blvd.

“Being on a college campus exposes them to the different things they can be a part of and maybe encourages them to [attend] college,” said MPS Intern Coordinator Tamara Coleman.

Kayla Hutchins, 17, came early to the event. “I’m here to fill out job applications and get hired,” she said, adding that she also would be interested in interning at UWM. She said she wants to study history at UWM and ultimately become a professor. 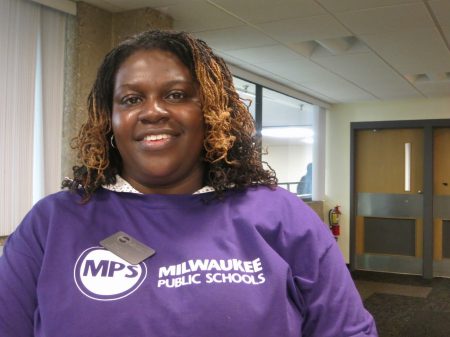 “It will help them learn in a non-academic setting,” Salzer explained. “They will learn how to think critically, problem solve and communicate better.”

BG Multifamily is a staffing company that recruits employees for property improvement firms. The company doesn’t require applicants to have a high school education, Santillanes said, but it is looking to hire leasing agents and maintenance techs interested in real estate.

“[We want] people who are hardworking and want to get into the trade … reliable people,” Santillanes added.

Students have the choice to work in any department at an office or field setting and are paid for 20 hours per week.

“We do anything from city planning to real estate,” Bickham said.

About 130 interns will be hired this year, compared to 144 last summer, according to Vanessa Armstrong, a human resources officer for the city.

Coleman said the fair is a great opportunity to expose employers to MPS’ best and brightest.

“One of our goals was to … show [employers] that we’re more than just what the news portrays,” Coleman said. “Our kids are really smart and talented, but we want them to be able to explain their experience and who they are,” she added.

Milwaukee native Daishawn Dillard, 18, said he wants to get job experience before going to Lane College in Jackson, Tennessee and eventually return to Milwaukee and work as a teacher.

Yovana Gonzalez and Rianna Laboy were among several students who participated in the National School Walkout to protest gun violence, which coincided with the fair. Students left the fair and stood on a balcony for 17 minutes, honoring the 17 Marjory Stoneman Douglas High School mass shooting victims.

“I’m here to find more career options,” Gonzalez said, “[but] I think I want to be physician.”

UWM Chancellor Mark Mone said, “It’s so vitally important for [students] to see the application of the skills they learn in school. [The fair] really reinforces the linkage between school and work.”

According to 2016 census data, Milwaukee’s unemployment rate was 17.3 percent for African-Americans and 8.6 percent for Latinos, compared to the city average of 10.3 percent and the national average of 7.4 percent.

Coleman, said she hopes the job fair will encourage students to start seriously considering their career and education options.

“I hope they [come] away being able to network and explore other opportunities in Milwaukee.”