You are here: Home / Community Voices / Race and equality: Michigan vs. Penn State
Share this... 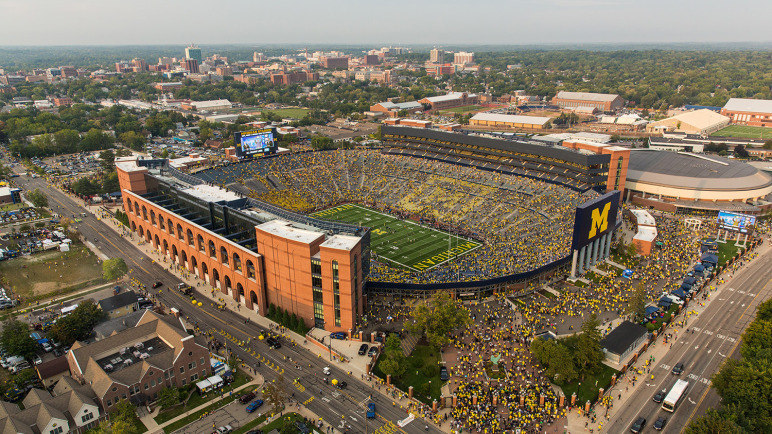 Shawn Mitchell, an Ex Fabula fellow, will tell the harrowing story below at an Ex Fabula event on Wednesday, April 25, 6:30 p.m. at PEARLS for Teen Girls. A storytelling coach will lead attendees through small group activities to help them craft stories about race and equity.

“Race trumps equality and even proper reasoning in the mind of those who believe the stereotypes falsely supported by the mainstream.” ~ The Urban Citizen

That quote really sums up my “Race and Equality” story. The incident in this story is one of the most memorable moments in my life in more ways than one: a situation where my life was in danger due to others stereotypes about race. I am proud to say that it is also about the courage of a person of the opposite race to not only see me as a person, but also help my attacker see my humanity that gave me a veil of equality that I believe saved my life.

I am an avid football fan. I played football throughout my youth and even in high school, so you can imagine my excitement when a family member contacted me about an opportunity to attend a historic matchup between two football teams: Michigan and Penn State, two of the most storied college football programs in the nation.

The relative who invited me is an avid Michigan football fan and had been fortunate enough to finagle tickets for the game from his boss, who didn’t want the seats to go to waste and thought enough of my relative to not only let him go but to also let him bring along a family member or friend.

Honored that I was invited, I went about the trek of getting on the train and riding to Pleasant Prairie, Wisconsin, where we met up and drove the four hours to Detroit, where we got a hotel room and settled in for the night.

Whenever you are really looking forward to something and it isn’t happening until tomorrow, it always feels as though tomorrow will never come. We passed the time as best we knew how: we drank beer and liquor and had a good time all night listening to hip hop classics and remembering our football days, making our wild predictions for the contest we were about to witness in just a matter of hours.

Finally, it was GAME DAY! And it was a glorious one. The sun was shining, it had to have been 60 or 70 degrees, a nice breeze and one of those great days to enjoy a football game live from great seats. I was looking forward to enjoying the traditions of a University of Michigan football game I had heard so much about the night before — the Wave and the Chants.

Approaching the stadium, you get the feeling of the history of the place. We walked at a steady pace toward the entrance, slowly passing other fans and taking in the atmosphere. In the distance, we spotted a young Caucasian gentleman running towards our direction. Naturally we didn’t know what was going on and soon after spotting the runner we spotted two Ann Arbor policemen in close pursuit.

Being Black in America we understood that this really didn’t have anything to do with us and if the police are chasing a white man we should really try to get the hell out of the way. I slid to the left and my relative slid to the right, however something strange happened in the moment of our retreat. The young white man raised his hand and pointed at me and my relative as if to say that we were with him or at worst included in whatever it was the police officers were chasing him for in the first place.

What the young man did next was perplexing, but we had no idea what we were in for. The young man slowed to a full stop and while panting heavily he stepped off to the side and pointed to my relative and I as if to say, “They are the ones, officers. There they go.” Now I told you we both played football, so we are 6-feet or better, and over 200 pounds, and we both fully understand that to some people of other races our sizes represents an instant threat.

The officers slowed to a stop one in front of me and one in front of my relative. They aggressively began to ask us for our tickets and identification. I know that many of you reading this are saying to yourselves, “They can’t do that!” but yes, yes, they can, and they did. I digress.

Living and growing up in urban areas our entire lives. me in Milwaukee and my relative in Beloit, we both realized immediately what was going on and put our hands HIGH in the air. While my relative began to calmly explain to the officer in front of him that we had tickets, a small crowd of game-goers had begun to gather, and I could feel the situation change. The officer in front of me was clearly nervous and agitated and continued to shout to me to show identification and tickets. In a moment of lapse, I hastily reached for my wallet with the tickets and my ID, and the officer became even more agitated and pulled his firearm from his holster.

I was stuck in mid-action with one hand on my wallet and another stretched way high in the air to ensure he didn’t mistake anything else for aggression. I was frozen; I knew that somehow, I needed to control the situation, so I spoke very slowly in my best Jedi voice: “Sir everything is going to be all right. Just going to give you my tickets and ID and we are going to the game, no need for any further escalation.”

When these things happen to you they always happen in slow motion as if everyone but you read a script and you’re subjected to watch it but have no control of the outcome. Seriously, that’s a nightmare for a black man.

As if perfectly scripted in that instance, a middle-aged, friendly and quite intoxicated white woman came to the rescue of what she saw as her privilege of not being shot on the sidewalk on the way to a football game. She walked right up to the officer holding the gun and yelled, “I work for the DA and you are violating his rights; put your gun away and let him show you his tickets!”

By the time the woman finished with the officer he had lowered his weapon and my relative and I were able to show the officers that we had ID and proper tickets. Turned out the young white man was trying to enter the game with fake tickets that he told the police he got from my relative and me on his way into the game. The police took him into custody. In my mind, they only believed him because we were black, and he knew they would, which is why he picked us out of the crowd to point to in the first place. The officer deeply apologized and my relative and I thanked the woman for her help.

In the end the seats were fantastic, along with the atmosphere, and while we did enjoy the game I must admit that I didn’t feel all that safe or comfortable with what had just happened. The idea that because of stereotypes about my race I could be “accidentally” seen as a suspect affected me to my core.

After the game we talked more about the incident than the football game we drove all that way to see. I have a profound respect for those who can look beyond race and see people like that woman saw me and like the officer did once he was brought back to his senses. If not for her courage and sense of equality, which even impressed me, I may not have survived, because in those moments anything can happen.

I will end my story with a poignant quote from my brilliant mother Ardelia Mitchell. “We will never be equal until we all can resist the temptation to disconnect ourselves with our race or separate ourselves with politics, divide ourselves with religion and classify ourselves by our wealth.”