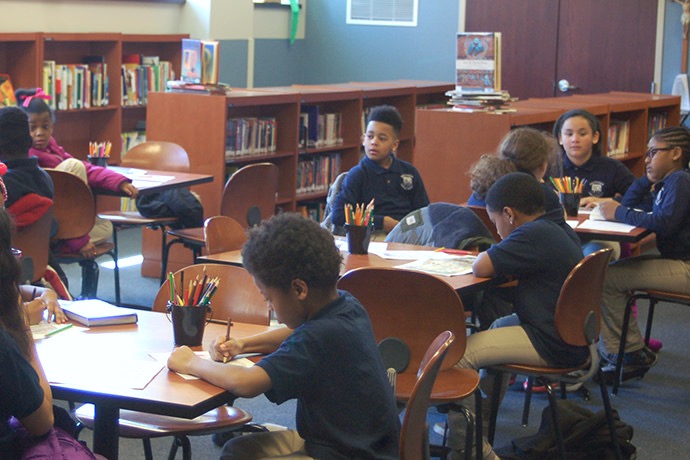 Students work on drawings in the refurbished literacy center. (Photo by Rachel Kubik)

In early 2014, Jim Piatt, president of Messmer Catholic Schools, had an important conversation with the school board about whether to make a new commitment to Messmer Saint Rose School or close it down.

The board decided to commit to the school.

Messmer Saint Rose, one of three campuses of the Messmer Catholic School system, is undergoing renovations that will cost the school $6.5 million. The building is almost 110 years old and serves more than 400 students in grades K4 – 8.

The renovations are intended to increase student safety and accessibility, and make year-round schooling possible.

Messmer Catholic Schools serve more than 1,600 students in grades K4 – 12 at three sites: Messmer Saint Rose at 514 North 31st St., Messmer High School at 742 W. Capitol Drive and Messmer St. Mary at 3027 North Fratney St. Piatt said there are projects that need to get done at the other schools, but Saint Rose was the priority. 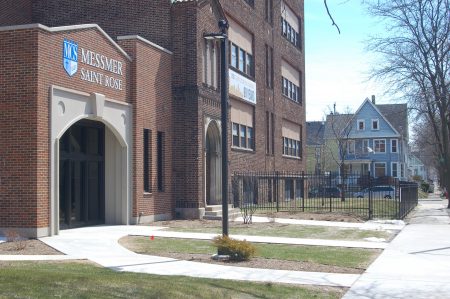 Some improvements were completed in October. “(Students) will walk in and it’s a warm, clean, friendly environment,” said Lisamarie Arnold, director of admissions and community relations at Messmer Catholic Schools. “Our hallways are big and bright.”

The front entrance sidewalk is now ground level and without stairs and an elevator was installed to increase accessibility.

A secure double entry doorway and a fence increase safety.

Air conditioning also was installed so students can keep cool when year-round schooling starts in August 2019. The goal is to ensure that children don’t lose skills during the summer.

Piatt said that a “funky cafeteria space, which was not the greatest layout,” was converted into a literacy center. A STEM classroom is now where the library used to be. Durable floors, a whiteboard and project tables occupy the room.

New LED-efficient lighting and ceilings will be added when the heating and ventilation systems are improved, before the school year starts in the fall.

The school has raised $5.6 million of the $6.5 million needed for the renovations in a capital campaign. The balance of $900,000 is expected to be raised in the next several months.

“It was an unusual commitment for a board to say that we’re going to put over $6 million into an elementary school in a part of town that other people don’t want to invest in,” Piatt said.

Arnold said the school tries to be a neighborhood partner and a great place for kids.

For example, Merrill Park Neighborhood Association is holding a flower sale in Messmer Saint Rose’s parking lot, and the alderman hosts meetings in the second-floor auditorium. “We’re really about saying yes to the neighborhood and yes to the community,” Arnold said.

She added that community members are positive about the renovations: “the fact that (we) actually, physically put money into a building in their neighborhood and that much money really shows a commitment when other places are becoming vacant.”

Tia Lee, a secretary who sits at the front desk at Messmer Saint Rose, said she’s heard positive feedback about the renovations. “Everybody likes it. They are ecstatic about the elevator,” Lee said.

Sanetran Johnson has been a Saint Rose parent since 1995. Two of her children already graduated, and another will be graduating next spring.

She initially decided to enroll her first child as a 3-year-old because it was close to Marquette University, where she was a student. However, she later fell in love with the school’s curriculum. “My daughter was learning so much,” Johnson said.

Johnson said the school was very worn down back then. She remembers that the auditorium had a rough stage and a ceiling with holes. She said safety was a concern for her before, but now it has improved.

Johnson recommends Messmer Catholic Schools to friends and she said she is proud to say her children have gone there.

Her son, Jeremiah Whitney, is a seventh-grader at Saint Rose. He said he likes the renovations and his favorite additions are the elevator and the air conditioning. “It’s nice to see something new,” Whitney said.

He said he feels safe because of the security guard staff and enjoys being at school.

Messmer Catholic Schools has partnered with community organizations such as Near West Side Partners, Marquette University, Neighborhood House, Lake Valley Camp and others.

The school system’s motto is “Founded in faith, rooted in Milwaukee, building community.”

“I get to live that every day,” Arnold said. “We really have the opportunity to transform the lives of students who lived on the margins and are sometimes forgotten in the neighborhoods that are overlooked.”

Editor’s note: This story has been updated to correct the amount of money Messmer Saint Rose has raised toward the renovations. We regret the error.