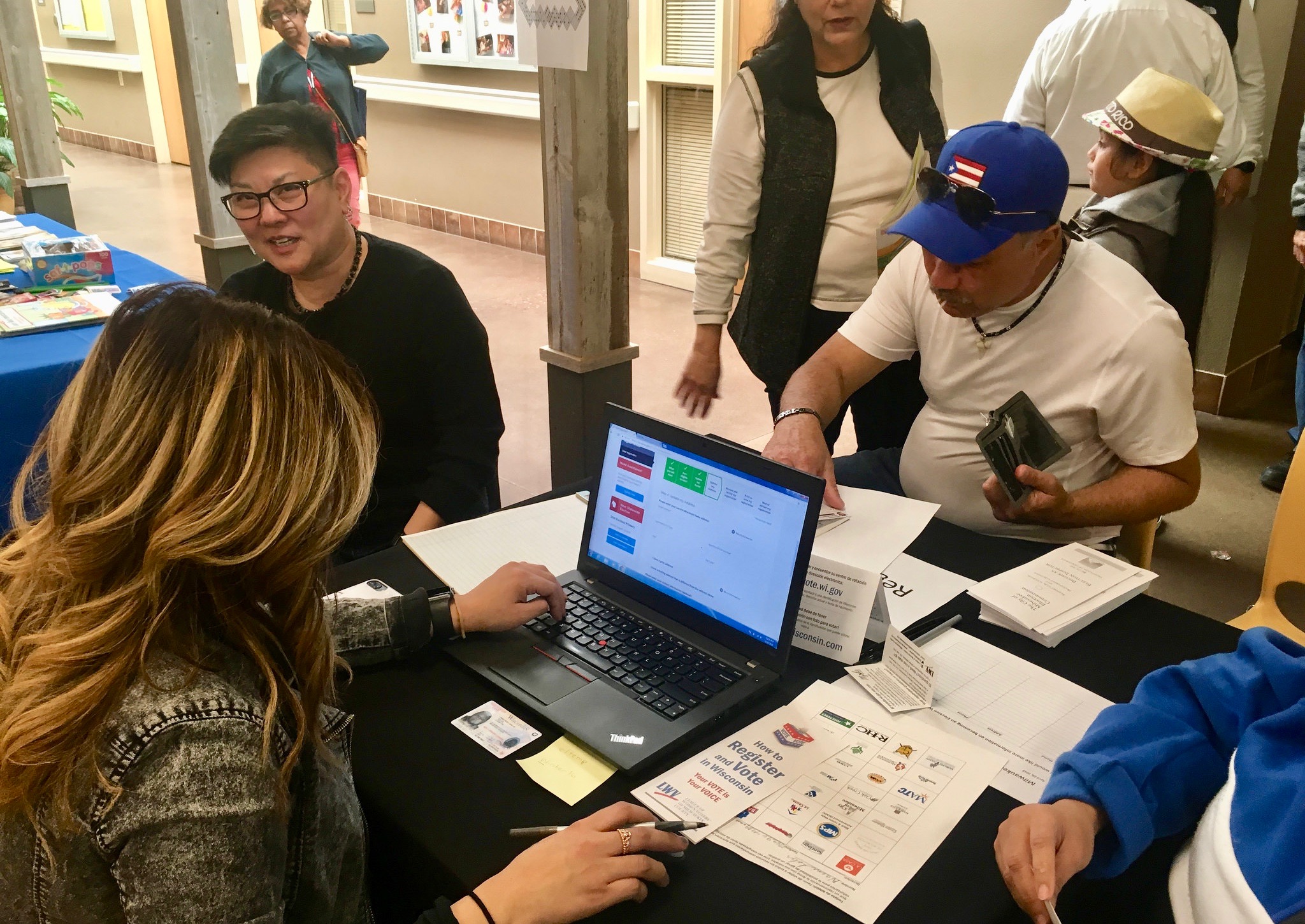 Luis Rosado Castillo registers to vote at the community resource fair for Puerto Ricans who have recently moved to Milwaukee. (Photo by Elizabeth Baker)

Luis Rosado Castillo left his home in Mayaguez, Puerto Rico, in January, due to the devastation caused by Hurricane Maria. He has liver cancer, and medical treatment became too expensive on the island. He chose to move to Milwaukee where he has family and friends and where he can afford the care he needs.

People such as Castillo who have recently moved to Milwaukee from Puerto Rico as a result of Hurricane Maria were welcomed at a community resource fair, where they could get information and talk with people from organizations offering job skills training, English classes, voter registration, insurance plans, health care, legal assistance and more. Eighty-eight families attended the event, held Saturday at the Olga Village Senior Center, 722 W. Washington St.

Castillo said he lost everything in the hurricane, and his illness makes him unable to work, but he had a smile on his face as he sat down at a table to register to vote and talked about his new life in Milwaukee. He likes the cold weather – and the beer – and he said he will be here for good.

Like Castillo, Brayan Rodriguez Morales left Mayaguez for Milwaukee this winter. He had to drop out of school, but he’ll pick up his computer science studies again at UW-Milwaukee this fall. Morales said he would like to move back to Puerto Rico, but for now, many people are still leaving the island, and it is much easier to find work in Milwaukee.

Morales shares an apartment with family members, so he attended the resource fair to learn more about finding a place of his own. 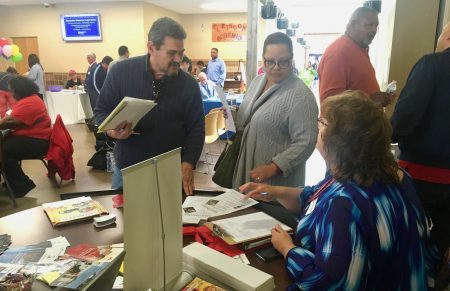 Husband and wife José Rodriguez and Maria Cotto have also lived with family and friends in apartments for the several months they have been in Milwaukee. They came to the fair looking for information about obtaining a home of their own. They said it was difficult to leave their city, Carolina, in Puerto Rico, but it is deteriorating and has few job opportunities. Rodriguez has a doctorate degree in education, and Cotto has her master’s in nursing. They both take English classes so they can obtain good jobs here in Milwaukee.

Housing, education and employment opportunities are the three main needs for most Puerto Ricans arriving in Milwaukee, said Ald. José Pérez, who introduced himself to attendees and informed them about city services and how to contact their local representatives.

Pérez, originally from Puerto Rico, said he sees a growing need for community events such as the resource fair as a result of the influx of people coming from the island in a short amount of time. The city keeps no official records of Puerto Rican migrants, but the Milwaukee Public Schools Board of School Directors reported in December, 2017, that 270 students from Puerto Rico enrolled at MPS schools after Hurricane Maria.

“I think in general the city needs a welcoming center, a welcoming place where any immigrant that comes to prosper should have some orientation to the city,” Pérez said. “It’s important that we build upon this to make it more of a permanent place and structure. When we coordinate these resources, people will succeed.”

The community resource fair was organized by Alberto Maldonado, director of the Roberto Hernández Center at UWM, and Andres E. Gonzalez, vice president and chief diversity officer at Froedtert Health, both of whom are originally from Puerto Rico.

Maldonado said this is the first time he has worked on an event like this in the 29 years he has been in Milwaukee. He first came from Puerto Rico to attend UWM. “I think it’s now our turn to pay it forward and to welcome other Puerto Rican families the way we were welcomed once to the city,” he said.

The event planning team will soon hold a debriefing session to ensure all the families who attended are served and connected to appropriate services, Gonzalez said.

Maldonado said he and Gonzalez will also create a website with the mayor’s office that can serve as a virtual welcoming site for the families, with resources and contact information. They hope to continue hosting resource fairs as Puerto Rican families continue to migrate.