You are here: Home / Posts from Community / After 200 Nights of Freedom, March On Milwaukee 50th plans finale to recognize Open Housing Marchers and reignite the next generation of activists
Share this... 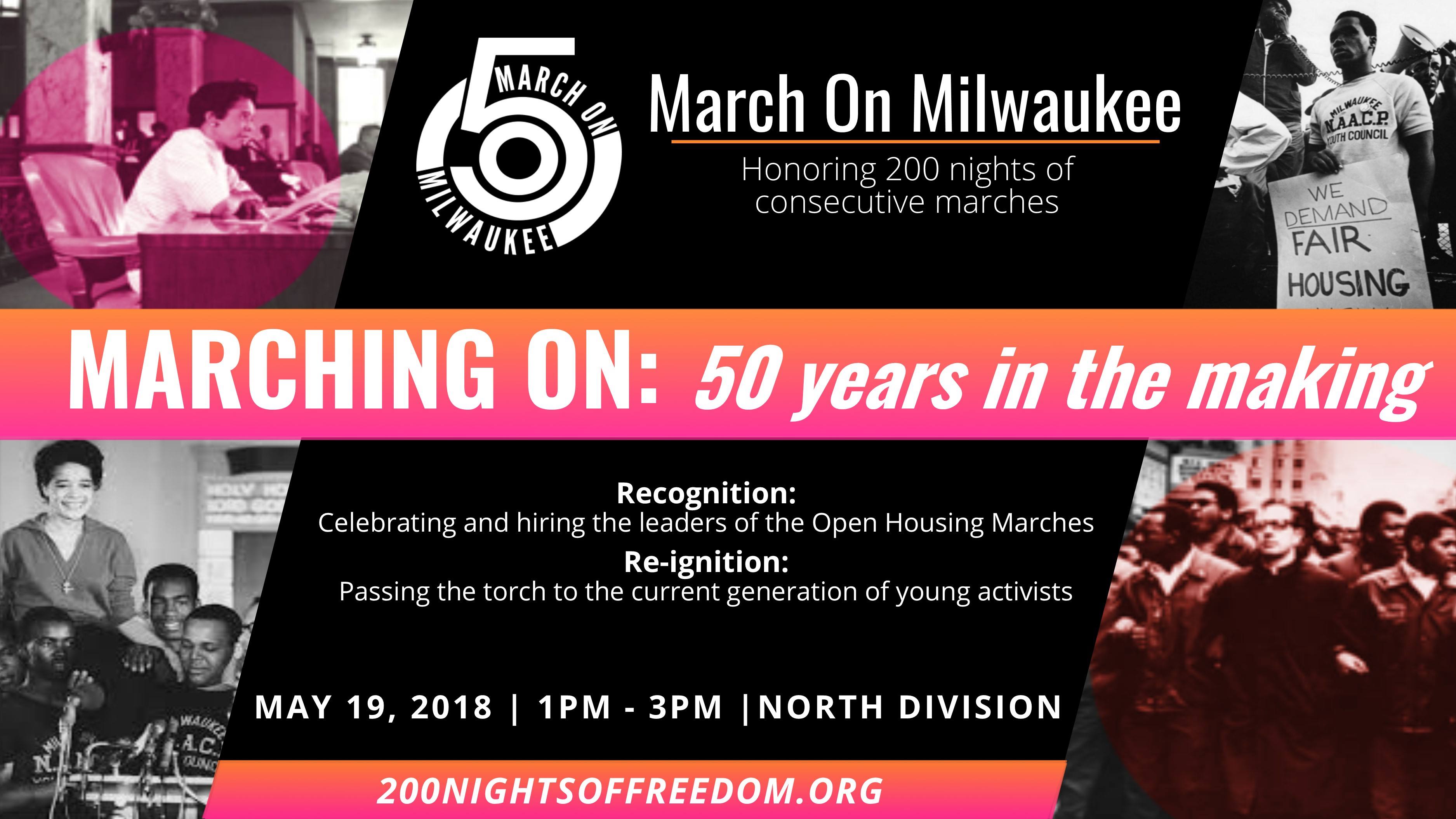 The Midwest’s role in civil rights history is often overlooked. Milwaukee itself has neglected its civil rights past. As the 1967-68 Open Housing Marches passed into history, this period in Milwaukee came to be remembered more often as “the year of the riots” rather than an inspiring and nationally-significant demonstration of nonviolent direct action. As the 50th anniversary of the Open Housing Marches draws to a close, the Milwaukee community is invited to make a vow — to teach this vital history to a new generation and ensure that it becomes part of the story we tell ourselves about Milwaukee for the next 50 years, and beyond.

To formally recognize the contributions of the marchers in 1967-68 and reignite a spirit of activism in Milwaukee, March On Milwaukee 50th is inviting the community to gather for the finale of 200 Nights of Freedom on Saturday, May 19th. Events will be centered at North Division High School, which stands next to the former site of St. Boniface Catholic Church, where each march in 1967 and 1968 began and ended.

Public events will kickoff with a “Thank You” Bus Tour (11:30am-1pm), where current youth activists join former NAACP Youth Council members and Commandos as they trace the history of the Open Housing Marches through the city. This is a unique opportunity for different generations to learn from and inspire each other. Throughout the tour, the buses will stop at key historical locations where the public is invited to come and say “Thank You” to the original marchers — full schedule and more details can be found here.

After the tour, a community celebration entitled Marching On: 50 Years in the Making (1-3pm) will take place at North Division High School. In the spirit of Recognition, we will honor the remarkable accomplishments of Milwaukee’s unsung Civil Rights heroes, the NAACP Youth Council and Commandos, who along with Father James Groppi embraced the efforts of the Honorable Vel Phillips in the fight for fair housing and freedom for all people. In the spirit of Re-ignition, we will also spotlight youth activists who continue the struggle for justice today. More information and RSVP can be found here.

Congresswoman Gwen Moore will deliver the keynote address, sharing personal memories of the Open Housing Marches and reflections on her mentor, Vel Phillips, while at their shared alma mater, North Division High School.

All are welcome at this free event, whether you were on the frontlines 50 years ago or this is your first time hearing of this history. Additionally, Making About: Recognition and Re-ignition, an event where community members can make signs and write thank you notes for the marchers, is being held on May 16th at Escuela Verde — more info here.

March on Milwaukee 50th is an intergenerational group of organizers, artists, professionals, academics and original marchers. Over 200 community individuals, organizations and institutions have participated in the planning process.

Drawing inspiration from the timeline of the Open Housing Marches, 200 Nights of Freedom is an initiative that has featured over 200 nights of public events and programming reflecting upon, documenting, and reviving the spirit of the marches.

About March On Milwaukee 50th