You are here: Home / Home / Carousel / Youth share struggles ‘to give a face’ to mental illness
Share this... 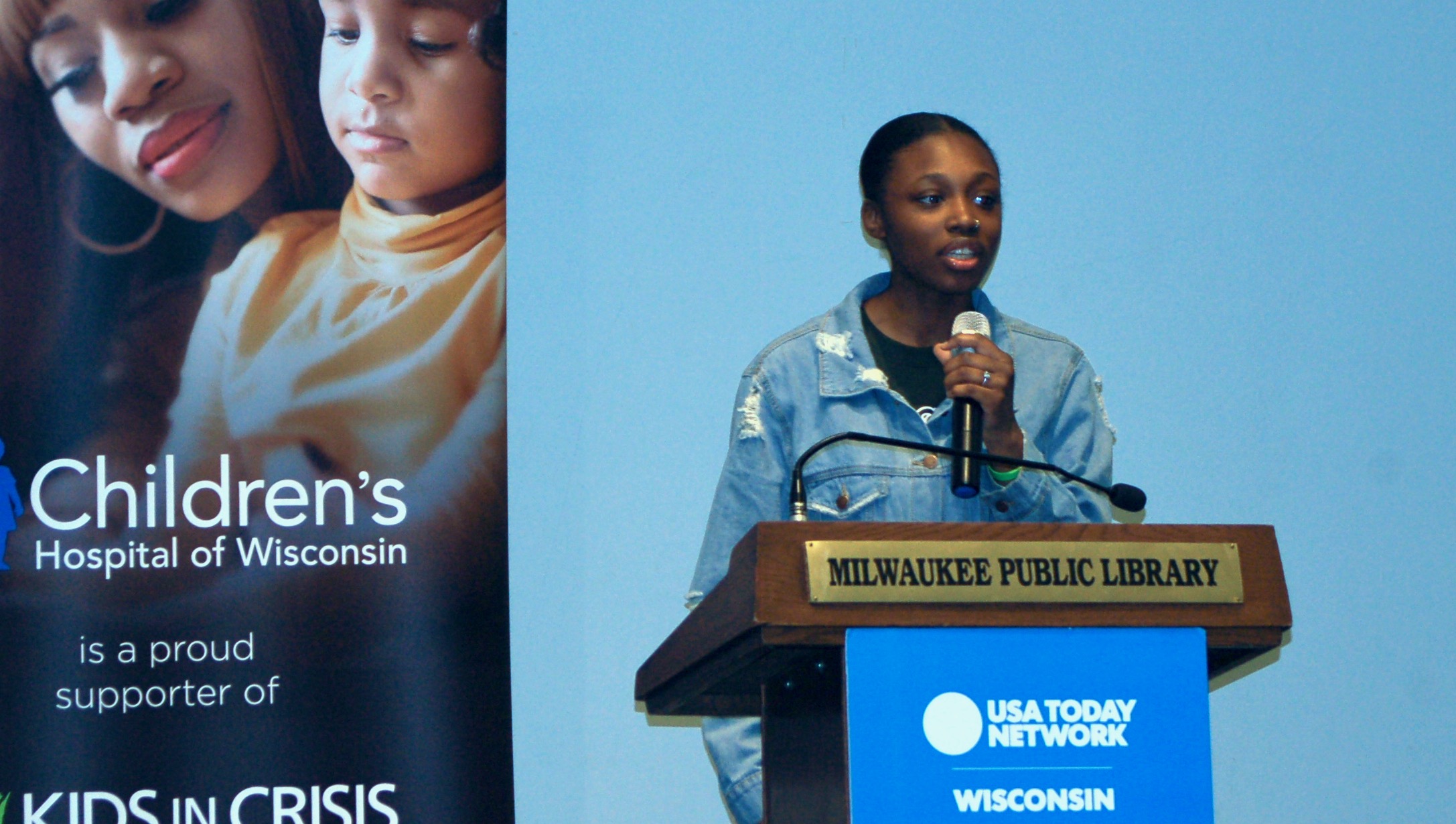 Erica Williams-Clark told how she went through confusion and hardship after she lost her cousin to suicide, and it inspired her to pursue psychology in college. (Photo by Rachel Kubik)

As an infant, Ci’Yanna Jones was known as a “crack baby” because her mother was addicted to crack cocaine. Jones struggled with that label as a child. Her self-harming habits started at the age of 5.

“I wasn’t really focused on the toys and having fun. I was focused on using things to hurt myself,” said Jones, 16.

Her biggest support came from her grandmother, who took Jones home, loved and cared for her. “I love her to death. I would take a bullet for my (grand)mama,” Jones said.

She recently shared her experiences via a video in front of an audience of more than 120 people at Loos Room at Centennial Hall, in the Milwaukee Public Library. Images, text and a poem told the story.

Experts also provided information on mental health, and representatives from community organizations shared resources before and after the presentations. The Milwaukee Journal Sentinel and the National Alliance on Mental Illness (NAMI) teamed up to sponsor the event.

Brenda Wesley, a mental health advocate and the emcee, said she wanted the event to increase awareness surrounding mental health.

Wesley has a son and sister who live with mental health disorders. “We have to decrease stigma and open up more doors and access for treatment.

“What we can do individually is to listen, be aware, not sit in judgment (and) support,” Wesley said.

Jacquelyn Smith, a pediatric psychologist at Children’s Hospital of Wisconsin, spoke to the audience about supporting transgender and gender non-conforming youth.

She said it can be highly beneficial for youth to share their stories of struggles publicly, assuming they are in a healthy place and have the support to do that.

Telling stories of past hardships also can improve students’ confidence and self-esteem, Smith added. “It lets youth know that they’re not alone and that people care.”

Smith noted that often youth with mental health issues are more resilient, open and creative than adults. “That’s probably one of the things I enjoy most about my job, to walk those really rewarding journeys with them and see them try new coping skills, feel better and be successful.”

Smith added that the event brought topics that she addresses every day to the community in a novel way. “It’s really important to me to be able to be a part of events like that and help the community understand that pediatric mental health is something that we have to pay attention to,” Smith said.

“From an audience perspective, it makes stories personal and real and I think in some ways that carries more weight than research stories and the published literature that’s out there,” Smith said. “It gives a face to things that we know kids struggle with.”

Alex Hart-Upendo was bullied starting at the age of 5. He was smarter than many children his age, so he became isolated and soon became depressed.

“No matter how many times I heard my mom say I was a good person or that I was beautiful, I still felt like she was lying. Why did she only think good things about me when everybody else said I was stupid, ugly (and) worthless?” Hart-Upendo said. He would spend a lot of time in the nurse’s office at school and pretend to be sick so he could go home.

Now 11, he finds pleasure in owning a bowtie business, creating and selling custom bowties for the past two years. “I think that everyone on this earth has a purpose, and mine is bowties.”

Hart-Upendo said he was motivated to “let people know that kids being bullied don’t need to get tougher skin.” He said they do need to tell a parent or friend.

Reyna Saldaña started her story about struggling with foster care, anger management and depression by sharing a journal entry she recently found in a storage unit. She wrote the entry when she was 10 and it explained her dreams for normalcy and that she hurt other people because she hurt inside.

Saldaña, 19, lost her mother at a young age to cancer. “I would rather die than live without the people I love,” the journal entry said.

Her anger caused her to say mean things to others. She said people called her a monster. “On the outside, I was like, ‘Oh, I don’t care.’… But on the inside, I was hurting, so I was just like, ‘How could I do that to someone? How could I hurt someone like that? I don’t even know them.’”

Jones said she would like to help mothers who are addicted to drugs, because she doesn’t want anybody going through what she went through. “I just thought, if I were to tell my story, it would make a difference,” Jones said.

The last line of her poem — “If I only knew I was perfect in my own way from the beginning” — elicited an eruption of applause from the audience.

Smith commented that mental health concerns are a part of life for many people, just like other health issues.

She said she hopes people can become more comfortable having conversations about mental health. “There’s people who need help who don’t get it because they’re concerned about what others might think,” Smith added.

Wesley said she would advise someone struggling with a mental illness that he or she is not alone and recovery is possible. “What recovery looks like is different for everyone. … It’s what makes you happy in your life. That’s your recovery.”