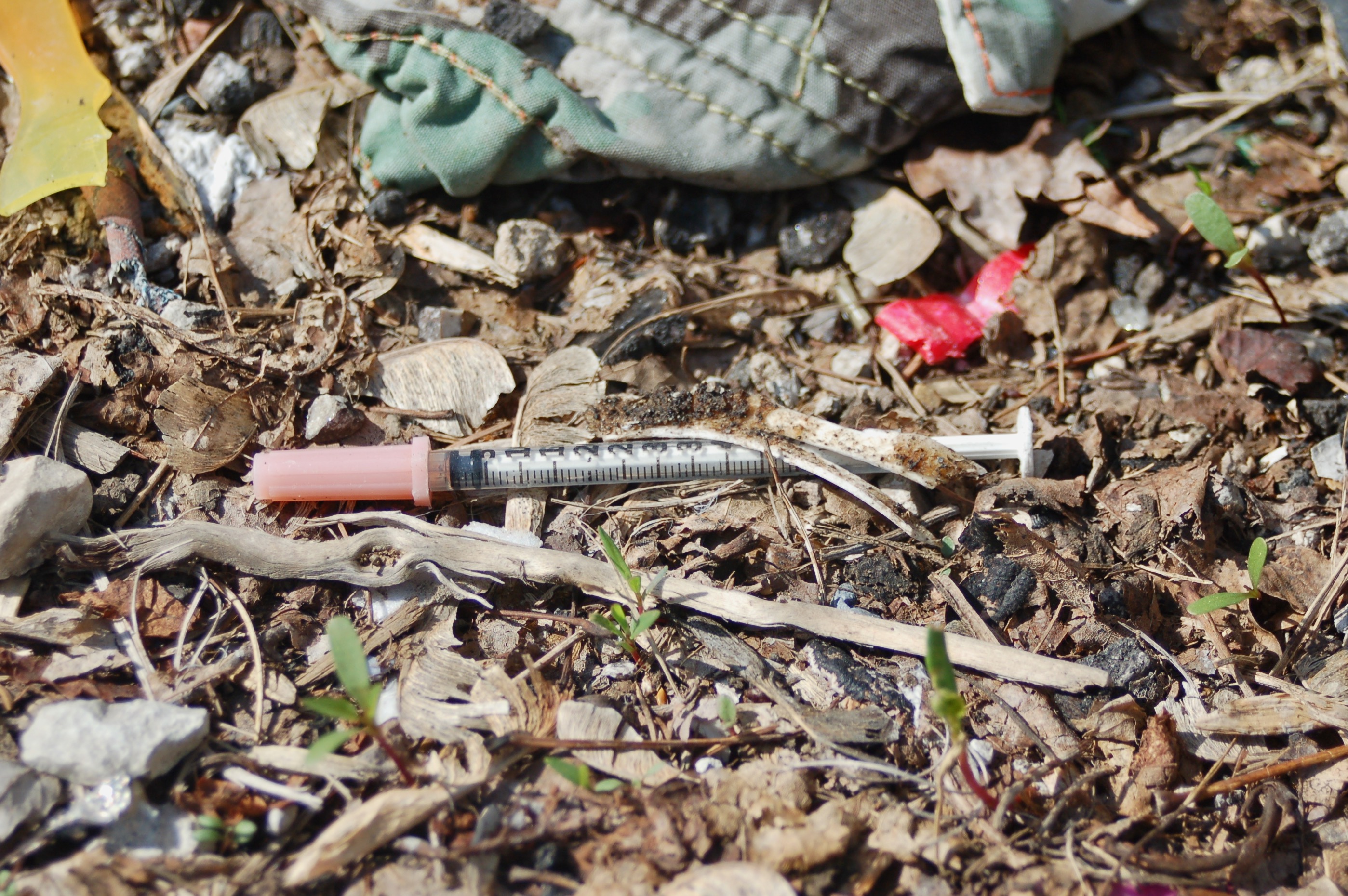 A discarded needle lies in an alley near West Greenfield Avenue. (Photo by Edgar Mendez)

Carianne Ramanio, 42, is three months pregnant and nine months clean from heroin. Her addiction journey began at 19, she said, as she went from cocaine, to legally prescribed pain pills, to pills bought on the street and eventually heroin.

“I overdosed a couple times. I almost lost my hand due to an infection. I’m done with it,” said the determined grandmother of three who’s spent the majority of her life on Milwaukee’s South Side.

Ramanio, who was revived after her overdoses by Narcan, a drug that reverses the effects of opioids, said she’s lucky to be alive. Others weren’t as fortunate. There were more than 400 drug overdose deaths in Milwaukee County in 2017, more than 300 of which involved opioids. Through the first three months of 2018, 56 opioid-related deaths occurred. That number will rise. Determinations still need to be made on 41 additional toxicology cases, according to Karen Domagalski, operations manager for the Milwaukee County Medical Examiner’s Office. Last year there were 78 opioid-related deaths in the county from January through March. 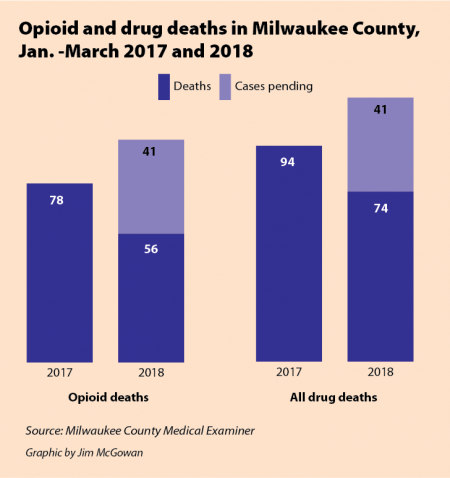 The pace of drug overdose deaths in 2018, including six that occurred during the weekend of May 12 and 13, is similar to last year, according to the medical examiner’s office. Two of the recent six deaths occurred in the 53204 ZIP code on the South Side, which is where the highest number of opioid overdose victims through the first three months of 2018 resided. Increases in drug activity and prostitution, which is strongly connected to the opioid epidemic, have contributed to a rash of seven homicides that have occurred within a 20-block radius in 53204 since March.  Several of the murders remain unsolved.

As the deaths accumulate, a preliminary plan to reduce fatal overdoses of opioids and other drugs has been released by the City-County Heroin, Opioid, and Cocaine Task Force.

The plan consists of eight focus areas including: enhancing and funding existing prevention programs; reducing the number of drug violation arrests; improving epidemiology and surveillance; developing programs in collaboration with the criminal justice system; and supporting federal, state and local policies and legislation. The plan was originally scheduled to be finalized by February, Bevan Baker told Milwaukee Neighborhood News Service in a December interview. At the time Baker was the task force chairman and commissioner of the Milwaukee Health Department (MHD). Baker resigned in January amid an avalanche of criticism over his handling of the city’s lead poisoning crisis.

Baker’s departure, along with that of Hector Colon, the first task force chairman, and overall disarray within MHD, delayed the release of the comprehensive plan, acknowledged Ald. Michael Murphy, co-chair of the task force with Michael Lappen, administrator of the Behavioral Health Division (BHD) for Milwaukee County. The group also had difficulty gathering a quorum and scheduling meetings since it was created in February 2017.

“There are certain things I can’t control and others I can,” Murphy said.

Despite those difficulties and the daunting challenge of slowing the pace of drug deaths in the county, Murphy said he is confident that the partnerships and collaborations created through the group, which are now part of the comprehensive plan, will have an impact. 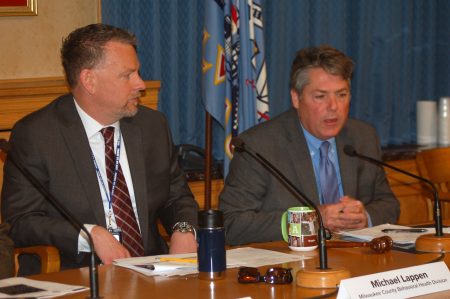 “I think in the past people worked in their own silos and what the task force tried to do is recognize that with limited financial resources we need to support each other. We’ve broken down some of those borders,” Murphy said.

Ongoing efforts that have been strengthened through the task force include increases in funding specific to the opioid epidemic, more locations to dispose of prescription pills, increased distribution of needles, and more access to and training to administer Narcan, Murphy said.

Also in the works is a collaboration with Medical College of Wisconsin (MCW), which will provide recommendations to the task force on best practices or promising approaches to treat those who are addicted to opioids and other drugs, Murphy said. A social media campaign to help reduce the stigma associated with opioid addiction and to try to prevent young people from becoming users also is being planned, he added.

Another aspect of the plan will be to target individuals who recently overdosed, according to Lappen.

“The idea is to follow up within 24 hours and tell them, ‘Hey, you just almost died. What can we do to help you?’” Lappen said.

That effort, which is also a collaboration with MCW, will include hiring people with lived experience with opioid addiction, he said. The program will be supported through a $250,000 grant awarded by the Wisconsin Department of Health Services (DHS) to Milwaukee County to expand treatment for opioid addiction. 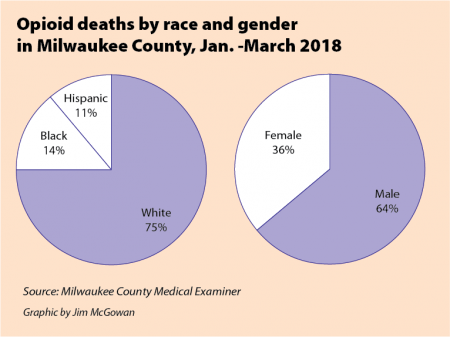 According to data included in the task force’s preliminary plan, 75 percent of individuals with substance use disorders never receive treatment. In addition, 70 percent of the state’s prisoners have a substance abuse problem, with only 10 percent receiving treatment while incarcerated, according to estimates by the Wisconsin Department of Corrections. Lappen said it is important for the plan to take a public-health approach and treat addiction as the disease that it is, rather than focusing on the issue through a law enforcement lens.

“There will be a number of collaborations to make sure people are getting treatment instead of being criminalized,” Lappen said.

While the plan released by the task force holds promise, said “Tina,” a 35-year-old woman who is battling an opioid addiction, nothing will change until treatment is more readily available in the central city.  Although she said she’s no longer taking the opioid pills she spent the last decade addicted to, she now she waits in line each morning for her daily dose at the methadone clinic.

“It’s like I switched from one addiction to another,” she said.

Tina, who requested not to be identified by name, has gone back and forth between suboxone, a drug that blocks the effects of opioids but is also addictive, and methadone, because they are the main treatments available, she said. She remains at risk for going back to pills because once the physical pain that accompanies the withdrawal goes away, individuals are left with the residual damage from their addiction.

“It’s like all the emotional pain that you took the drugs to forget comes back all at once. That and the guilt you feel because you lost your family because of the mistakes you made while you were addicted is really difficult to handle,” she said.

That burden, coupled with difficulties in getting a job due to a criminal record, leads many to go back to heroin or other drugs, she said. “Without coping skills to help you get adjusted to your new life, it’s a lost cause.”

Ramanio has remained drug free since August, after taking methadone and suboxone for seven days while detoxing in jail, she said. Prior to that, she’d gone through inpatient and outpatient treatment. Sitting in jail and reflecting on the fact that she is a grandmother, and that she had thrown decades of her life away, helped her finally quit, she said.

“I had to sit down and look at myself. It’s not a good look for a 42-year-old grandmother to be on heroin,” she said.

She also moved from Milwaukee in October, which has helped, she added.

Ramanio said she might make her way back to the city someday, hopefully to start a rehabilitation program for women getting out of prison. Her goal would be to help them find housing and connect with companies that would give them jobs.

“I want to give them a chance to enter back into a society where they feel good about themselves and are actually progressing in life. I’d like to be a success story for them.”