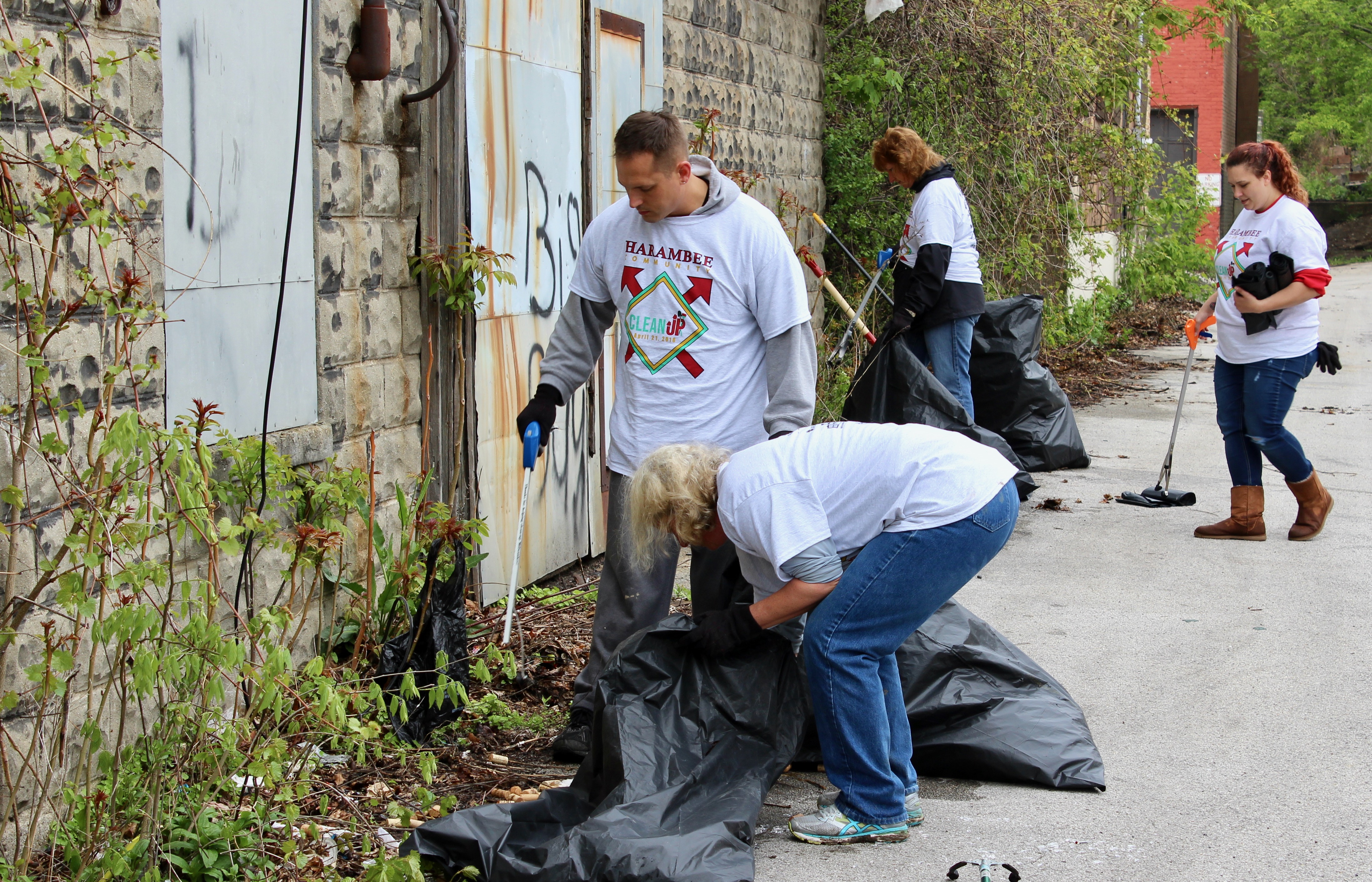 Volunteers scoop debris, including an abandoned collection of wine corks, into trash bags behind a building. (Photo by Mark Lisowski)

As a group of volunteers bent and scooped up trash from a yard adjacent to Locust Street in the Harambee neighborhood, a car pulled over to ask what was going on. When the driver learned about the massive cleanup project, he parked his car and began picking up trash.

“It’s been great today; the residents are happy,” said Adrian Spencer, drug free communities manager at Safe & Sound. Spencer helped spearhead the cleanup in Harambee and hosted a registration booth at Clinton Rose Park, one of five booths spread across the neighborhood

“We went knocking on doors, sat in a lot of meetings,” she said. Spencer and other community organizers had been planning the event since October. About 15 organizations pitched in to plan and support the neighborhood cleanup, which originally was scheduled for April 21, during Earth Week, but was cancelled due to snow.

While the weather was chilly and overcast, the forecasted rain held back and volunteers bundled up to pick up trash across the city streets. “I would have been out here in a kayak picking up trash if it rained,” exclaimed Spencer. 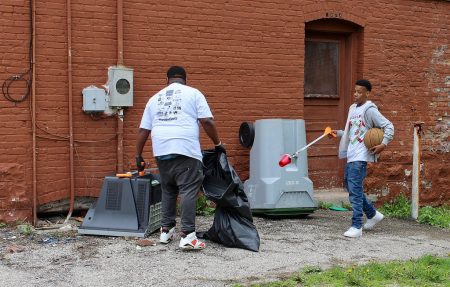 “I would have brought the sun out,” said Fidel Verdin, co-executive director of True Skool and a volunteer at the cleanup. Verdin was enthused with the commitment of volunteers to cleaning the city streets.

“This guy just jumped out of his car [and] picked up a shovel,” Verdin said. “It’s about bringing people together,” he added. He noted that it is important for youth to volunteer with their families in their community.

Bader Philanthropies initiated the idea of the cleanup to give back to the community, which recently became the organization’s home. Bader was the primary fiscal sponsor of the cleanup, and shouldered expenses that included most of the tools. Johnson Bank contributed $500 for water.

“We wanted to say ‘we’re a neighbor,’” said Frank Cumberbatch, vice president of engagement at Bader Philanthropies. The organization originally planned to host a volunteer event at a local food pantry, but Cumberbatch and other organizers wanted to go big and decided to host a community cleanup.

“We wanted to go large scale to grab people’s attention,” he said. The aim was to organize the largest volunteer community cleanup in Milwaukee, with a goal of 1,500 volunteers. While most volunteers participated on the cleanup day, four schools — Martin Luther King Elementary, Carmen South High School, Hope Christian High School and Riverside High School — sent groups of student volunteers to clean the day before the event.

“We started slow, but our hearts were in the right place,” said Cumberbatch, adding that he hopes the community cleanup expands to all Milwaukee neighborhoods in the future.

Residents walked through the neighborhood, picking up trash wherever they spotted it.

“I was impressed with how much we cleaned up. I took before and after photos,” said Brenda Koehler, a volunteer who regularly participates in neighborhood cleanups. “[We got] better equipment for this cleanup. The bags were more sturdy,” she added.

All volunteers received cleaning supplies, including brooms and rakes, which they were allowed to keep after the event. “We want to give people tools to use,” said Coggs.

“I only had 10 shovels left at the end,” said Spencer. She supplied volunteers with 70 shovels and 240 pickers at her booth alone.

The neighborhood cleanup concluded with a celebration, held at Clinton Rose Park from noon to 4 p.m. Volunteers grilled food including hamburgers and corn on the cob, and affiliates of True Skool provided music.

In all, about 15 organizations, 11 churches, four schools and nearly 1,000 community members participated in the cleanup. Although that fell short of the goal of 1,500 volunteers, the Harambee cleanup — the first of its size and scope in Milwaukee — was considered a success.

“Our aim is to promote safe, happy and healthy neighborhoods,” said Spencer. She and other organizers said they plan to host future cleanups in Harambee.