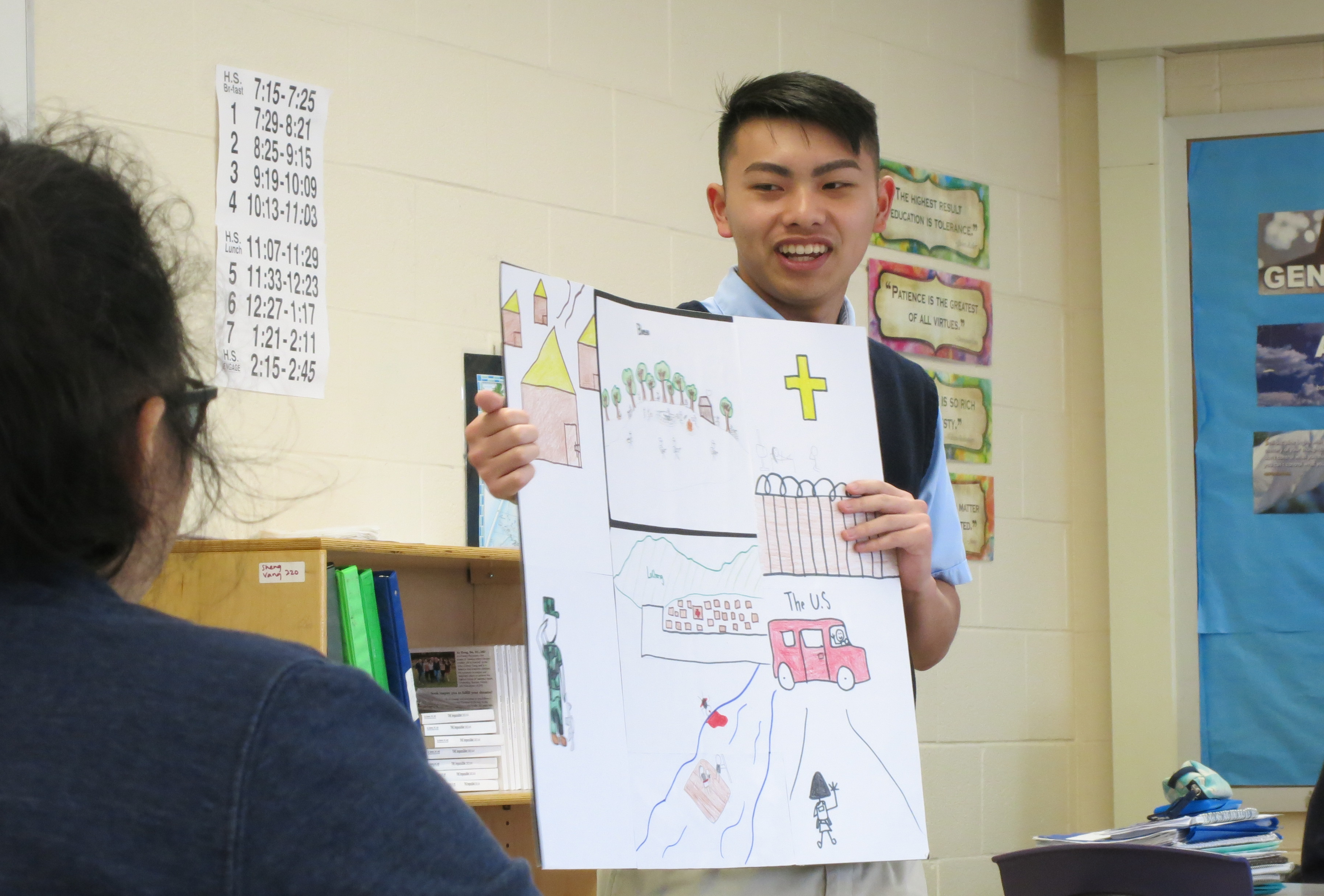 Peevxm Vang shows a poster about his grandfather’s journey from the Hmong Army to America. (Photo by Talis Shelbourne)

Der Yang’s grandmother, mother and aunt swam across the Mekong River to Thailand from Laos to escape the violence in their native country.

The dangerous journey made by many Laotian Hmong refugees often resulted in injury or death.

“My [second] cousin lost one of his legs when he stepped on a mine,” she said.

Yang, an 18-year-old senior at the Hmong American Peace Academy, presented this story in the form of a song as part of Chingcha Vang’s elective “Southeast Asian History” class.

All graduating seniors at HAPA have the opportunity to take the class, which concludes with Vang’s two-week “Hmong Experience Project.”

Vang is a second-year corps member of Teach for America, which stresses cultural awareness as part of instructional success. He teaches 10th and 12th graders at HAPA, where 98 percent of the students are Hmong-American.

His Hmong Experience Project involves students interviewing a Hmong family or community member, developing a creative presentation, unveiling their work to the class and writing a paper. 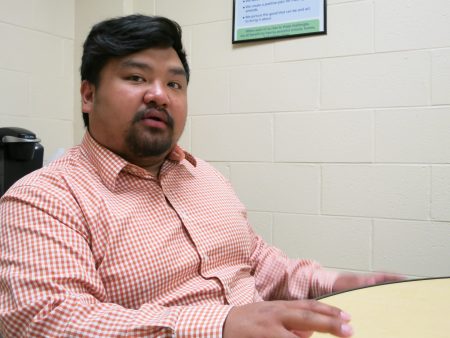 Chingcha Vang says it’s important for his students to be proud of their heritage. (Photo by Talis Shelbourne).

But in Milwaukee, where the majority of Asian-Americans are Hmong, the project is worth more than a grade.

For example, Vang said one of his students who completed the project saw a different side of his grandmother.

“He saw that she has so much passion for her culture and that motivated him to connect with her a lot more and now he spends more time with her.”

Vang said he was inspired to create the project by his experience growing up in Wausau, Wisconsin as a Hmong student with parents who were Laotian refugees.

“In the schools I went to, [I was] always feeling different and trying to fit in — trying to become white,” he said. “And then in college, I was trying to figure out why I [wanted] to assimilate and become white. Once I was able to find my identity and find my cultural roots, I became happier.”

Vang said embracing his identity encouraged him to participate in spoken word events, where he was able to creatively express his Hmong heritage. Now he wants his students to have that same opportunity.

“I want students to start thinking critically about their Hmong identity earlier than I did,” Vang said.

Vang pointed out how language barriers often contribute to the generational divide between Hmong-American children and their parents and grandparents; most of his students cannot speak, read or write Hmong.

However, the project allows students to bridge this gap and reap benefits that last long after graduation.

“Most of the time, the parents and grandparents do not speak any English and these amazing personal stories go unheard. [The project] is a great opportunity for students to connect to their culture,” he said.

When Jordan Yang interviewed his grandmother, he said that he learned new pieces of his family history.

“I didn’t know my grandmother had two other siblings because they died in Vietnam,” he said, adding that his grandmother and other relatives fled through the jungle.

During her presentation, Lee wrote a diary entry describing how her grandmother swam across the Mekong River with a baby — Lee’s mother — on her back.

“They had to travel at night so the guards couldn’t see them,” Lee said. “My grandpa lost his brother while running through the Mekong River because he stepped on a mine.”

Lee said the project was important to her because it helped her learn new details about her family and her heritage.

“I like [the class] because no one really knows about Southeast Asia,” she said.

Maggie Nestor, Vang’s instructional coach at Teach for America, said that it’s important for students to feel represented in the classroom.

Vang’s presence in the classroom, and the fact that he says, ‘I love you,’ to his students after every class, create a strong teacher-student bond.

“I am in a unique position teaching a bunch of young kids who look, sound and feel the same way I do. I want them to know I care about them and that I see them as people and not just test-takers. I want them to own their identity,” he said.