You are here: Home / News / Arts and Recreation / Arts @ Large to celebrate beginning of historic building renovation
Share this...

After “bursting at the seams” for two years, Arts @ Large will celebrate the start of its renovation project at a construction kick-off event Tuesday.

The celebration will take place two weeks after the nonprofit closed the financing package of the building, which Arts @ Large purchased in May 2016. Milwaukee Mayor Tom Barrett and Alderman Jose Perez are expected to speak at the 9 a.m. event in front of the building, 1100 S. 5th St.

“We’ve evolved from a K-12 organization to a lifelong learning organization,” Arts @ Large Co-Founder Teri Sullivan said. “We see people of all ages from our community using this center as their home, making it their home and their creative space.”

The past two years have been filled with securing funding and partners, including The Kubala Washatko Architects, Inc. and Catalyst Construction.

The $6 million financing deal includes federal and state historic tax credits and new markets tax credits, which together contribute $3.3 million. The nonprofit raised $1.2 million and hopes to raise the remaining $1.4 million to pay off its loans before the planned grand opening in July 2019.

The historic tax credits require Arts @ Large to work with the National Parks Service to preserve the historic features of the building, according to Brianna Seipel, the director of communications and development. 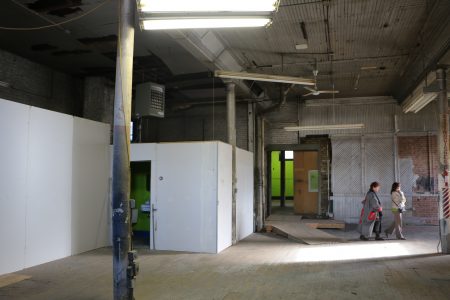 “Particularly with the exterior of our building, it has to look like how it would’ve in the 1890s, which is really cool,” Seipel said. “It’s also limited us in terms of what kind of signage we can do, but we wouldn’t have it any other way.”

Seipel said the tax credit requirements will end in about six years. Arts @ Large is looking to install a garden on the roof at that time.

Arts @ Large was co-founded by Sullivan and Kimberly Abler in 2001 as a Milwaukee Public School program. In 2005, it became a nonprofit. Looking back on the past 17 years, Sullivan said it does not surprise her that the organization is taking this step.

“You really have to be a risk-taker when you’re an entrepreneur, and that’s kind of what this nonprofit is,” she said. “It is and has become its own driving force in the community, well beyond the founders.”

The building was constructed in 1890 by Patrick Cudahy. Throughout the years, it has served a number of different operations, including a meat market.

Most significant to Sullivan and her team, however, is the building’s previous role as “The Polish House,” a recreation and art center that opened in 1938.

“The site became a gathering space for children of all nationalities including Polish, German, Greek, Norwegians and Mexicans, and was in use almost every night for arts, theater, music and community events,” according to an Arts @ Large’s media release.

“We feel as if this has come full circle. (The Polish House) would have music events, they would have art-making and crafts,” Sullivan said. “We were reading about it and we thought, ‘Oh my gosh, this is exactly what we’re going to do.’”

Hugh Swofford, a former member of Historic Milwaukee’s board of directors, is researching the history of the building for Arts @ Large. He said he began looking into the building out of simple curiosity at first.

Swofford now has a one-year contract to research the building as well as to help create text panels that will be displayed on the first floor. The panels will relate the building’s history from 1836, before it was built, to the present.

“It’s been very interesting, and we’ve uncovered a lot of interesting things about the building and its occupants,” he said.

Looking forward, Sullivan said the three-story building will have a cafe and coffee house, a student art gallery and a community art-making studio on the ground floor.

The building will also include four studio spaces for emerging nonprofits or small businesses. One of these spaces will house Reflo Sustainable Water Solutions, a nonprofit that worked with Arts @ Large to obtain free rent for one year.

Sullivan said the application process for the remaining three spaces will launch in about a month. She said she hopes to work with the three organizations to secure funding for a year of free rent for each of them.

The second floor will also feature a professional development training center, another art studio and an art library, from which residents will be able to check out fine art for their homes, free of cost.

Sullivan said she got the idea from a library in her hometown of La Crosse, Wisconsin.

“(My husband and I) used to go to the library in La Crosse, and check out art, and have it for three months in our apartments and homes,” Sullivan said. “It was so amazing. That idea came full circle to us.”

The building’s third floor will house the Arts @ Large office spaces as well as a small overnight suite for visiting guest artists. When not in use, the suite will be an instruction studio for private music or theater lessons.

“We’re just so excited in terms of what this is going to do for the organization and for the staff, because we’ve just been bursting at the seams for almost two years now,” Seipel said. “Having that opportunity to have different floors and have all these different things happening at once in the building is going to be really, really wonderful.”