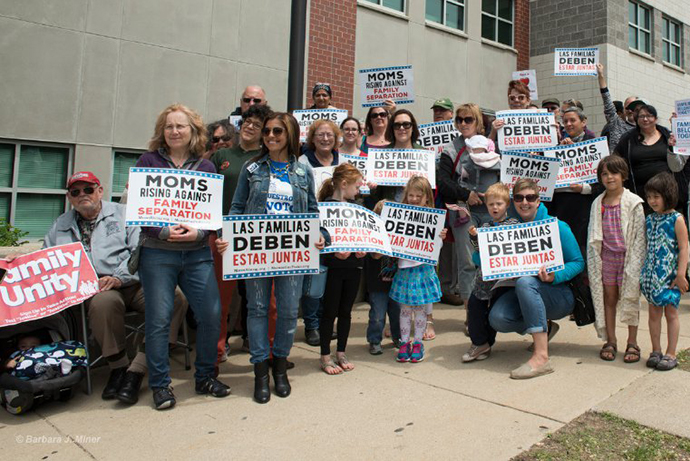 Demonstrators protest the separation of parents from their children at U.S. border (Photo by Barbara Miner)

Margaret Rozga, poet, civil rights activist and professor emerita of English at UW-Waukesha, decries the Trump administration policy of separating parents and children crossing the Mexican border into the U.S.

“Sixty-six children per day are being taken from their families.” The numbers stunned me. I thought I must have misheard, so I double-checked with ACLU of Wisconsin youth organizer Jarrett English. He had included them in his remarks at the June 1 protest of the Trump administration policy to separate children from their parents who cross the Mexican border into the U.S. English confirmed the numbers. The Department of Homeland Security itself reports that in less than two weeks in May, 658 children were separated from their parents.

I participated in that protest at the Milwaukee Immigration and Customs Enforcement office because when Attorney General Jeff Sessions announced this policy, I felt anew the panic and cold sweat I felt years ago when I would lose sight of one of my young children even briefly. To deliberately inflict such trauma on even one parent and one child is horrifying enough. But the fact of the numbers has heightened my sense of urgency. This policy must stop. It must be stopped. But how?

Reaffirming the truth is one way. Given the immediate opposition to this policy, the Trump administration has tried to deny that they are its initiators. The president himself has called for doing away with this “law” that he claimed was enacted on Obama’s watch.

But Jonathan Blitzer’s article in the May 30 issue of the New Yorker reports that Trump advisors had been discussing this policy as early as March 2017. The early discussions led to a rejection of the idea of separating parents and children as being too extreme, but with each recurring discussion, the idea became more palatable to those in the White House.

By April 6, 2018, the Trump White House found it palatable enough to have Sessions and Department of Homeland Security Secretary Kirstjen Nielsen announce it formally as policy. The rationale they gave was that separating families would discourage others from travelling to the United States illegally.

Nielsen attempted to normalize this cruel practice in her Senate testimony. Speaking with a legalese calm that as a parent and grandparent I found chilling, Nielsen said, “What we’ll be doing is prosecuting parents who have broken the law, just as we do every day in the United States of America. The child, under law, goes to HHS (the Department of Health and Human Services) for care and custody.” Her words attempt to place a nurturing cover, “care,” over a traumatizing reality. It’s language abuse in the service of child and family abuse.

Thomas Homan, the acting director of U.S. Immigration and Customs Enforcement, found it harder to disguise his lack of feeling. He called the family separations “sad,” but said he had a job to do. In a May 31 interview on the PBS NewsHour, he asked, “If they really are escaping fear and persecution, looking for relief in this country, why not come to a port of entry” where they could file for asylum. With his doubting tone, Homan implied that families’ experiences of persecution were not real, as if some frivolous reason could drive families with small children hundreds of miles from home to seek an uncertain future.

Speakers at the Milwaukee protest challenged another falsehood found in Homan’s rhetorical question, “Why not come to a port of entry?” In fact, families are presenting themselves at the border asking for asylum. They, too, are being arrested, charged with a crime and separated from their children.

In contrast to the false claims of the administration, we need to listen to people with relevant expertise to help us steer a compassionate course. The American Academy of Pediatrics has been at the forefront in speaking against the “sweeping cruelty” of this policy that inflicts “toxic stress” on children. AAP President Colleen Kraft notes that “highly stressful experiences, like family separation, can cause irreparable harm, disrupting a child’s brain architecture and affecting his or her short- and long-term health.”

I am grateful to the Jarrett English and all who organized this protest so that concerned citizens could express publicly our dismay. I am also grateful to the ACLU for filing suit to stop implementation of this policy. In the words of Joanne Lange, one of the Milwaukee protestors, “We have to keep screaming and suing until they listen.”