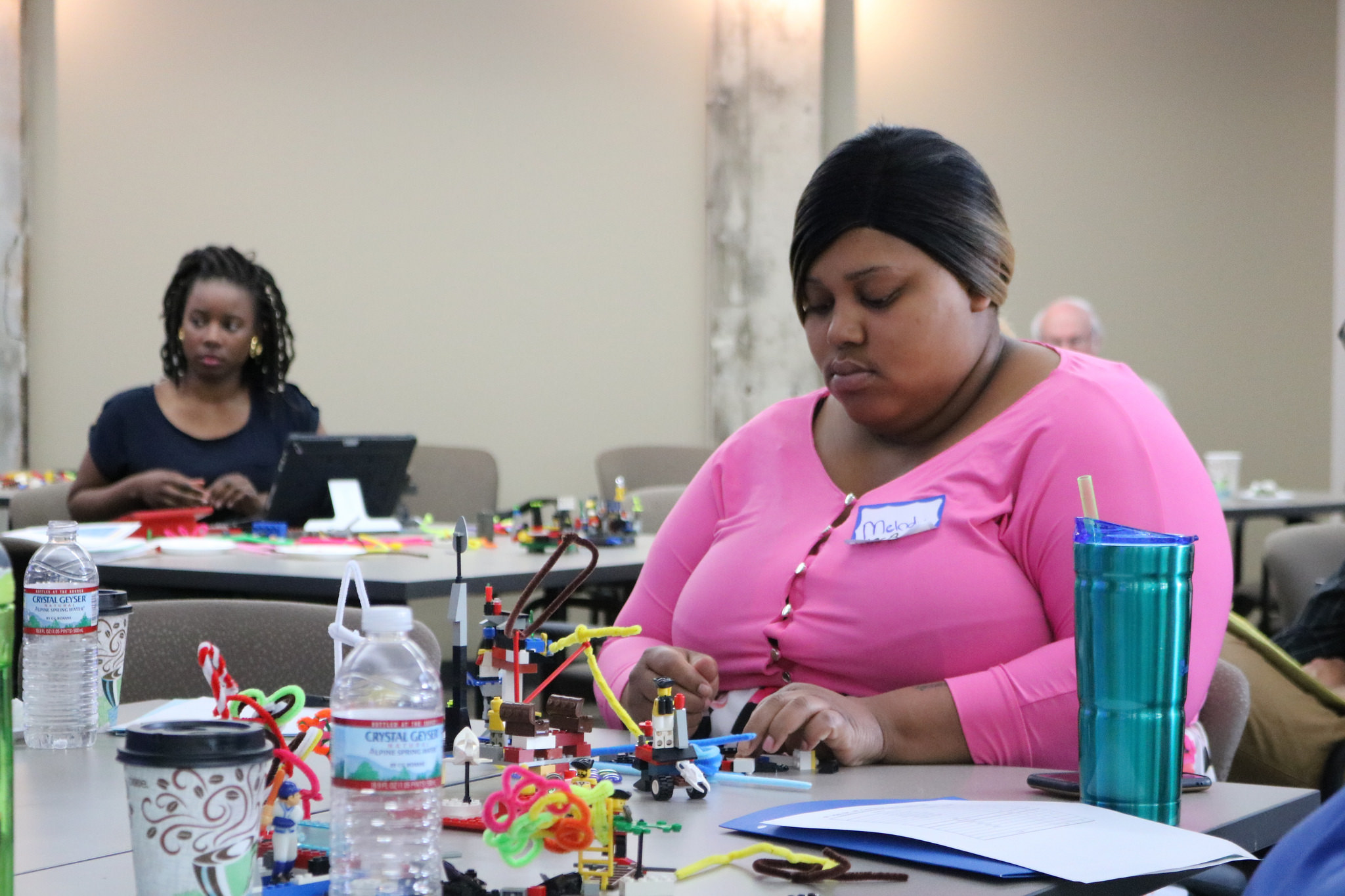 Melody McCurtis, a community organizer at Metcalfe Park Community Bridges, assembles Legos, which were scattered on each table at Data Day. (Photo by Sophie Bolich)

Neighborhood leaders are working to improve their communities through shared gardens, youth centers and building renovations. However, these projects are impossible without funding, and data is crucial to demonstrate that they are worthwhile, according to Danell Cross, a panelist at the recent 2018 Data Day conference.

“I just applied for a grant and didn’t get it,” said Cross, executive director of Metcalfe Park Community Bridges. Although she surveyed residents about dangerous neighborhood traffic, she didn’t include the results in the proposal. She wishes she had.

“They [funders] need measurements and metrics, so now I’m learning to include the data of where we start and where we want to go,” she said. “Then we can collect that data again to show how we’ve accomplished our goals.”

Data You Can Use, a Milwaukee-based professional data group focused on improving communities, sponsored the event, designed to connect people who have data with people who can use it.

Data Day attracted data devotees from across the city to meet, learn and share information about criminal justice, public health and community development. The day featured keynote speaker Dr. Magda Peck, founding dean of the Joseph J. Zilber School of Public Health at the University of Wisconsin-Milwaukee and now a consultant, as well as breakout sessions.

Cross said that data bolstered her organization’s case for improved safety in high-traffic areas. She noted that in the past, the Milwaukee Police Department didn’t take the neighborhood’s requests seriously because community members couldn’t provide concrete evidence for the need.

“I feel like we still need to justify the fact that we are the experts in the room,” she said. “For us to be able to show the data that supports that, even to the police department, and for them to get on board with helping us control this issue with traffic, was really empowering.” 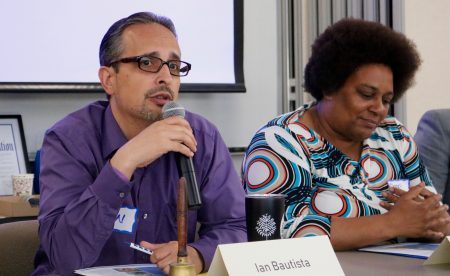 Cross also explained how “bright spots” help facilitate informed and focused decisions for community improvement. While a lot of data work tends to highlight the negatives of a neighborhood, bright spots are data results that reveal the positive aspects.

Amy Schlotthauer, who is part of a population health team at Children’s Hospital of Wisconsin, emphasized the importance of data for community engagement.

“One of the recurring themes is the importance of the community voice, listening to the community and working together to solve problems that would make Milwaukee a more attractive place to live,” she said.

She also talked about bright spots as a welcome exception to the way data is usually seen.

“Data is often used as a weapon and we always hear about the bad things,” said Schlotthauer. She added that discussions such as those at Data Day are “really hopeful and uplifting to illustrate that not all is lost.”

Panelist Britney Roberson, the Amani Byrne coordinator at the Dominican Center, said that data helped the neighborhood with the Light up Amani initiative, which placed security cameras in high-risk areas to monitor crime at night. Roberson found a correlation between areas of high crime and areas where car accidents occurred. Pinpointing those specific areas helped to determine where to place cameras.

Roberson also worked on the crime-fighting grant awarded to Washington Park in 2013, and now collects data on domestic violence, shootings and traffic accidents. This information helps identify the need for policy changes or crime-fighting initiatives such as Light up Amani to make the neighborhood safer.

She said her goal is to engage more people in gathering data so that the results are as accurate as possible.

Jonatan Zuniga, community outreach manager at Layton Boulevard West Neighbors, said circulating an annual year-end survey is helpful to gauge opinions about the community. He noted that people are more willing to invest money, time and skills into a neighborhood if they believe it will improve in the future.

“We can see where people have a negative perception of the area where they live,” he said. “Then we can talk to them and see what initiatives we need to do this year to help.”

One initiative that resulted from the survey was a program to provide home improvement grants for people who want to improve their properties but don’t have sufficient funds. Homeowners can also apply for $1,000 grants for exterior repairs that are visible from the sidewalk.

Zuniga added that he wants to make data accessible to everyone, a sentiment the other panelists shared.

Panelist Ian Bautista, executive director of the Clarke Square Neighborhood Initiative, said that he hopes to bridge the gap between data collectors and citizens in the future.

“It would be cool to have a summary of key data points such as crime, public safety, housing and economic development data on our website so that people in the community can see it at any given time,” he said. “The philosophy that we operate under is that we’re basically trying to put ourselves out of business. The more neighborhoods can do for themselves, the less they need us.”

Added Cross, “What data has really done for us, for my community, is to help us understand that we are smarter than most and that we know what’s really happening in our neighborhood.”

Editor’s note: This story has been updated to correct the keynote speaker at Data Day. It was Magda Peck, not Veronica Gunn. We regret the error.