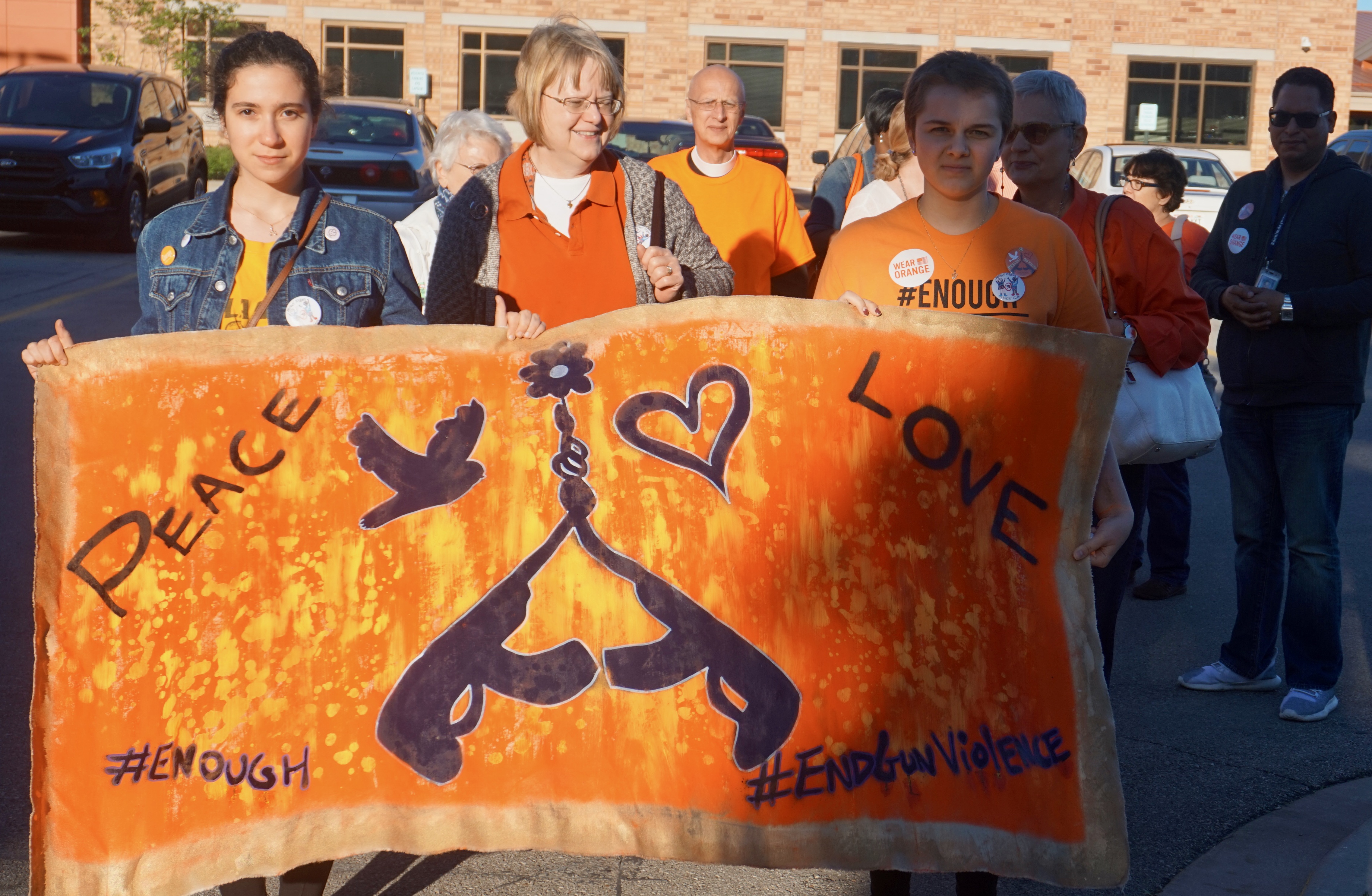 In most recent cases of gun violence “the [perpetrators] have had some history of domestic violence,” stated Carmen Pitre, president and CEO of the Sojourner Family Peace Center.

According to Brooke Shawver-Levin, a gun violence survivor and a coordinator at Moms Demand Action for Gun Sense, 54 percent of mass shootings are done by people who have committed or been convicted of acts of domestic violence. Shawver-Levin added that women are 16 times more likely to be shot and killed in the U.S. than in any other developed country.

“If I have an abuser who really wants to hurt me, it is a million times easier to do that with a gun in their hands,” Pitre added.

The vigil, held at Sojourner, was co-sponsored by the Milwaukee Office of Violence Prevention (OVP), Moms Demand Action, and the Wisconsin Anti-Violence Effort (WAVE). The event included a panel of presenters, song selections, a reading of recent gun victims’ names and a walk. It was one of three OVP events marking National Gun Violence Awareness Day and the Wear Orange campaign. 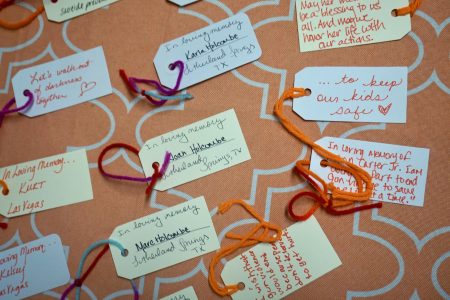 Names of gun violence victims are written on tags by vigil attendees. (Photo by Ryeshia Farmer)

“We talk about statistics a lot, but we don’t want to lose sight of the fact that those numbers are people who had lives, friends and families who miss them,” said Anneliese Dickman, WAVE’s director of communications.

Judy Durbak attended the vigil because she is upset about gun violence. “I started [volunteering] after Vegas, because I said, ‘We can do something!’ I got started, because I am angry.” Fifty-eight people were killed when a gunman opened fire at a music festival in Las Vegas on Oct. 1.

After performing Smokie Norful’s “I Need You Now,” one of the vocalists, Nahkeera Jackson, could be seen weeping in Sojourner’s hallway. Jackson’s colleague at the Northside YMCA, Rayven Peterson, said “It was very emotional [for Jackson] to hear all of those names of people who had been affected by gun violence since January.”

Pitre said, “We have a misconception about who is struggling with violence, based on what we see … We have to do a good job of showing what all of the examples of violence look like in our community.”

David Muhammad, violence prevention manager at OVP, commented that the Gun Violence Awareness Day events have led to an increase in public dialogue about what prevention looks like and how to measure it.

According to the Centers for Disease Control, an average of more than 35,000 people in the U.S. are killed annually by a gun. “Once we eliminate violence in the [life] of that most marginalized person, we make things better for ourselves,” Pitre commented.

“Violence is a learned behavior. We want to prevent children from seeing and learning these behaviors,” Pitre stated.

According to Muhammad, “The larger policy issue around gun violence in the United States has been focused on mass shootings, school shootings, but we know that most violence is committed by way of handguns, sometimes self-inflicted or by people who know the target, so we want to encourage a culture of peace as a lifestyle.”

Dickman said that much of WAVE’s work is to “activate their subscribers” to lobby their legislators, because “we believe that stronger gun laws will help prevent gun homicides, but also gun suicides.”

He added that OVP would like to see mental health counselors on school staffs to help students cope with violence.

“This isn’t as controversial an issue as the gun lobby wants us to believe it is. So don’t be scared to bring it up in mixed company, because you’ll find that most people actually agree with you,” she added.