Unrelenting rains washed over Martin Luther King Drive and dripped down soggy ponchos throughout the morning, but that did not stop people from celebrating Juneteenth Day. Despite the weather, the parade marched on, charcoal grills kept burning and a strong sense of community prevailed.

Some saw the rain as symbolic. Just as the last of the slaves in Galveston, Texas, endured until they were freed on June 19, 1865 — more than two years after the Emancipation Proclamation took effect — African-Americans today persist no matter the weather, the political climate or the hardships some face.

“I want to be a good role model and show that we can persevere through the rain,” said Kalia Gooseberry, co-winner of Miss Juneteenth Day 2018, her crown and sash slightly damp.

This year was the 47th annual celebration of Juneteenth Day in Milwaukee, but people nationwide have been celebrating it for more than a century and a half. African-Americans take pride in the occasion because it is their independence day, said Adriane Griffin, special programs director of Northcott Neighborhood House, the nonprofit that organized the festival.

“People would get upset if there was no Juneteenth Day (festival),” Griffin said. “It’s something we own for ourselves as African-Americans. It’s ours.”

Robert Smith, history professor and director of the Center for Urban Research, Teaching and Outreach at Marquette University, said he finds the holiday “remarkable” because of this sense of ownership.

“Juneteenth is a holiday very specific to the black experience,” he said. “When framing it that way, it speaks more to the agency of black people and the willingness for black people to chart the ways and the rights of citizenship on their own terms. … Juneteenth is yet another expression of a community’s will.” 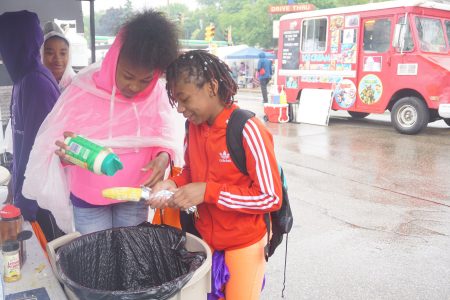 Two children celebrate Juneteenth Day by enjoying some corn on the cob. (Photo by Abby Ng)

While Juneteenth Day commemorates emancipation, the holiday also serves as a reminder and call to action.

“You have to have a bittersweet taste about the celebration,” said Gary Williams, associate professor and director of the Institute for Intercultural Research at the University of Wisconsin-Milwaukee. “You’re celebrating something (slavery) that should never have happened.”

Williams said he recommends marking Juneteenth Day by acknowledging and reflecting on the “brutal and inhumane past in this country.”

“Celebration should be designed to say ‘here’s where we were, here’s where we are, and this is where we need to be,’” Williams stated. “Do something positive. … work very hard to continue to move forward and make very certain that we don’t repeat that history.”

Smith added that when considering how people of color, including immigrants, are treated in America, the holiday holds special meaning today, similar to the significance it once held during the Jim Crow era, a time of legalized segregation.

“There is something about the oppressive nature of our current political climate that makes a conversation about Juneteenth and the celebration of Juneteenth all the more important,” he said. “Juneteenth is a statement about what citizenship should include.”

According to Smith, festivities in Milwaukee have a slightly greater “community organizing” feel than celebrations he has been to in the South.

“It’s a different world every time you turn around,” Griffin said. “Society changes so much, so we try to build around that and keep the momentum going: remembering our past, but learning from it to see what we can do in the future.”

The theme for this year’s festival, “It’s time to make a change,” was prominent during the Miss Juneteenth Day pageant and was displayed on security guard’s shirts.

Booths for community and nonprofit organizations such as Running Rebels, Safe & Sound and the Wisconsin American Civil Liberties Union offered attendees the opportunity to get involved. The festival ran along Martin Luther King Drive from Center Street to Burleigh Street.

Griffin said the theme was purposefully broad and open to many interpretations, but she wanted people to come away with a sense of hope for change. She added that she wants people to vote, knowing they have the power and the responsibility to decide who represents them.

Juneteenth Day is not officially recognized as a national day of observance. Both Williams and Smith agree that more people should know about the special date and use it as an opportunity for advocacy.

“The abolition of slavery posed one fundamental question. What does freedom mean for black people?” Smith said. “Juneteenth is still very much connected today to that question of what does equality, racial justice and citizenship mean in 2018.”

Adah Rawlings, who sold her book “Not My Biography, but My Testimony” at the festival, said Juneteenth Day reminds her that she has the power to create change.

Rain threatened to soak copies of her book, but Rawlings continued triumphantly, “I see the rain, but look around you. Everybody still came out with their food; the parade is coming in. We’re here!”