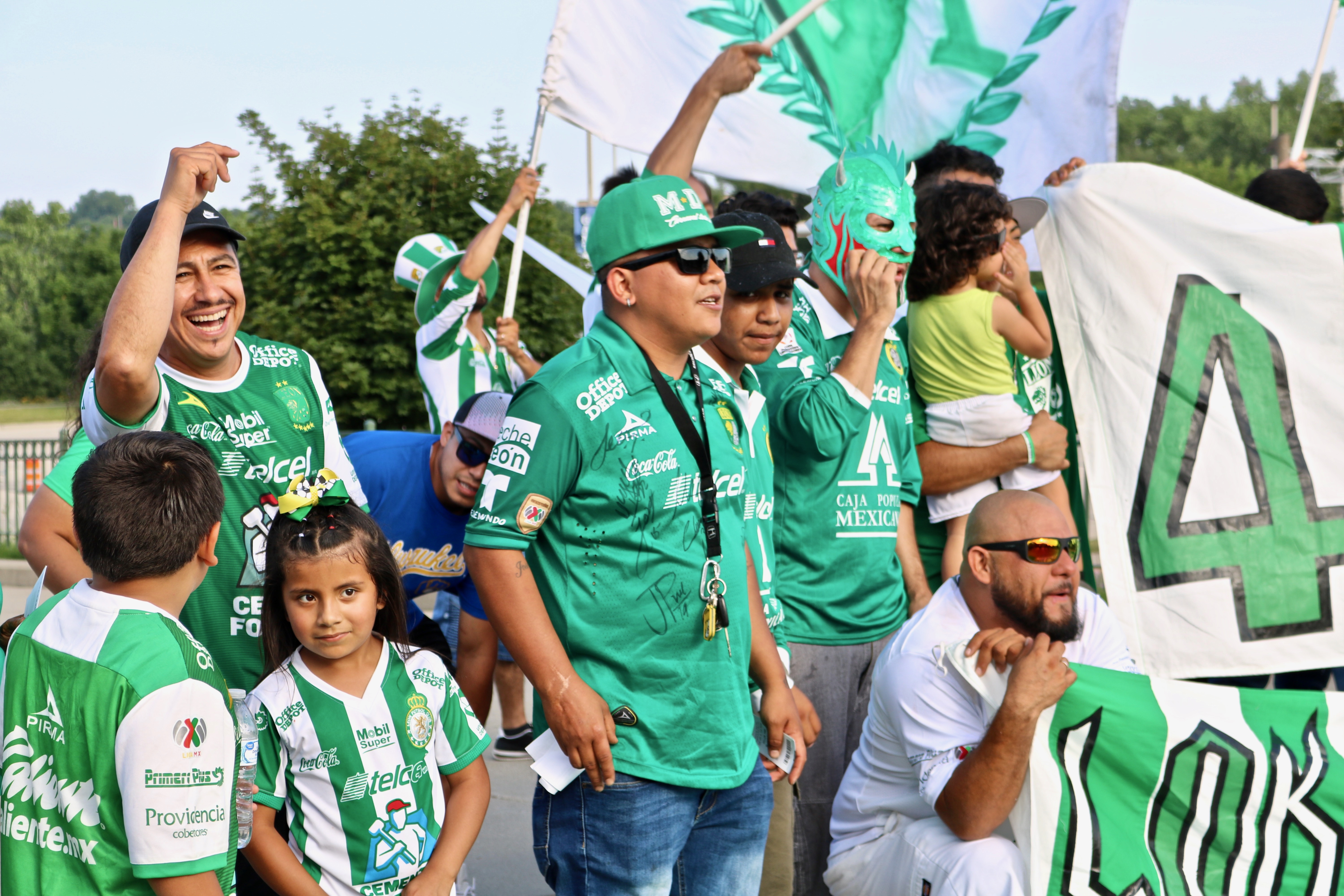 Fans from Los De Arriba Milwaukee assemble on the pedestrian bridge before marching into the stadium en masse. (Photo by Sophie Bolich)

The stream of green and white-clad fans emerging from between cars in the Miller Park lot seemed endless. Sporting masks, banners and musical instruments, the crowd just kept growing, as did the anticipation for the game between professional Mexican soccer teams Club León and C.F. Pachuca.

Even hours before kickoff, the León fans could barely contain their excitement. People waved green and white flags, played pickup soccer games in the few free parking spaces and broke into spontaneous song and dance.

“I wasn’t expecting a big crowd actually,” said Mario Ramirez, leader of the local León fan club, Los de Arriba Milwaukee. “I thought I would only need 25 tickets, mostly for my family, but look how it turned out.”

Ramirez ultimately purchased 300 tickets for friends and family, including some who traveled from Ohio and California.

“When I heard that León was coming to play in Milwaukee, I fell to my knees,” said Angel Flores, a member of Los Arriba de Milwaukee in Spanish. “I was speechless.” 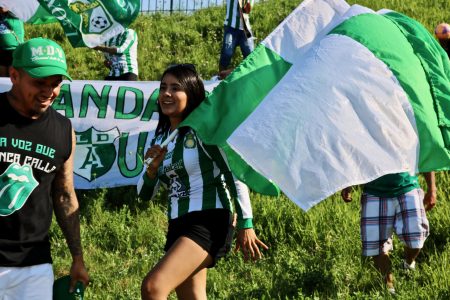 Noemi Ramirez waves a flag while her fellow León fans practice their cheers before the game. (Photo by Sophie Bolich)

León fans comprised the majority of the more than 18,000 spectators at the professional match, which was León’s last scrimmage before the team returns to Mexico for the start of its official season later this month.

“You can tell our fan base isn’t as big here,” said Pachuca fan Hugo Quiñones. “But we are the best no matter what.”

According to Ramirez, the score isn’t important so long as his team feels at home in Milwaukee.

“This could be the last time León plays in Milwaukee,” Ramirez said. “Or it could be the start of something beautiful. We’ll see.”

Ramirez and his family moved from León to the U.S. when he was 2 years old, and he says soccer connects him to Mexico.

“We value our people and miss our country, so these games are like a little piece of home,” he said.

Ramirez and his family often travel to Mexico to support León soccer.

“We always travel to home games and we’re becoming part of the fan club there as well,” said Ramirez’s sister, Lolis Ramirez. She said the fan club in Mexico is on another level, but she and her family try to bring back new ideas to improve Los Arriba de Milwaukee.

Ramirez said some of his friends who are undocumented aren’t able to see León play in their home stadium, but soccer provides them a reprieve from the fear and homesickness they face every day.

“It’s all worth it to forget about the political stuff and to just have fun,” he said.  “We’re just regular humans working and trying to enjoy life.”

Ramirez wants to keep improving his fan club and advocating for soccer in Milwaukee.

“I want other people to join me and bring this atmosphere to another level,” he said. “You don’t have to be a León fan; just show up to support soccer.”

When León leaves town, Ramirez says he goes back to being a Milwaukee sports fan just like anybody else.

“León is here now and it’s their day,” he said. “But when they leave I am all about supporting the Brewers and the Bucks. Milwaukee is my home and I love it.”