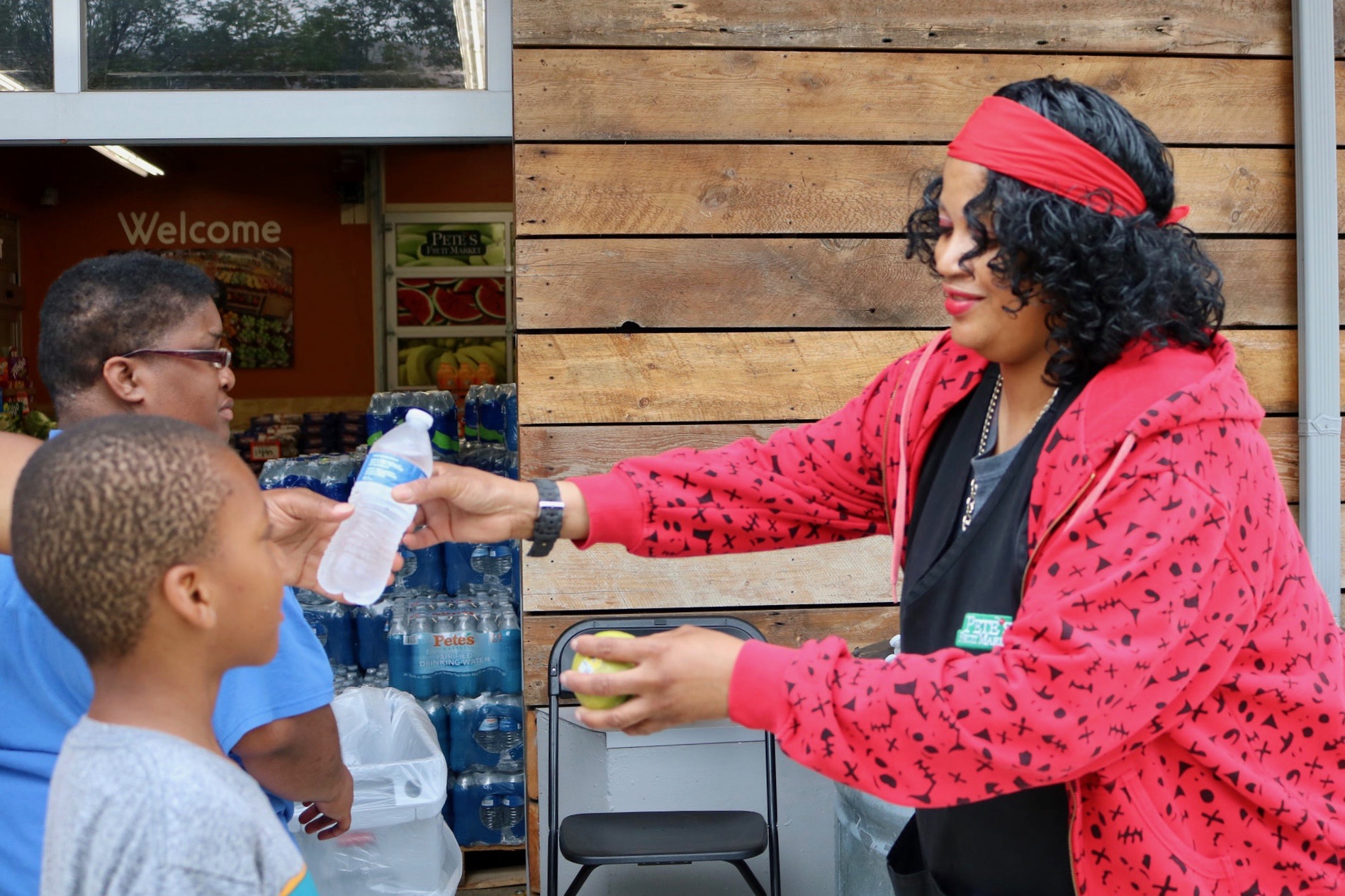 Cynthia Preston, an employee at Pete’s Fruit Market, distributes free water and apples at the fair. (Photo by Sophie Bolich)

“Brussels sprouts,” called out Breen Causey, rifling through a folder and handing over a recipe for roasted brussels sprouts with apples to an attendee at the Pete’s Fruit Market health fair on Saturday.

Causey, a social worker at Froedtert & the Medical College of Wisconsin, oversaw a spinning pie chart decked out with pictures of vegetables such as potatoes, broccoli and carrots.

Community members spun the contraption “Wheel of Fortune” style, gleefully calling out the winning veggie each time the wheel ticked to a halt, then receiving a healthy recipe featuring the vegetable.

The miniature game show was part of a health fair at Pete’s Fruit Market, 2323 N. Dr. Martin Luther King Drive, the latest event in an effort to promote healthy living in the North Side community.

“You have to want to get healthy,” said John Walker, who asked vendors about back-to-school immunizations for his third-grade son, Jaylin. He said Jaylin loves vegetables, and they eat lots of cucumbers, lettuce and tomatoes in their house. 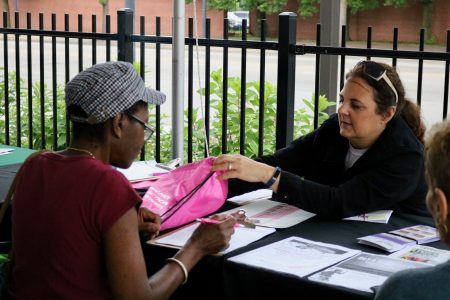 Clara Dimoh fills out a form at the Susan G. Komen for the Cure table, which offered resources for breast cancer prevention. (Photo by Sophie Bolich)

“We’re really encouraging people to get their yearly checkups and make sure they’re taking all the preventative measures,” said Higgins, who also noted that “cancer is rampant in the community, and we want to raise awareness so that we can catch it early or even prevent it.”

According to Higgins, Pete’s Fruit Market was the ideal location because it has already made a difference in how the community shops and eats.

“Pete’s provides healthy food within walking distance,” she said. “Buying and cooking fruits and vegetables is easier now and that’s the first step towards healthy living.”

To encourage cancer prevention, Susan G. Komen for the Cure had a table at the event with information about the importance of self-breast examinations and annual mammograms. The Medical College of Wisconsin Cancer Center had a similar table concerning prostate cancer.

“I do my mammogram every year, but I know some people don’t,” said Clara Dimoh. “I try to lead by example and try to get other people to take care of themselves as well.”

Anne Marie Tsitiridis, who owns Pete’s with her husband, Theodore, said she wants the community to learn how food can be used for disease prevention and management.

In addition to exercise and a healthy diet, a key part of community health is access to quality care. Tiffany Pitts, an outreach care specialist for Anthem Blue Cross Insurance, handed out brochures on diseases that affect the community most.

“A lot of people have been coming up and asking about diabetes and blood pressure,” she said. Pitts also distributed resource cards with contacts for assistance getting health care.

Pitts pointed out that a simple change people can make is to drink more water. “There are so many corner stores selling bottles of juice or soda at cheaper prices than water, so people just reach for the juices that are full of sugar.”

Pitts’ table was located next to the store’s entrance, where Pete’s employee Cynthia Preston handed out free bottles of water and apples to attendees.

The overcast weather and similar events in other neighborhoods resulted in a small turnout for the health fair, according to Higgins, but community member Freddie Johnson said he thinks the event was beneficial.

“It’s nice for the community to get educated on health,” he said. “It’s good to see new things and learn about getting screened to stay healthy.”