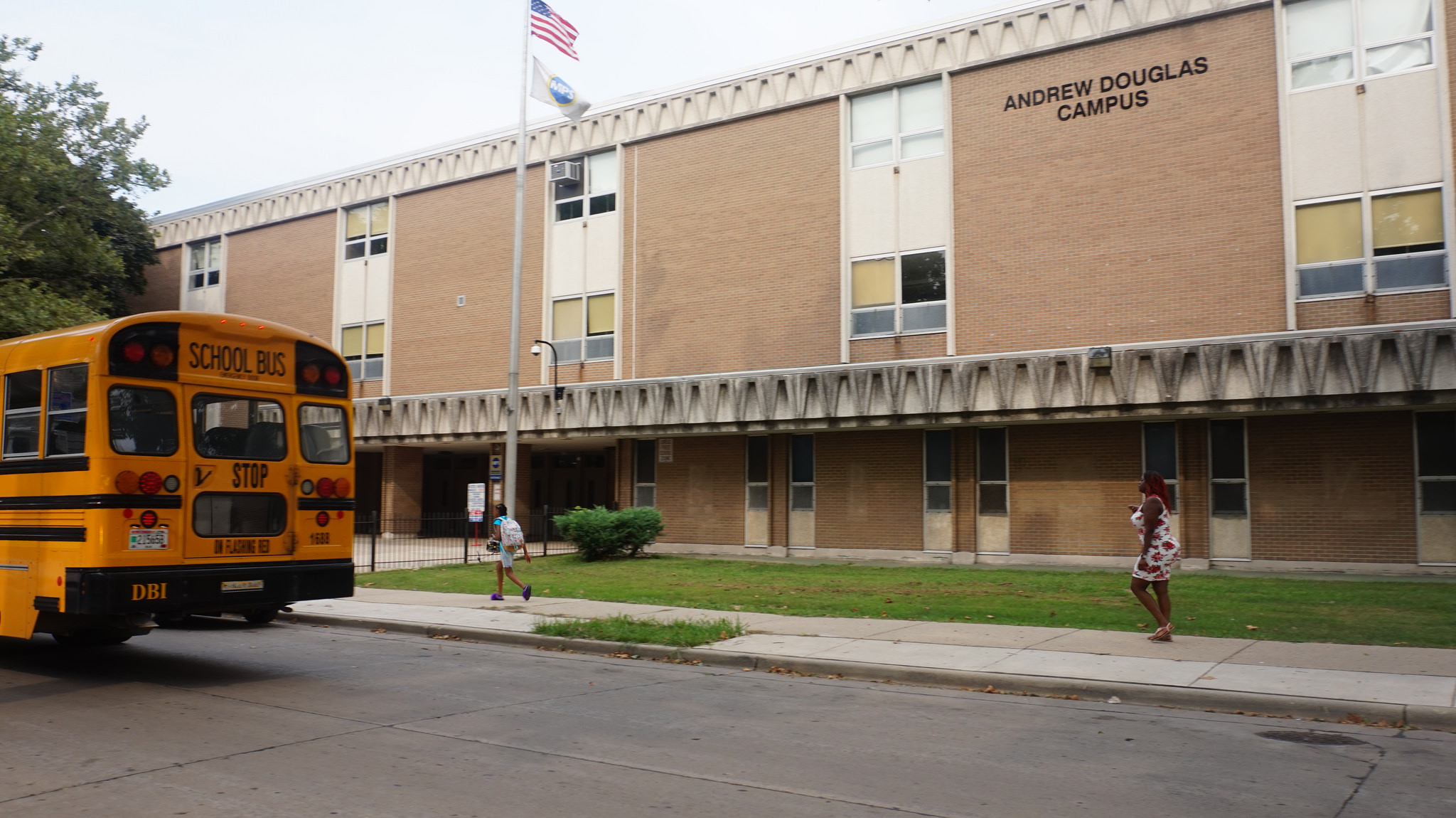 Early-start students pass the temporarily closed Andrew Douglas Campus on their way home from their second day of classes. (Photo by Ryeshia Farmer)

On a recent week day, children could be seen swinging, playing tag and shooting hoops in the space where Keefe Avenue School’s backyard playground and Andrew S. Douglas School’s basketball court meet, unaware of the changes coming to the schools in just a few weeks.

As part of the Milwaukee Public School board’s new 53206 Initiative, Douglas and Keefe schools will co-locate at Keefe, 1618 W. Keefe Ave., during the upcoming school year. The two will remain separate entities. Douglas’ facility at 3620 N. 18th St. will be renovated into a middle school.

Annie Woodward, MPS District 4’s board director, said that since the renovations need to be made during the school year, “I see this as an emergency situation and as temporary.”

Charles Phillips, the parent of a Keefe student, said locating the two schools in the same building is a great idea, because “it’s time for us to come together as a community.” He said that the plan is a nice complement to “Family and Schools Together,” a weekly parent engagement program designed to foster bonds among students’ families.

Phillips learned of plans to co-locate Douglas and Keefe Thursday afternoon during a phone call with Christlyn Frederick-Stanley, principal at Keefe. The school board approved the plan at its July 26 meeting.

Phillips said Frederick-Stanley told him that she plans to mail letters to parents.

According to Zerda Palmer, principal at Douglas, two meetings were held at the school last week to inform parents of the plans for co-location. However, only six parents attended those meetings. Palmer said she will mail letters to parents and plans to share more information at the school’s orientation on Aug. 24. 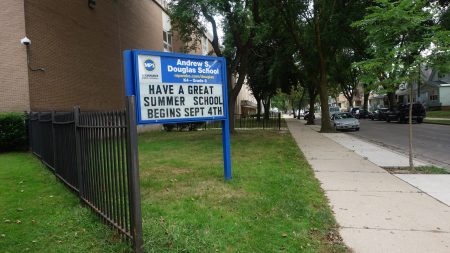 Andrew S. Douglas Middle School will open at the start of the 2019-20 school year. (Photo by Ryeshia Farmer)

According to Lonnie Steel, a fourth-grade teacher at Douglas, students from the different schools will not interact much, except during lunch. He said he was told that the two schools would maintain separate principals, secretaries, classrooms and bus lines.

“We will allow [Douglas students] to have a certain group of classrooms near each other, so that they can feel like they have their own space,” said Frederick-Stanley. Students from both schools will share the cafeteria and gymnasium.

Frederick-Stanley added that students will also interact during recess. “If the students decide to come together to play kickball, then we are not going to discourage that,” she said.

Administrators at Keefe and Douglas plan to foster positive interactions just as they would at the beginning of any school year, but on a larger scale.

Palmer said that planning for the Douglas renovations has not begun yet.

The Douglas building housed the Business and Economics Academy of Milwaukee (BEAM), a K-8 charter school, for about 10 years until June 2017. Woodward said BEAM offered programs in home economics and fashion design, so kitchens, large refrigerators, stoves, and other, related equipment will have to be removed from the school.

Keefe has the capacity to hold more than 800 students. Douglas expects 238 students at the start of the 2018-19 school year, and Keefe will have about 250 students.

“I expect it to be just like other immersion schools, with an emphasis on the French language, since most Africans speak French,” Woodward said. No schools in 53206 reflect African-American culture in the way that German, French or Spanish Immersion schools focus on these cultures.

Woodward said teaching African-American students about their own culture will boost their self-esteem, which will result in better academic achievement.

Woodward noted that staff members need to be compassionate and able to understand students’ traumas, impoverished conditions and exposure to violence. She added that church leaders, alumni and other community members should be given important roles at the schools as well.

Palmer said that the few parents she spoke to at last week’s meeting were “a little apprehensive, because they are not sure what the school year will look like.” She noted that no parents have withdrawn their children from Douglas after hearing about the move to Keefe.

Editor’s note: This article has been updated to correct the spelling of Zerda Palmer’s name. We apologize for the error.