You are here: Home / Posts from Community / Milwaukee Pride launches campaign for rainbow crosswalks
Share this... 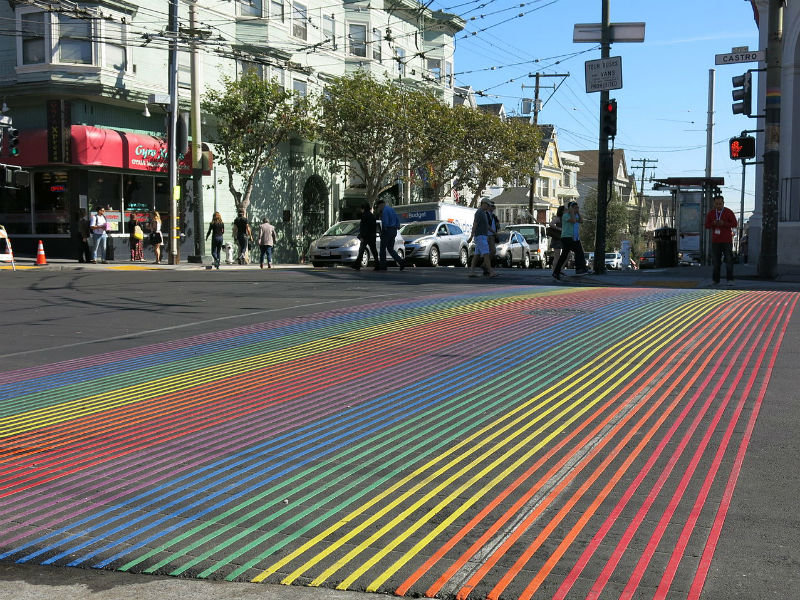 Milwaukee Pride, in partnership with local LGBTQ and neighborhood organizations, has advanced a proposal to Milwaukee Mayor Tom Barrett’s office requesting the installation of rainbow crosswalks in Cathedral Square.

“We ask the City of Milwaukee to honor its incredible LGBTQ legacy with a decorative rainbow crosswalk at the intersection of Jefferson and Wells,” reads the proposal. “This crosswalk, as the first Milwaukee monument to LGBTQ people, will be not just a symbol of local pride, but a testament to historic local triumph.”

Alderman Bob Bauman of the 4th District has also offered written support for the concept.

Since 2010, more than 30 cities worldwide have implemented rainbow crosswalks to commemorate their local LGBTQ heritage.  In 2016, George Schneider of This Is It submitted a similar request to the Milwaukee Department of Public Works. Without formal review, the department rejected his request, citing cost, design and accessibility concerns, and stated that the project lacked historical or cultural significance.

Milwaukee Pride does not agree with this assessment.

“Milwaukee Pride has its historic roots in Cathedral Square,” said Michail Takach, vice president of communications. “On June 17, 1989, 500 people marched from Walker’s Point to Cathedral Square, where another 500 had gathered for a rally. The first Milwaukee Pride March earned regional media attention as well as the first-ever endorsement from a Milwaukee mayor and county executive.”

“Thirty years later, PrideFest Milwaukee is now the state’s largest annual gathering of LGBTQ people. But we wouldn’t be here today, if not for that pivotal moment in Cathedral Square.”

Per the proposal, the rainbow crosswalks would be dedicated to the memory of June Brehm. In 1968, June Brehm opened This Is It at 419 E. Wells Streetto create a safe, welcoming and inclusive space for her gay friends that was as good, if not better, than any other bar in town. Fifty years later, This Is It celebrates the historic claim of being the oldest LGBTQ bar in Milwaukee and Wisconsin, as well as one of the top 10 longest continuously operating in the United States.  Although many LGBTQ businesses once operated near Cathedral Square, This is It is the one and only pre-Stonewall survivor.

“With the Milwaukee Streetcar coming to East Town, a rainbow crosswalk would be a wonderful visual for visitors to see and know they are welcome here,” said Schneider. “It would carry lasting meaning as a continuous, year-round celebration of our LGBTQ citizens. It would spark conversation about the history of the neighborhood and what it means to LGBTQ people.”

“Crosswalks would say we are all-inclusive and supportive of all our citizens. So, let’s do it. It’s high time.”