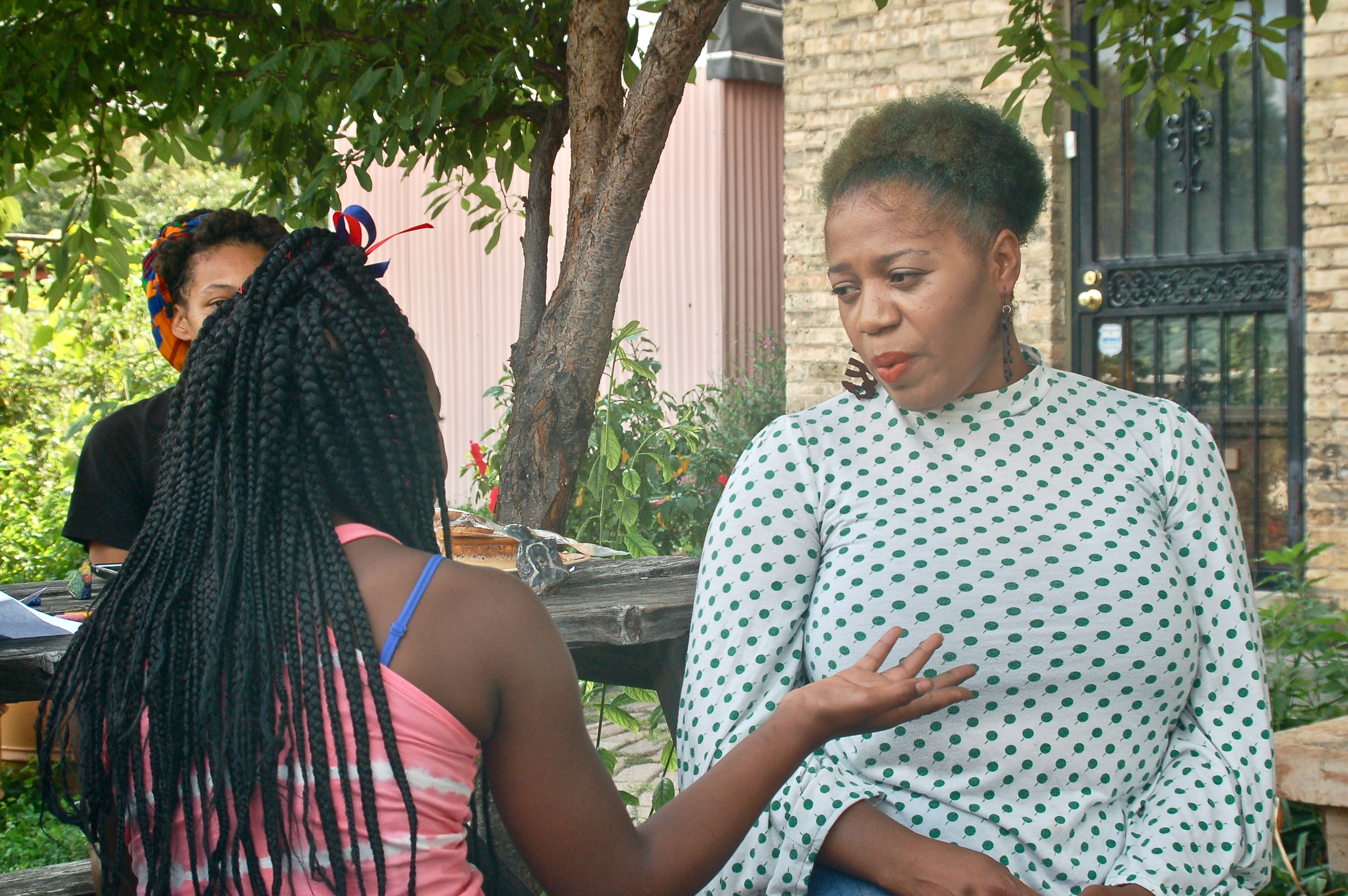 Linetta Davis, right, listens as her 10-year-old daughter Zora shares her thoughts on a conflict she had with a friend. (Photo by Andrea Waxman)

A small group of city residents gathered around picnic tables in a garden on West Lisbon Avenue on a recent afternoon to talk about gender. About 10 participants read and responded to poems and discussed a wide-range of related issues — how they were taught to express emotions — or not; strong black women who are oppressed; and how some advice young people receive from parents is no longer relevant.

Participant Martina Patterson, an artist, said that one of her students once told her, “The advice my mother has to give me is from another time. It used to be that bullying was in your face. Now it’s on Facebook.”

The Lisbon Avenue gathering was the last in a series of experimental social conversations called Soapbox Milwaukee that took place in city neighborhoods in August. Among the project’s goals was to help individuals develop their voices, build the capacity of city residents to communicate about issues important to them and include community artists in the conversation.

Soapbox was created by poet and Still Waters Collective founder Dasha Kelly Hamilton. She launched “Soap Box Therapy” in August 2016 to give city youth an opportunity to voice their responses to the killing of Sylville Smith by an MPD officer and its aftermath. Then, the youth erected a literal soapbox and performed original spoken word poems in a small park near the shooting site. It gave the young people an outlet for their emotions and a chance to be heard.

The project comprised three phases. First, organizers held pop-up survey events in 12 neighborhoods and public spaces such as the Black Arts MKE Festival and “The Calling” sculpture park outside the Milwaukee Art Museum. They set up a couch, armchair and coffee table and had a musician play bass. People were invited to share their perspectives, ideas and opinions on four topics: generations, incarceration, privilege and gender. 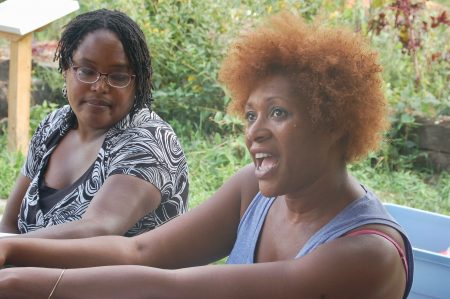 The topics, chosen by Kelly Hamilton, were based on research on what topics resonated with participants, said Angela Allen, associate professor and communities educator at UW-Extension.

“We learned a lot from every event and (the responses) reminded us of things we already knew. We were excited at every event because we heard something new,” Allen said.

In the second phase, the responses collected were displayed at an event in Sherman Park. Some of the statements were turned into art or performance and everyone was invited to “get up on the box and get it off your chest.”

At the last conversation, about gender, participants spoke of family attitudes about “masculine” and “feminine” behaviors, how a lack of language to describe feelings can result in negative behaviors, and painful experiences of childhood sexual abuse. Two participants shared poems, one by a noted poet and an original work, and group members discussed lines that resonated with their own life experience.

In one exchange about communication difficulties, Kelly Hamilton said, “Sometimes I’m responding to what I felt you said, not what you actually said.”

Metcalfe Park resident Destinny Fletcher, 25, attended four of the five Soapbox events. A Children’s Hospital of Wisconsin community health navigator working in the Amani and Franklin Heights neighborhoods, Fletcher said she had never participated in anything like Soapbox before. She saw the gatherings promoted on social media and also received a personal invitation, she said.

“They were definitely good conversations” around themes of privilege, incarceration and gender — “subjects we tend (not to discuss) as much as we should in our city.” She said she went because she wanted to hear other perspectives on community issues beyond just those of the people she knows.

Fletcher found the discussion about privilege particularly interesting, she said.

“We were talking about the many different privileges that we take for granted” and how things that are often not seen as privileges — like being tall — give a person privilege from the point of view of people who are not tall.

The group talked about being “grateful for what you have but also (being) mindful of your words and your actions,” according to Fletcher. The discussion got more intense between black and white participants when the subject was racial privilege, she said. She noted that there were also Latino and Native American participants among the diverse group and racial privilege pertaining to those races seemed to be less well understood.

Fletcher said she looks forward to participating in Soapbox again when it resumes in the spring.