You are here: Home / Home / Carousel / Walnut Way launches ‘Lead From Where You Live’ initiative
Share this...

Walnut Way Conservation Corp. has launched a new initiative, “Lead From Where You Live,” intended to encourage grassroots leadership. One brunch meeting has been held to introduce the initiative and more are upcoming.

In July, canvassers visited more than 1,000 homes in Lindsay Heights to discuss the initiative and invite people to the brunches.

Lead From Where You Live was created to “uplift natural leadership” of community members, according to Antonio Butts, executive director of Walnut Way.

The initiative includes an effort to institute neighborhood block captains. They will receive training on how to organize their blocks by hosting block parties and participating in focus groups.

Block captains also will be responsible for addressing littering, holding community meetings, aiding homeownership efforts, informing residents of activities and communicating with each other.

According to Butts, more than 15 people have signed up for the role.

Butts said that Lead From Where You Live discussions will emphasize that everybody can lead. “What [residents] do at any level in the neighborhood, even picking up a piece of paper, impacts the quality of life in Lindsay Heights.”

Lead From Where You Live was inspired by economic development in downtown Milwaukee, according to Butts. Recent developments include the new Milwaukee Bucks stadium, named the Fiserv Forum, and The Hop, the new streetcar.

Butts said people are wondering what the implications of the downtown developments are for their lives and families, and what information they need to influence the process. 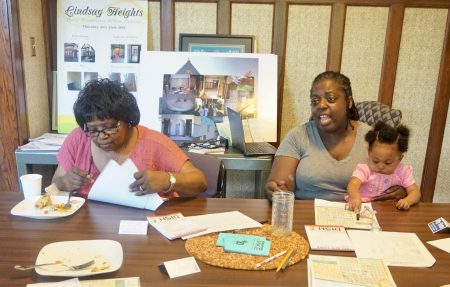 Resident Joe Dupar, who attended the first meeting, said he is concerned about gentrification in the neighborhood.  Dupar asked how Walnut Way’s initiatives would foster a more authentic sense of community in Lindsay Heights.

According to Butts, Walnut Way plans to implement ideas that residents suggest during the brunches. He said the organization would issue a report about their concerns and interests, as well as what Walnut Way will do to address them. Butts also promised to honor requests to contact the city about street repairs and property damage caused by rodent contamination.

At the meeting, residents identified Lindsay Heights businesses that reflect the type of economic development that they support. These include The Tandem, a restaurant at 1848 W. Fond Du Lac Ave., The Juice Kitchen, a juicery at 1617 W. North Ave. and coffee houses Coffee Makes You Black, 2803 N. Teutonia Ave. and Sweet Black Coffee, 2035 W. Fond Du Lac Ave. The Juice Kitchen is located in the Innovations and Wellness Commons, which also includes Fondy Food Center offices and a commercial kitchen run by the Milwaukee Center For Independence.

“With the tremendous amount of development coming into the community, residents are looking to create opportunities for … their individual households,” said Butts.

Area resident Maria Beltran said she attended the brunch to encourage neighborhood leaders to keep people informed. She questioned how the Lead From Where You Live initiative would operate, who would be allowed to participate and how block captains would be assigned throughout the neighborhood.

Butts said these questions would be answered at the second brunch, which has not yet been scheduled.

Beltran said that the neighborhood has changed over the years, noting that once Lindsay Heights was a place where everyone felt safe, children played outdoors and if one person barbecued everyone in the neighborhood was invited to eat. Now neighbors no longer want to participate in neighborhood activities because of crime.

Beltran added that it is time that residents “get the community back.”

“We just want to create a space where everybody can be as honest as possible, and we can hear your voice,” said Butts, adding “It’s very important that [residents] change the perception of Lindsay Heights and its neighboring communities and [that we] take control of the narrative in doing so.”

The brunches are funded by a $60,000 community capacity grant from Local Initiatives Support Corporation (LISC), an organization that supports community development. Walnut Way is seeking additional funding to execute the block captain initiative.

According to Butts, monthly brunches to discuss the block captain role will resume later soon and will involve residents in commercial development planning.

As a result of Lead From Where You Live, Dupar hopes to see “support and togetherness for Lindsay Heights as a whole.”

The brunches and the block captain initiative will “create a pathway that will allow residents to be involved in economic development and get in front of the trends that suggest that the neighborhood will change,” Butts said.