Local vendors and artists participated in the Silver City InterNational Festival on Milwaukee’s South Side. (Photo by Sarah Lipo)

Angelica Escamilla was an enthusiastic participant in the Silver City InterNational Festival held on the South Side last weekend.

Escamilla runs a dance studio bearing her name, which teaches individuals about their Mexican background and traditions. She said it is important for Latinos in the neighborhood to understand where they are from.

“There’s a lot of people in the community that are of Latino background,” she said, “and unfortunately, (they) have no idea what their culture really is. So through what we do and the teachings we offer the kids, we hope we can instruct and offer a little enlightenment to those people.”

Escamilla said that the festival exposes young people to her organization.

“Because of these performances that we do at this Silver City festival, we actually get kids from the communities and then they come knocking on our door for classes,” she said.

This was the seventh year of the festival, which celebrates the cultural and ethnic diversity of the Silver City neighborhood and Milwaukee through food, the arts and music. The sponsoring organization, Layton Boulevard West Neighbors (LBWN), works to stabilize and revitalize the Silver City, Burnham Park and Layton Park neighborhoods. 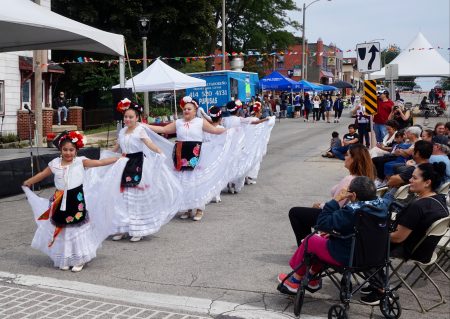 Lidia Villazaez, LBWN community outreach manager for Silver City, organized the event and said the festival has come to include all cultures within Milwaukee, especially Latino and Asian traditional food, dance and art.

The festival was held on West National Avenue between South 33rd Street and South 35th Street.

The Layton Boulevard West area includes the Hank Aaron State Trail, the Urban Ecology Center, Three Bridges Park, Miller Park and the Mitchell Park Domes. It is one of Milwaukee’s most diverse neighborhoods, with historic architecture and numerous stores and restaurants.

Villazaez said that the festival has gone through various name changes. It was called the International Food and Art Walk until 2016.

“In general, (the festival) started to try and encompass some of the diversity in the area. As the time went on, we noticed how diverse the community was getting,” Villazaez said.

There were three stages at the festival: the Silver City Premier Stage, the Portal Stage and a stage at Mamie’s Restaurant, 3300 W. National Ave.

Twelve food vendors and many artists sold their works as well. Villazaez said organizers contacted artists from Silver City and throughout Milwaukee.  Some artists helped to organize the festival.

“We do try and focus it on the neighborhood businesses, but since it’s grown throughout the years we are also trying to (include) the diversity of the entire city,” Villazaez said. The festival “is a place where you can come in and … witness a little bit of everything.”

Jose Aduirre, who grew up in Silver City and has lived in the area for the last 20 years, said this was the second time he attended the festival, and he appreciates how many cultures are represented. “You can enjoy different cultures and try different foods you have never tried before,” he said.