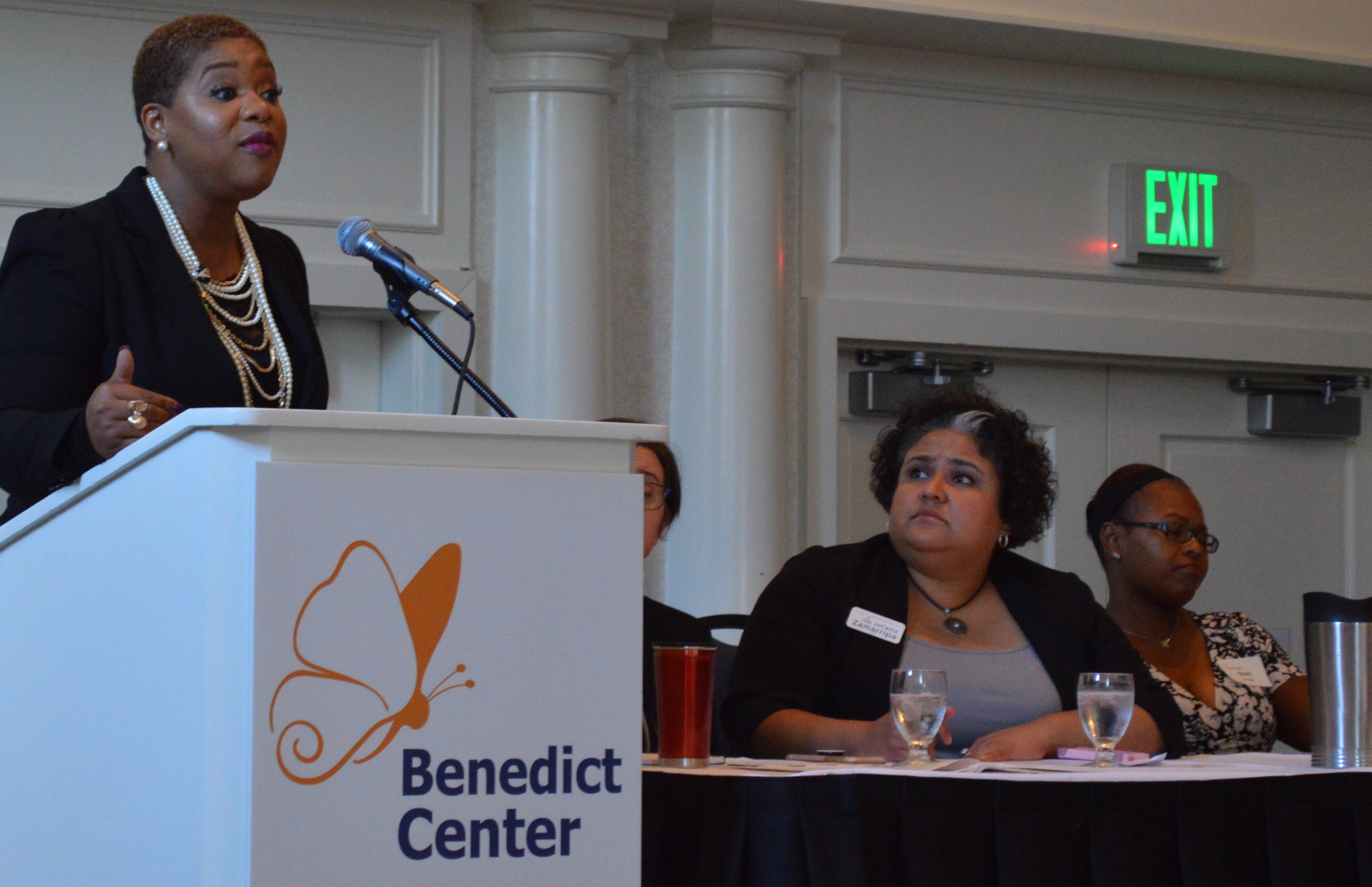 Arnitta Holliman says part of combating the problem is going after the people buying the sex. (Photo by Ana Martinez-Ortiz)

Is human trafficking a public health issue? The speakers at the Benedict Center’s Women and Justice conference said yes.

Milwaukee is one of the nation’s hotspots for human trafficking. According to a report by the Medical College of Wisconsin, 340 individuals were believed or confirmed to have been trafficked between 2013-2016. Many more victims are under the radar.

Dr. Staci Young, director of the Center for Healthy Communities and Research Division at MCW, said public health focuses on diseases or conditions that affect the community, not just the individual.

For example, Benedict Center’s Sisters Program partners with the Milwaukee Police Department and the District Attorney’s Office to divert women from the criminal justice system. The Benedict Center found that between 2013 and 2015 more than 1,000 arrests had been made involving the same 704 women.

The program emphasizes that no matter a woman’s past, all are invited to participate, said Sisters Program Director Arnitta Holliman.

The Sisters Program strives to understand how women become part of the sex trade. While some are forced into the trade by family members, others find themselves trading sex to survive. Many are dealing with poverty, homelessness, mental illness and drug addiction, she said.

“The right set of circumstances will put you in the situation to do things you wouldn’t think you would do,” said Holliman.

One of the causes of sex trafficking is systemic racism. Many of those trafficked are women of color, she said. MCW found that of the 231 individuals it analyzed, 65 percent identified as black, 24 percent as white and 7 percent as Hispanic.

Because of social bias, some women are considered undeserving of help, Holliman said. That way of thinking needs to stop, she added.

Since trafficking victims may be homeless and living in poverty they may need multiple services, such as housing assistance, substance abuse treatment and medical care. Shelter may not be sufficient. In addition, not every shelter is a safe place, said Holliman.

Since 2015, the Housing First program has provided housing for the chronically homeless. According to James Mathy, housing administrator at the Milwaukee County Housing Division, when people feel secure in their housing arrangements they’re more likely to seek assistance in other areas.

“If somebody is on the streets they’re eligible for housing,” he said.

He noted that women may become involved in the sex trade because they are homeless. Permanent housing helps them et their lives back.

MCW research shows a large number of victims are young people. Family members may target their younger relatives. In addition, teens who feel rejected or display low self-esteem are more likely to be the target of traffickers.

Claudine O’Leary, a community educator and youth advocate, said that sometimes young people get involved in the sex trade because it’s where they receive affirmation. This is particularly true of young people who identify as LGBT, she said.

O’Leary also said that young people may not see themselves as sex workers. They use phrases such as “helping my family out,” or “getting money” to describe what they do, she said.

Part of addressing the problem is knowing what language to use, according to O’Leary, who works with Represent, a nonprofit that helps teens who have experience with sex trafficking. During support groups, kids hesitate to open up because adults don’t always listen, she said.

“Young people have a lot to say.”