You are here: Home / Home / Carousel / Panel grapples with gentrification and low-income minorities
Share this... 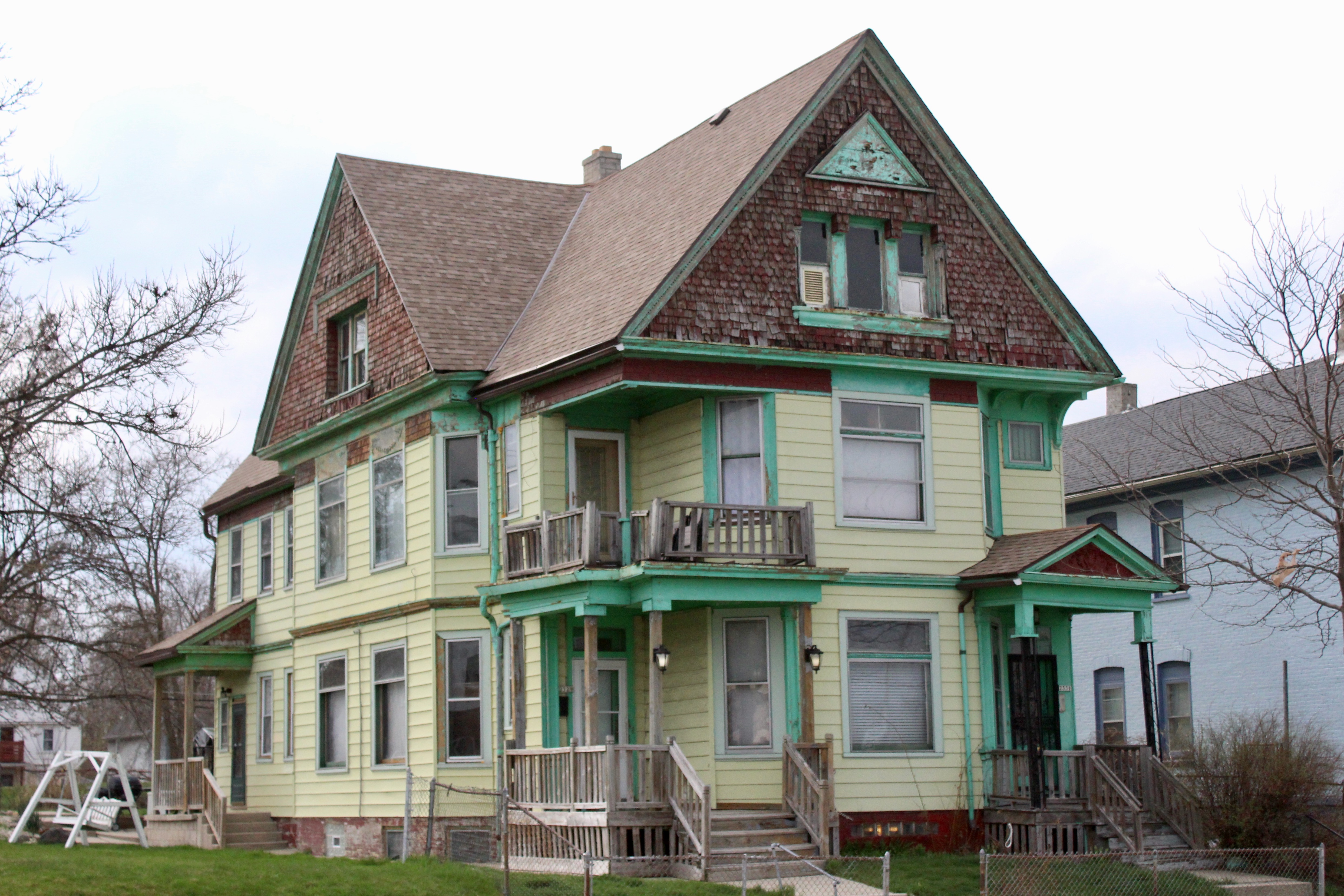 Many central city houses, such as this one in Bronzeville, are old and in need of repair. The cost of maintaining them is too much for many owners. (Photo by Elliot Hughes)

Real estate developer Kalan Haywood Sr. grew up in the Brewers Hill neighborhood when it was “99.99 percent people of color, both black and Latino.” He and his mother still live in the recently gentrified neighborhood near downtown. Some of the changes they have seen are for the better — their daily exposure to street prostitution has stopped — but many changes are not. Most of their new neighbors are transplants with no sense of the neighborhood’s history, Haywood said. 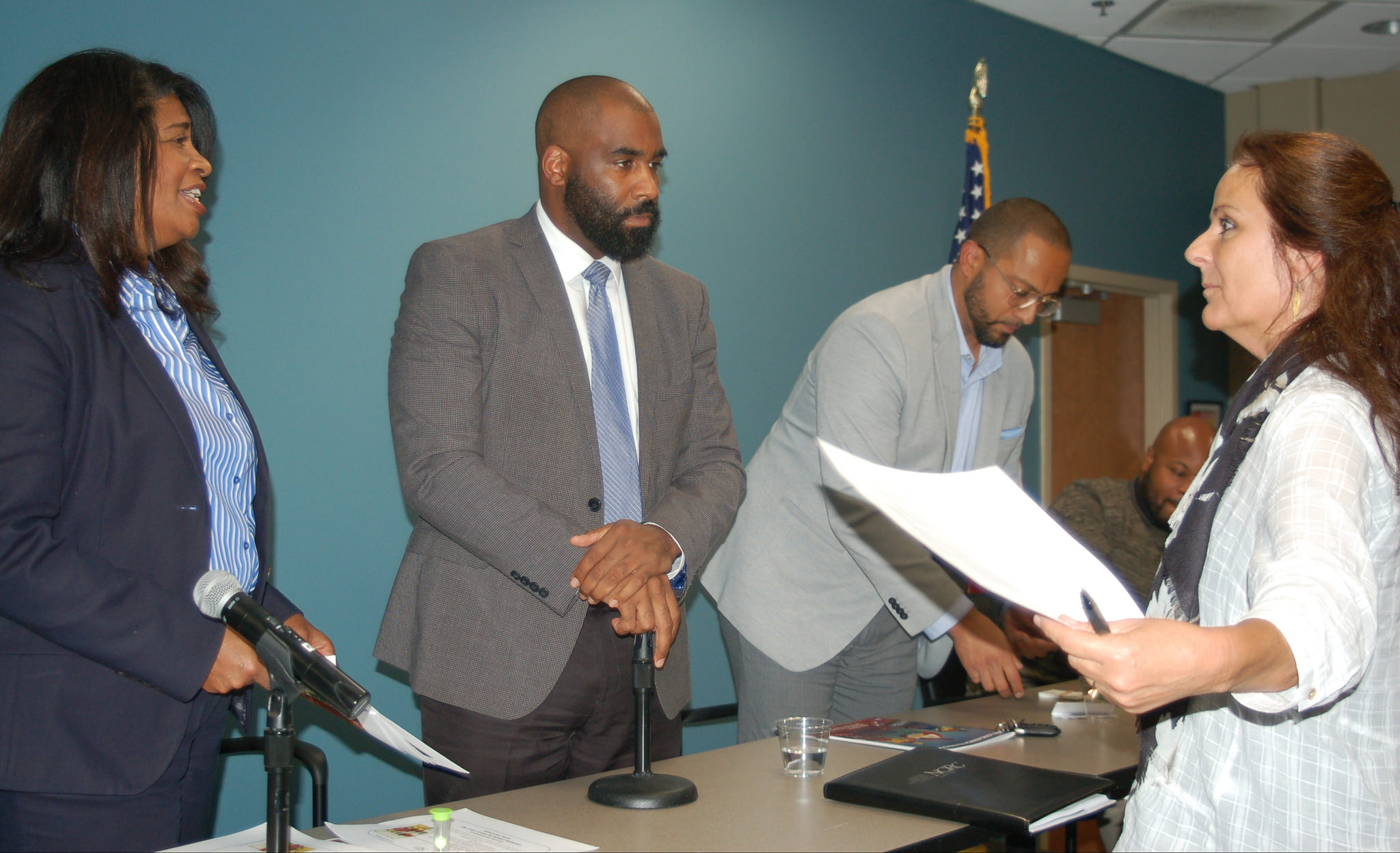 As the two sat on their porch last summer, most passersby barely gave them a nod. “Why do they look as us like we’re the visitors?” asked Haywood’s mother, who has lived in the neighborhood since she was a child.

Haywood, president of the 19-year-old Haywood Group real estate and investment firm, spoke last week on a panel about gentrification. In light of the boom in downtown development, panelists discussed whether it is possible to revitalize central city neighborhoods without displacing the residents who are already there.

“How can we do development in a way that the winners aren’t white and wealthy, and the losers aren’t poor and black? How can we do real estate development in communities that have been disinvested for generations so that it benefits the people who already live there?” asked Sharon McGowan, moderator and NNS editor. In addition to Haywood, the panelists were Donsia Strong Hill, executive director, Local Initiatives Support Corporation (LISC) Milwaukee; Joaquin Altoro, vice president of commercial banking, Town Bank; and Keith Stanley, executive director, Near West Side Partners.

The panel discussion was cosponsored by Milwaukee Neighborhood News Service and Saint John’s on the Lake, and was held at the Milwaukee Center for Independence, 2020 W. Wells.

Haywood noted that there are two contrasting views about “who owns (Brewers Hill), who’s invested in it, who belongs here.” He illustrated the disconnect between the “gentrifiers” and long-time residents such as his mother with an anecdote about a recent meeting of the local residents’ association. When Haywood told a board member that his mother, who does not use a computer, didn’t know about the meeting, the board member shot back, “she should have gotten the e-mail.”

The city’s anti-displacement plan defines a gentrifying neighborhood as “one that exhibits a reduction in the percentage of households of color while household incomes increase more than the city average.” Altoro pointed out that in Milwaukee race is central to the issue because a high percentage of low-income residents are people are of color, while higher-income residents  “usually live outside of Milwaukee and … are not of color.”

Strong Hill said gentrification is about more than race and income; it can disrupt a neighborhood’s culture. Citing examples of neighborhoods in Oakland, California, and other cities, she described new residents calling police on long-time residents for fishing and having outdoor barbecues that last into the night — things they have been doing in their neighborhoods for decades.

“When you culturally displace or attempt to change things that … have happened for generations in the way that people live, that is also gentrification that leads to displacement,” Strong Hill said.

Altoro said white people making investments in disinvested neighborhoods usually think of gentrification as a positive thing. “They (say), ‘These neighborhoods … need this investment … because of the blight and vacancy. There’s nothing happening there. There’re issues of crime.’” But we must be respectful and understand that there are people living here when we develop in such neighborhoods, he said.

Though gentrification itself, when the word is used to mean “create and improve and make things better and … more intact,” is not negative, it has taken on a negative connotation, Haywood said. Displacement of people of color as a result of gentrification in neighborhoods around the country — including Brewers Hill, which he called “a poster child” for gentrification — has motivated him to deliberately create opportunities for “the have-nots, or the forgottens,” he said.

In Milwaukee, there needs to be a change in mindset, the panelists agreed. They gave examples of prominent white leaders ignoring that more than 40 percent of Milwaukee residents are people of color when talking about developing the city. Haywood said there was pushback from parts of the white community when his company was chosen to redevelop the historic Germania building downtown into mixed-income apartments. They made it clear that they opposed black people coming downtown.

Asserting that every element of gentrification can be controlled, Haywood said that the reason they are not is because it is not a priority.

“If you want to do something, you make it happen. I think that there are enough players at the table and there’s enough conversations being had. Resources and dollars are not the issue.” He added that people are making money on gentrification. “They think it might be a good thing so why would they fight against it?” Haywood said.

Panelists also discussed whether segregation is bad for communities of color. Haywood said, at least as far as education is concerned, it is. But Altoro, who is Mexican and Puerto Rican, suggested that there might be a silver lining.

“I don’t really think the neighborhoods will be highly integrated in my lifetime. If that’s the case, is there a way that we could take segregation and see economic development success?” he said, pointing to vibrant ethnic neighborhoods such as Pilsen in Chicago as a model.

The Hmong community is one of the most entrepreneurial in Milwaukee, Altoro said. The Asian market at 76th Street and Mill Road represents “a microcosm of exactly what I’m talking about in a building.” If the city accepted that people like to live with members of their own racial, ethnic or cultural group, it could lead to neighborhoods such as Pilsen and the many Chinatowns in cities across the country.

Haywood said that he intentionally developed the Germania building with about equal numbers of market-rate and affordable units because he thinks people of different income levels living together will affect each other in positive ways.

Haywood, who admitted to feeling conflicted about segregation, noted that some resources come along only when white people come into a neighborhood. Banks make loans and influence politicians and police departments to clean up problems such as prostitution after they’ve ignored similar requests from poorer residents for years. And property values rise.

“When you’ve got a bunch of people with no money and no food and no hope and no desire and no dream in one block, in one area, in one community, and you’ve got a police department that eats up 100 percent of the real estate tax paid to the City of Milwaukee,” the challenges are great, Haywood said.

In response to a question about what city policy panelists would like to see changed, Donsia Strong Hill said the city’s policy of selling vacant lots to adjacent homeowners for $1 removes an opportunity “to bring families who are living in areas of concentrated poverty and have them live among people with different social mores.” She added that it also reduces population density in stable city neighborhoods, since the lots are not developed.

Stanley would like to find a policy that would make “cheap money” or grants available for homeowners to make repairs and modifications so, as they get older, they can stay in their homes. He added that new owners also need access to funds to buy into the neighborhood and fix up the homes.

Max Nawara shot and edited the video clips that accompany this story.