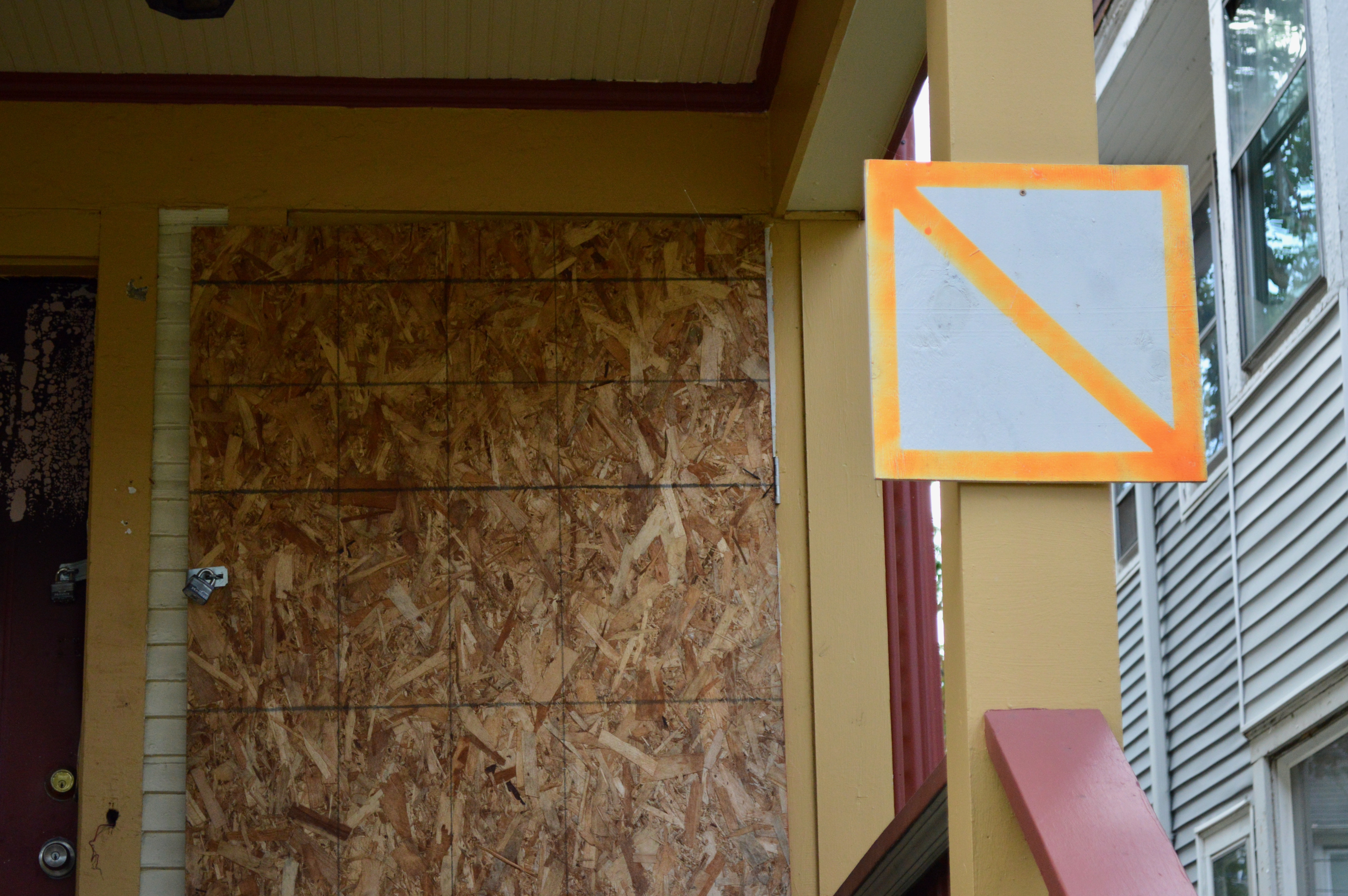 A white placard with one or two orange slashes warns firefighters about potential dangers in abandoned or vacant buildings. (Photo by Analise Pruni)

A dilapidated old house in the 3000 block of West Juneau Avenue has locked and bolted doors, jagged-edged windows and chipped paint in faded blue and pink. It also has a roughly 12-by-12-inch white plywood sign bearing a faded orange slash. It is one of 178 vacant homes or abandoned buildings around Milwaukee displaying the sign.

For firefighters, one or two orange slashes on the signs are a warning that there are hazardous conditions inside. One slash means there could be danger, but proceed with caution. Two slashes or an “X” means there is extreme danger or structural damage. For Ald. Robert Bauman, the signs are invitations for criminal activity. Some residents in neighboring houses aren’t quite sure what they mean.

At a recent meeting of the Common Council’s Joint Committee on Redevelopment of Abandoned and Foreclosed Home, fire officials explained the appearance of these signs. The Milwaukee Fire Department and the Department of Neighborhood Services defended the placards as essential for firefighter safety. However, Bauman raised several concerns.

“Placing signage on a home that says the property is vacant is essentially a scarlet letter,” said Bauman, chair of the committee. “It alerts criminals that the property is ripe for the picking to strip building materials, vandalize or engage in other illegal activities there.”

According to Fire Chief Mark Rohlfing, the signs were instituted in 2009 by then-Fire Chief Douglas Holton to signify potential building hazards to firefighters. The potential hazards are also relayed to firefighters through computers in their firetrucks. However, Rohlfing argued that the small font on the computer screens and the short time responders have to assess the hazards during a fire emergency justify the physical placards. 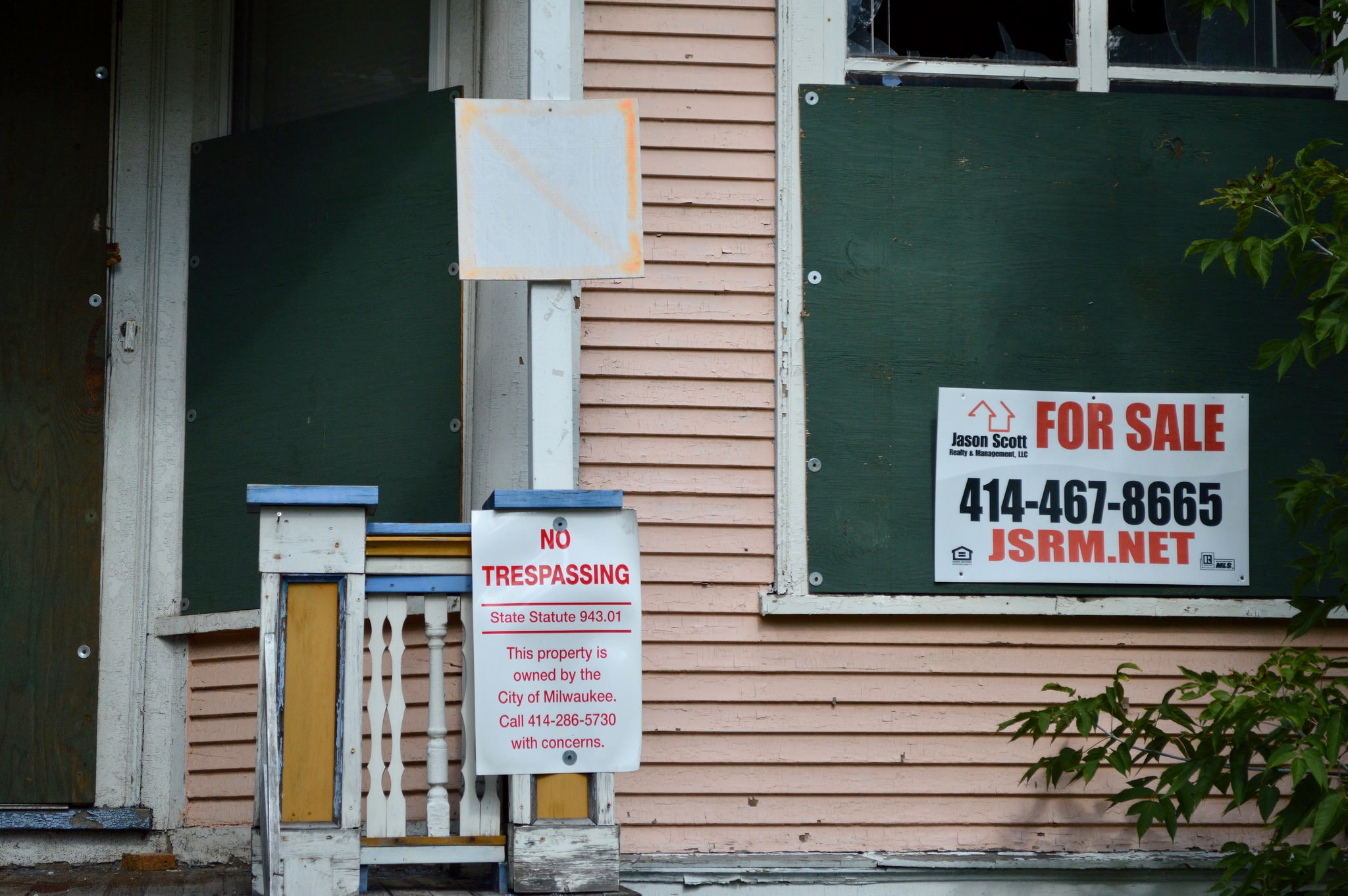 Broken and boarded up windows are a sign that this house is vacant, but a faded orange slash on a white placard warns firefighters of potential dangers inside. (Photo by Analise Pruni)

Different versions of this program have existed for nine years. However, Bauman claimed an official memo announcing that the fire department was working with Department of Neighborhood Services on the policy wasn’t distributed until March 1.

“What are we chopped liver here, for not being in the loop on this?” Bauman asked.

In an informal survey, some community members in Bauman’s district said they had noticed the signs, while others had not.

For the last year, Michael Benton has lived next door to a vacant house displaying one of these signs. He had seen others like it around the neighborhood, but said he did not know what they meant.

“It looks kind of like graffiti, so I didn’t know it was the fire department,” Benton said.

Benton said he wasn’t sure if the signs attract crime, but that he has noticed plenty of suspicious activity on the vacant property. He saw teenagers drinking on the porch recently and thought there could be other illicit activities and possibly drug dealing.

“It seems to me you need to get together and get somebody to come inspect these places and either get them up [and running] or take them down,” Benton said. “It leaves an opening for criminal activity and people that are homeless [to enter].”

Matt Bush, who has lived in the area for three years, said he has never noticed the white placard with an orange slash on the vacant building next to his apartment building.

“As far as [the placard] bringing crime to the area, I think that’s false,” Bush said. He added that he doesn’t see a lot of crime in his neighborhood in general.

While some other residents said they had noticed the signs, they all seemed unaware of their function.

Rohlfing acknowledged the lack of communication to the community and the Common Council about the policy, but reiterated that the placards were needed for firefighter safety.

“I want to make sure that everybody understands that these [buildings] are vacant, condemned, set for demolition, so these aren’t anything but bad properties,” Rohlfing said. Boarded-up windows, previous fire damage and general disrepair indicate that the houses are abandoned, he argued, not the placards.

According to Rohlfing, of the 3,538 vacant properties in the city of Milwaukee, 428 are on the city’s demolition list. Fire crews and incident safety officers visited all of those properties and placed the placards on 178 of them. Another 250 were already razed, being rehabbed or remodeled. He said firefighters all over the country use this visual tool.

Bauman said he feared that more than 178 vacant or abandoned homes were being marked. However, Rohlfing assured him that 178 is accurate. Bauman also commented that a policy affecting that many buildings should include input from the Common Council.

Bauman said he doubted the effectiveness of a physical sign in a digital age, especially a sign that could be ripped down and might attract criminal activity.

Bauman said he and Rohlfing came to a “gentleman’s agreement” that communication between the fire department and council members would improve. Bauman also suggested that the policy be adopted as an ordinance to avoid further confusion.