You are here: Home / News / Arts and Recreation / Youth coach uses football to teach players life lessons on and off field
Share this... 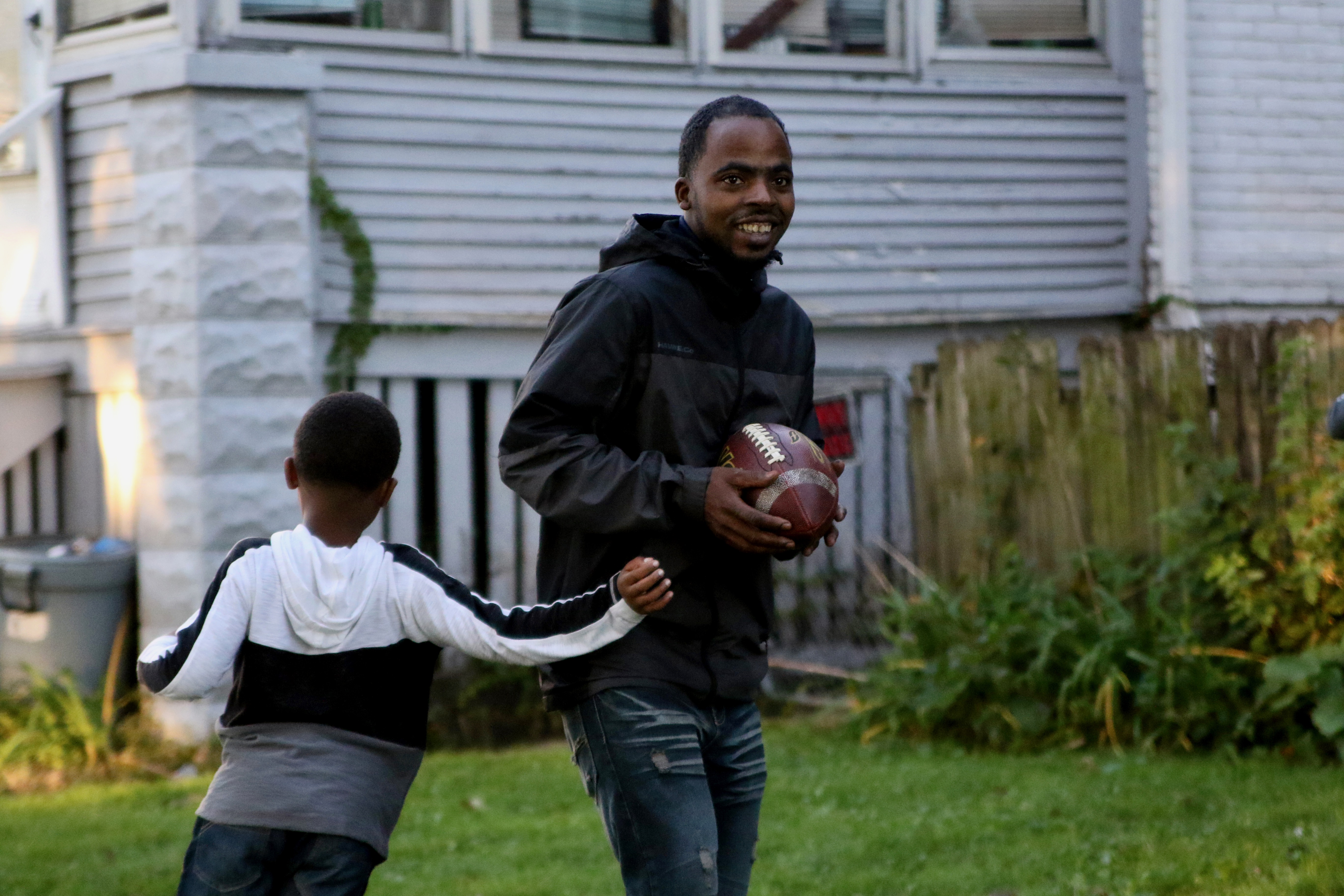 Jamar Lockwood and his son, Jaheim, play football in their front yard. (Photo by Max Nawara)

All eyes are on Antwon Compton, running back for the Milwaukee Bears youth football team, as he ducks and weaves past the Milwaukee Steelers’ defensive line. His mother, Zemeca, runs down the sideline alongside her son, cheering at the top of her lungs. The spectators erupt in applause as Antwon scores a touchdown.

Antwon’s mother credits his success with the strong coaching style of the team’s head coach, Jamar Lockwood. Lockwood is more than a coach of football; he tries to coach children’s lives.

“He’s a good role model. My son loves him,” said Compton. “He’s a good father figure toward Antwon … I love him, too!”

Lockwood, 39, coaches football for the Milwaukee Neighborhood Children’s Sports League. The league, which has been operating in Milwaukee for 60 years, is a nonprofit organization that encourages youth development through football and cheerleading. It works to help children develop solid leadership, teamwork and interpersonal skills at a young age. Lockwood also fosters a sense of friendship and family.

“I try to push those kids to new heights,” Lockwood said. 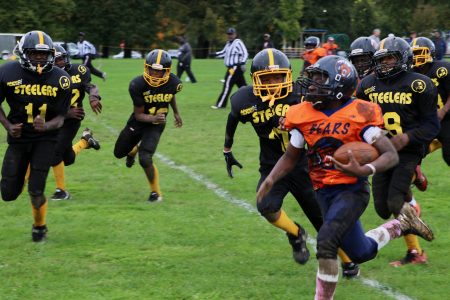 Milwaukee Bears running back Antwon Compton carries the ball for a touchdown. (Photo by Max Nawara)

Originally from Gary, Indiana, Lockwood got involved in football and basketball as a child. His father was a referee when he was growing up, so he was always exposed to sports. He first started playing football in eighth grade but wishes that he had begun earlier.

“I didn’t realize how fun football was,” Lockwood said. “I was like ‘Wow, this is fun. I should have been doing this a long time ago.’”

Lockwood took a liking to the sports teams of the nearest major city, Chicago. His love for Chicago sports, especially football, influenced him to become a coach.

He first started coaching for the Peewee division of the Raiders team. After six-and-a-half years, he became head coach of the Bears, who practice at Johnsons Field in Lindsay Heights. He has been with the Bears for four years, and with the league for about 10 years.

“Coach Lockwood is one of our most outspoken and dedicated coaches,” said Palone Williams, secretary of the league’s executive board of directors. “I’ve been doing this for years and working with him has been phenomenal.”

Williams emphasized Lockwood’s commitment to his team and the league. She said that at every game Lockwood cheers on other teams and is friendly with the other coaches.

“I’ve got kids of my own, so I really started getting into it with the boys — how can I keep them active and committed and keep them busy and balance out their days,” said Lockwood.

Lockwood sees football as a perfect sport to teach kids structure on and off the field. “You’ve got to have kids that buy into you and start playing hard for you. That’s how you build that camaraderie, like a family. That’s how you start winning games.”

Lockwood also tries to get other families involved with the team as much as possible.

“We do birthday parties, we go out to eat, we go watch high school games with them, go shopping. We try to bring the families, too. It’s more than just football,” Lockwood said.

Tedo Wilson, the mother of one of Lockwood’s players, said that he makes sure the children are doing well in school. He often enforces discipline if grades are slipping.

“He calls and texts parents to make sure homework is done. If it’s not, they do laps,” said Wilson.

“[The Neighborhood Children’s Sports League] keeps football leagues going every year and they keep kids from getting in trouble and off the streets,” said Lockwood’s 12-year-old son, JJ.

“It keeps [kids] locked in for at least half of the year,” Lockwood noted. “They always have something to look forward to. They aren’t just at home playing video games; they’re busy. When you’re bored, time goes slow and you find bad things to do.”