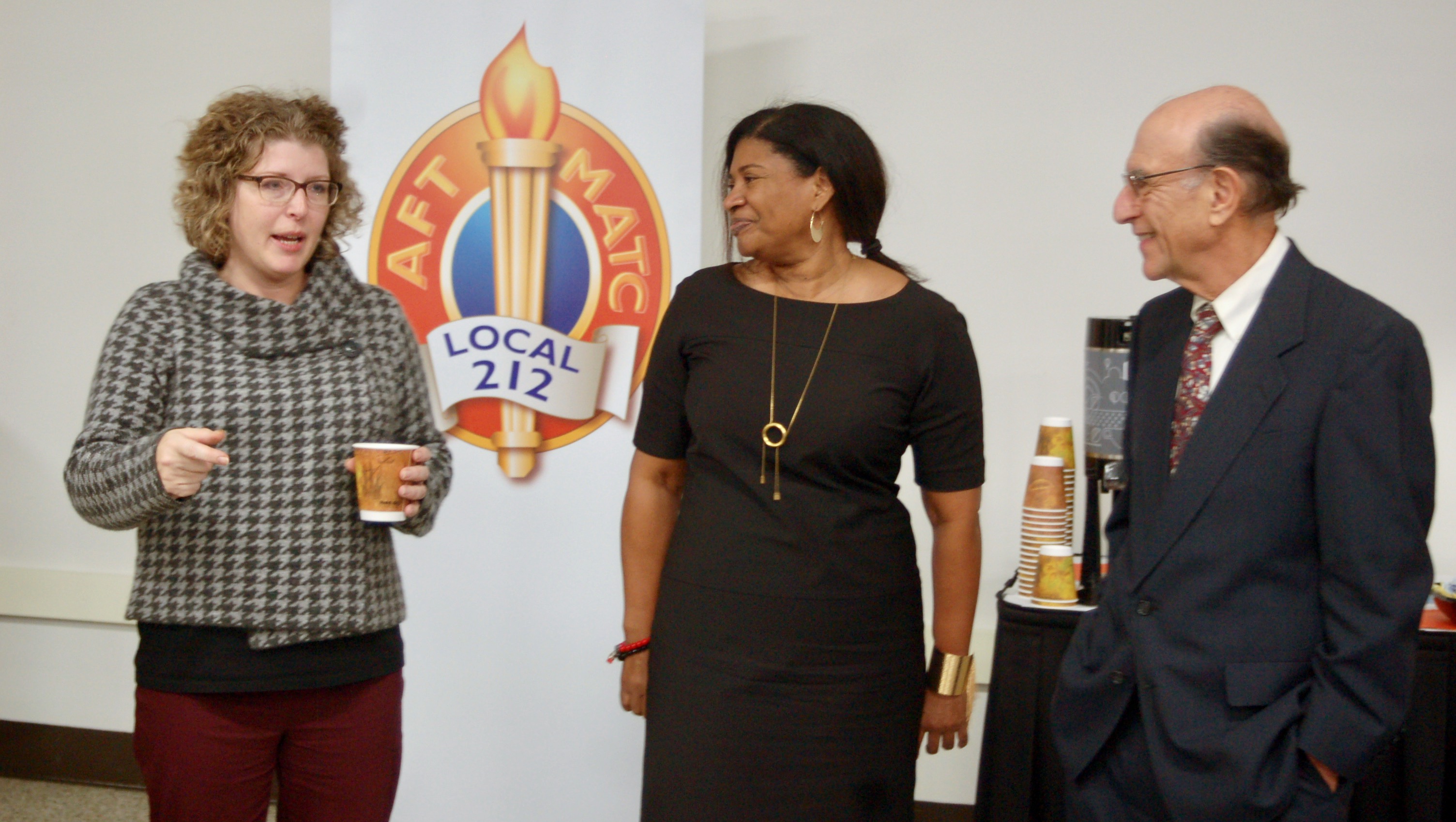 From left: Kori Schneider-Peragine of the Metropolitan Milwaukee Fair Housing Council (MMFHC), Donsia Strong-Hill of LISC Milwaukee and author Richard Rothstein chat before the community lecture on his book, “The Color of Law.” (Photo by Allison Dikanovic)

Richard Rothstein came to Milwaukee to talk about his nationally acclaimed book, “The Color of Law,” which details how federal, state and local governments deliberately segregated metropolitan areas all over the country. Though he uses examples from other places in the book, the policies he discussed occurred in Milwaukee too, and drastically shaped the makeup of the city.

Rothstein said he hopes his book shows cities like Milwaukee — a place that often is called the most segregated in the U.S. — that residential segregation is part of a broader, national force affecting everyone. He said it’s important to note that the commonalities among cities’ segregation is more important to consider than the marginal differences, and that the policies that got them here could be reversed if there is political will.

“The whole purpose of the book is to give people agency, to help them understand that our government created this,” he said. “The residential boundaries of every metropolitan area of this country violate the constitution, and we have an obligation, all of us, to reform it, to remedy a civil rights violation.”

He said the history of residential segregation is the root cause of many issues in the education, health and criminal justice systems.

“All of the racial disparities we see today now can in some way be traced to that conscious and deliberate segregation that our government engaged in,” agreed Kori Schneider-Peragine, senior administrator of the Inclusive Communities Program at the Metropolitan Milwaukee Fair Housing Council, one of the organizations that invited Rothstein to speak.

Rothstein makes the case that residential segregation in the United States is de jure, not de facto. This means that it was caused by explicit government rules, regulations and policies, not just by a conglomeration of people’s individual choices.

“None of us like it, but we all think that residential segregation happened just naturally,” Rothstein said. “But if we understand that it’s not a natural phenomenon, but that it’s the product of explicit government policy, then we can begin to have the conversations that are necessary to develop policies to undo it.”

Some of the policies from the 1930s-’70s outlined in his book demonstrate how government-mandated segregation undermined the ability of black families to own homes and accrue wealth. Rothstein pointed out that because of this, while the average income of an African-American person is about 60 percent of the average income of a white person, an African-American’s average wealth is about 5 percent of an average white’s wealth. 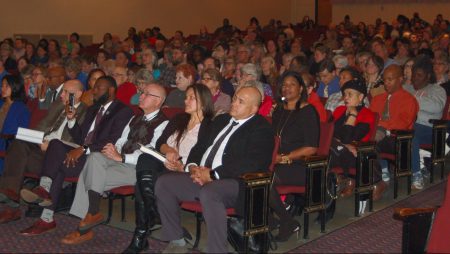 The Cooley Auditorium at Milwaukee Area Technical College (MATC) was packed for the culmination event for the community book read of “The Color of Law” by Richard Rothstein. (Photo by Allison Dikanovic)

He noted that public housing was officially segregated, and that the development of suburbs was heavily subsidized by federal dollars on the condition that new suburban homes would only be sold to white families. He explained that to receive support from the Federal Housing Administration (FHA), the deed of a home needed to have a racially restrictive covenant that prohibited African-Americans from ever purchasing the home.

While subsidizing the development of exclusively white suburbs, the FHA simultaneously refused to insure mortgages in neighborhoods deemed for African-Americans, in a process known as “redlining.” This led to the concentration of African-American families needing to rent in disinvested central city neighborhoods.

Reggie Jackson, the head griot at America’s Black Holocaust Museum, teaches this local history and often references Rothstein’s work in his presentations. He said that the use of racially restrictive covenants was pervasive in Milwaukee and all of its surrounding suburbs.

For example, according to data collected by MMFHC, the covenant for the Washington Highlands neighborhood in Wauwatosa in 1920 read, “At no time shall the land included in the Washington Highlands or any part thereof, or any building thereon be purchased, owned, leased or occupied by any person other than of white race.” And as late as 1961, the mayor of Mequon instituted a “negro building ban.” These are among a plethora of similar restrictions in suburban communities.

Jackson said redlining was used in Milwaukee to prevent black families from accessing mortgages, and that even before redlining was enforced by the FHA starting in 1938, local developers and officials gathered in 1924 to draw a box around where they intended to allow the increasing African-American population to live in the city.

All of the public housing was officially segregated, and in multiple instances — such as with the Hillside project — black people had to advocate to access it. According to MMFHC, black veterans were denied access to veterans’ housing projects in 1949 and were referred to the Hillside project, on the near North Side near the area known as Bronzeville. Additionally, Jackson said that urban renewal projects in Milwaukee destroyed thousands of homes in predominantly African-American neighborhoods without ever replacing them.

“The government played a much bigger role kind of behind the scenes than people were aware of, and that’s what really important when we think about how we got here,” said Jackson.

Schneider-Peragine and Jerusha Daniels, housing program officer at Local Initiatives Support Corp. (LISC), said that the need for a common knowledge of the city’s past was the reason they invited Rothstein to Milwaukee.

MMFHC and LISC partnered up to coordinate a community book read so that Milwaukeeans could discuss the book and develop this shared understanding. More than 90 book clubs read “The Color of Law” last summer and into the fall.

“I hope that [conversations about the book] shift the fault, that communities have an understanding that it wasn’t that people chose to be born into certain circumstances or to move into these disinvested neighborhoods,” Daniels said.

“You can’t continue to do your job the same way when you’ve got this in the back of your head,” she said.

About 350 people attended the lecture, which was followed by a question-and-answer session facilitated by Reggie Jackson and Jarrett English, a senior field organizer for a local civil rights organization.

Suzanne Osetek attended the event with her daughter, Diane Goryl. Osetek learned about the community book read through the Milwaukee Public Library, and she and her daughter decided to organize a book club at Saint John’s on the Lake, where Osetek lives.

“I knew some of the story of segregation and imposed segregation, but I didn’t realize how official it was and how deliberate it was at every level of government,” Osetek said. “That was shocking to me.”

She noted that she felt especially angry because she was purchasing a home about the same time that many of these policies were being enforced. “I knew that there were neighborhoods that were closed to black people, but I figured it was because the white people living in those neighborhoods didn’t want them there,” she said. “I thought it was a personal, very local position. I didn’t realize that it was sanctioned by government and promoted by government.”

Goryl said she was frustrated that this history was “glossed over” when she was in school and thinks that middle and high school curricula should address segregation policy more comprehensively. She said her children went to Marquette University High School and that that its curriculum seemed to better address “the ugly parts of our history.”

“The Color of Law” was required reading for Lisa Williams’ graduate class on race and public policy at the University of Wisconsin-Milwaukee. She said she witnessed a lot of what the book talked about growing up in Chicago — including overcrowded public housing projects after the Great Migration, the movement of white people to the suburbs and construction of highways through communities of color.

“You know how you think certain things, but you never could go to a source that identified it?” she said. “This book definitely identified what I have been thinking all this time, but I never could put words to it that would make it seem credible, but it’s very credible.”

Janette Herrera read “The Color of Law” as part of a Rid Racism book club organized by America’s Black Holocaust Museum and said she wasn’t surprised by what she read.

“It’s the truth. All of this stuff in here, I experienced this, coming from Mississippi, being involved in the movement, marching for fair housing,” she said. “We haven’t experienced fair housing, even though we marched. We still are pretty much experiencing redlining.”

Maybe redlining isn’t happening in the form that it used to, but Schneider-Peragine said that there are still plenty of instances of housing discrimination. She said that in addition to fighting individual cases of discrimination, the organization works to dismantle discriminatory policies that persist, such as exclusionary zoning.

“While zoning may not on its face look discriminatory, when it limits higher density, multi-family or affordable units, it has a disparate impact on people of color, persons with disabilities and single parents because of the wealth and wage disparity,” she said.

Schneider-Peragine noted that the Milwaukee County Board of Supervisors made progress toward fair housing during the summer when it passed an ordinance that prevents discrimination against renters using Section 8 vouchers, but MMFHC needs to continue finding ways to get people with vouchers into neighborhoods with more opportunities and resources.

Daniels said LISC is working to make sure that all neighborhoods have opportunities and resources by building wealth among residents with community wealth-building workshops, advocating for affordable housing and creating programs to support resident-driven development that will prevent displacement.

All attendees at the lecture received a ballot titled “Milwaukee Equity Now Initiatives” where they could vote on reforms they would like to see and identify ways to get involved in making change. Some of the options included creating more accurate history curricula, instituting inclusionary zoning policies, developing community land trusts or housing cooperatives, or supporting subsidized programs that would lead to more mixed-income developments, neighborhoods and communities.

“If we want something to happen, we’re going to need to come together and demand it,” Herrera said as she got up to leave the auditorium.