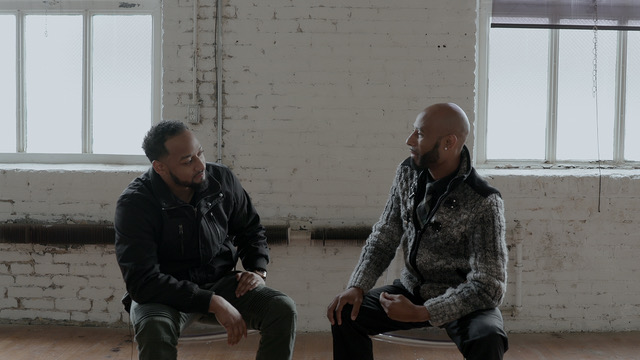 Laura Dyan Kezman, Nate Imig and Vianca Fuster directed “Invisible Lines” for 88Nine Radio Milwaukee, where they work as multi-media producers. It will premiere at the Milwaukee Film Festival on Oct. 27.

“Invisible Lines” is a feature-length documentary film about Milwaukee, through the eyes of 10 residents of color. With intimate interviews and art, they share their personal stories of segregation, racism and prejudice. No narrator. No script. Just conversations between people.

Invisible lines are something you feel rather than see, and they take many shapes. Whether it is an unwelcome feeling, a suspect glance, coded language or, more overtly, dress codes that aim to keep out “certain people” from popular bars and restaurants — Milwaukee is full of invisible lines. These themes, as well as colorism, biracial and queer identity, gun violence and police relations are addressed in the film.

How many times have you heard someone offhandedly say, “Milwaukee is the most segregated city in America?” Dozens? Hundreds?

It’s an unfortunate reputation that has been reinforced, rewritten and repeated so often that it has become self-fulfilling, as if nothing could ever change in the metro Milwaukee area. But there is an important nuance those remarks often miss: What does segregation feel like?

The film’s all-Milwaukee cast includes high school senior Amelia; Milwaukee’s unofficial black mayor, Reuben Harpole; biracial brothers and working artists, Darren and Vedale; mother and daughter Dianné and Luz, who offer a Spanish-language chapter to the film; community activists Vaun and LaToya, who discuss gun violence and colorism; and close friends Jeanette and Selma, who both identify as queer and talk about the role of chosen family in the LGBTQ community.

Each of the film’s vignettes also integrates a performance by a Milwaukee artist. Through spoken word, visual art, dance and music, they showcase the richness in Milwaukee’s creative community. Artists Darren and Vedale and musician Genesis Renji created original pieces for the series. Also featured are local musicians Lex Allen and SistaStrings, poet Karl Oye Iglesias and the Signature Dance Company.

The “Invisible Lines” series came on the heels of our last 88Nine Presents project, “National and North,” which explored the literal and figurative intersections of Milwaukee residents and their different neighborhoods along two of Milwaukee’s longest streets: National and North avenues. We wanted to dig deeper into these “invisible lines” of segregation in Milwaukee. The goal of this series is the same as the last: empathy.

Since our idea for “Invisible Lines,” it has taken many shapes: audio stories broadcasted alongside 88Nine’s musical programming, video episodes streamed on our digital platforms, a live episode screening event with a cast Q&A, a hashtag conversation in July called #MonthOfEmpathy and now, a feature-length documentary.

This is our most ambitious and real video project yet. It doesn’t have one message, but many messages and voices that all serve one call to action: simply, to listen.

Radio Milwaukee is planning future screenings and talk-backs for “Invisible Lines” in the coming months. It hopes to continue the conversation around the film, deepening Milwaukee’s understanding of the multi-faceted and nuanced impact of segregation and prejudice in the city.

Check InvisibleLinesMKE.com to view a trailer for the film and for future screening information.