You are here: Home / Home / Carousel / Residents hope Bader’s presence in Harambee helps ‘change the scenery’ through investment
Share this... 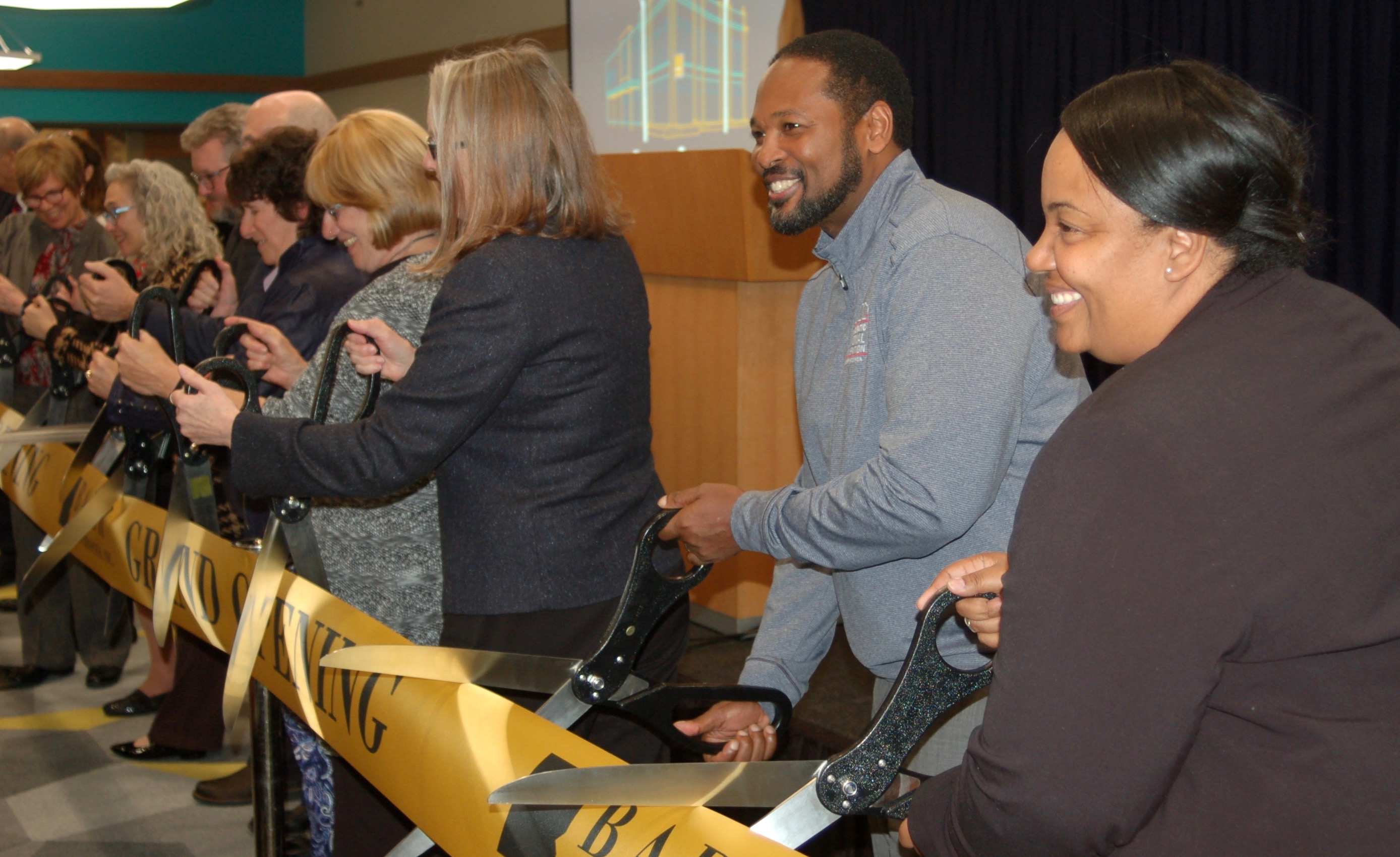 Frankie Thomas greeted each guest who arrived at the newly renovated, two-story historic building in the heart of Harambee with a warm smile, a firm handshake and an enthusiastic, “Welcome to Bader!”

“We went to the same school, right down the block,” Thomas explained.

They both attended Victor Berger Elementary School, a Milwaukee Public School that was renamed Dr. Martin Luther King, Jr. Elementary School in 1992. This sense of pride in the neighborhood’s assets, past and present, as well as hope for its promising future, was a resounding theme of the grand opening event for Bader’s new home. Thomas said he remembers a time when this area of King Drive used to be a commercial corridor with a bank, a television station and a sewing store, and said he hopes to see more businesses investing and changing the scenery in the coming years.

“It beautified the neighborhood,” Thomas said of Bader’s new development. “It made it more distinguished and makes it look like a better place to live in.”

Bader moved their offices from the Third Ward to Harambee as part of an $8 million investment in the neighborhood. It is the first foundation in Wisconsin that funds central city programs to also operate offices there.

“It is one thing to be downtown,” said Ald. Milele Coggs, who grew up two blocks from the foundation’s new location and whose district includes the development. “It is something else to be right in the community of people you are attempting to serve.” Coggs noted that Bader made a conscious choice to contract with firms in the district and those owned by people of color when constructing the building. 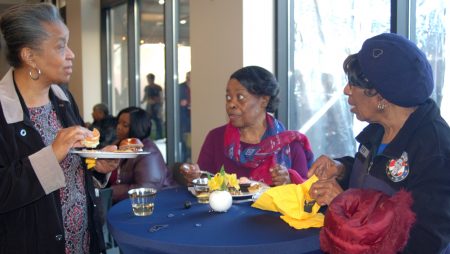 (From left to right) Julia Guyton, Sandra Mitchell and Doris Hopkins-Brown enjoy appetizers and discuss their ideas for activities and events they could organize at the Clinton Rose Senior Center, just a few blocks from the new Bader headquarters.

Similar to Coggs, Hamilton said he felt especially connected to the development. “I see classmates in the audience. … We are dismissing the myth that neighborhoods like ours have to be escaped from to find success,” he said. “To see such a group come to our home and commit to making change is something to celebrate.”

In addition to its focus on healthy aging, arts programming, youth development, workforce development and Jewish education, Bader — which has provided grants totaling more than $265 million since its launch in 1992 — intends to add a place-based component to its mission to invest more directly in the immediate surroundings. Frank Cumberbatch, the foundation’s vice president of engagement, is leading the initiative.

“We want to be a partner in this neighborhood,” he said. “We are no knight on a white horse. We came to work together with the neighborhood, to bring resources and work in a collective.”

Part of that place-based and partnership-building work began in the spring and continued into the summer when the foundation started hosting community listening sessions at its new space for neighborhood residents.

Doris Hopkins-Brown attended many of those meetings. “It’s my neighborhood and I wanted to make sure I was here to see what’s going on,” she said. She has owned her home between Auer Avenue and Ring Street for 47 years, serves on the board of directors of HeartLove Place and regularly attends programming at the Clinton Rose Senior Center.

Hopkins-Brown said she hopes that Bader’s headquarters can bring her neighborhood “more together” and she’s particularly concerned about local youth having safe and supportive places to go.

Julia Guyton, a program coordinator at Clinton Rose, said she participated in a neighborhood cleanup that Bader hosted during the summer. According to Cumberbatch, more than 1,000 residents helped beautify the area bordered by Capitol Drive on the north, North Avenue on the south, Holton Street on the east, and the freeway on the west. The foundation provided tools and equipment that the neighbors could then keep, in addition to hosting a celebration with food, games and music following the cleanup.

Josephine Key has been participating in a focus group on the topic of healthy aging, where local residents shared their thoughts with Bader staff about why they’ve stayed in Harambee and what resources would help them age there in a healthy way. Cumberbatch said conversations such as these will continue on a variety of topics and will inform Bader’s work.

“I love my neighborhood, but I would like to see some changes to make my block even better,” Key said. “We all need help with home improvement. In my neighborhood, I want my home to feel like it could be in the suburbs, with a beautiful front yard and beautiful interior… I really care about this place.”

Barbara Duncan also said she cares deeply about Harambee and is curious about what Bader’s plans are. “I know all of my neighbors,” she said. “It’s just like a family atmosphere. We’re close. We look out for one another, and I love that.” Duncan said that the fact that Bader invited her to their opening makes her feel optimistic that the foundation would be a good neighbor.

“When the trust level rises, when we deliver on things we may promise, and when neighbors recognize that we have delivered on those things, then and only then will we feel that we are true partner and a good neighbor,” Cumberbatch said.