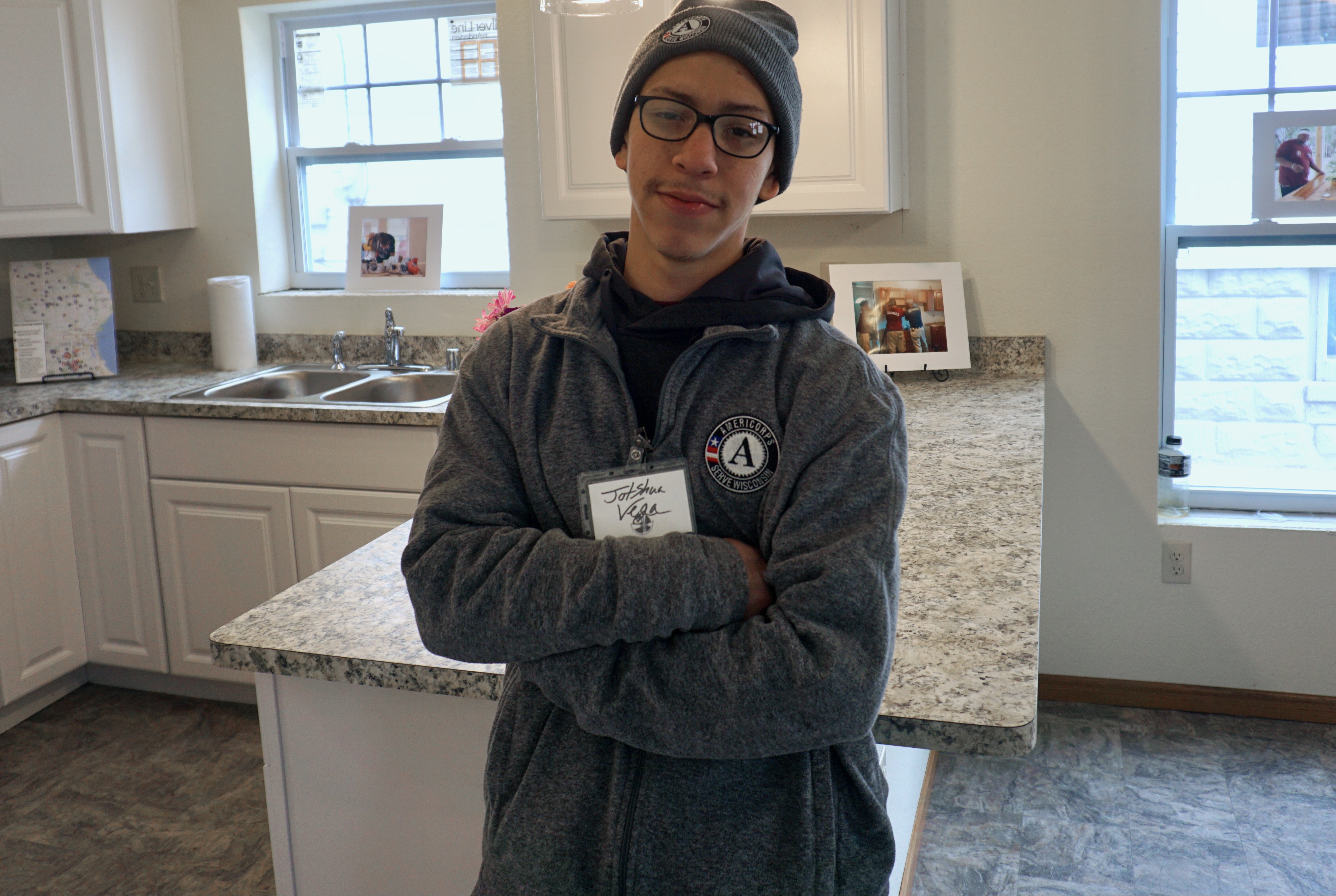 Jotshua stands in the kitchen of the newly completed YouthBuild house on the South Side. (Photo by Sarah Lipo)

Jotshua Vega Marcon arrives at the South Side home construction site two hours before his shift starts, and he usually packs up to head home about an hour after the rest of the team leaves for the day.

Vega Marcon is determined to learn the construction trade, and the house at 1979 S. 13th St. is providing a great learning opportunity. When Vega Marcon, 23, first started working on it a year ago, “It was an open house you could see through, like a skeleton,” he said. Back then, he said he barely knew how to correctly hold a hammer, and he watched videos to teach himself how to build stairs.

Vega Marcon, a resident of West Allis, is a participant in the Milwaukee Christian Center’s YouthBuild program, which provides young adults ages 18-25 with hands-on construction training, while creating homes for low- or moderate-income families.

John Kaye, a project director at MCC, is in charge of housing efforts. He said individuals can “go to school half time, work on getting their GED or high school equivalency and (also) learn to build a house.” All trainees are members of AmeriCorps.

Construction on the 13th Street house began in October 2017, about the same time Vega Marcon joined the program after hearing about it from a friend. Construction can take longer than a year, Kaye said, since trainees only work half days.

As long as individuals show up for work, they receive scholarship funds. Vega Marcon is now a full-time AmeriCorps member serving as a construction assistant for YouthBuild. “Now that I am a full-time member, I get more scholarship money,” he said. He’s earned $6,000 so far.

He added that as soon as he has enough money, he plans to go to Milwaukee Area Technical College and become an electronics technician.

Lois Nugent, the MCC YouthBuild coordinator, noted that many individuals have felt anxious about starting a new, unfamiliar job. “But, few of us have ever been handed a hammer and asked to go build a house,” she said. 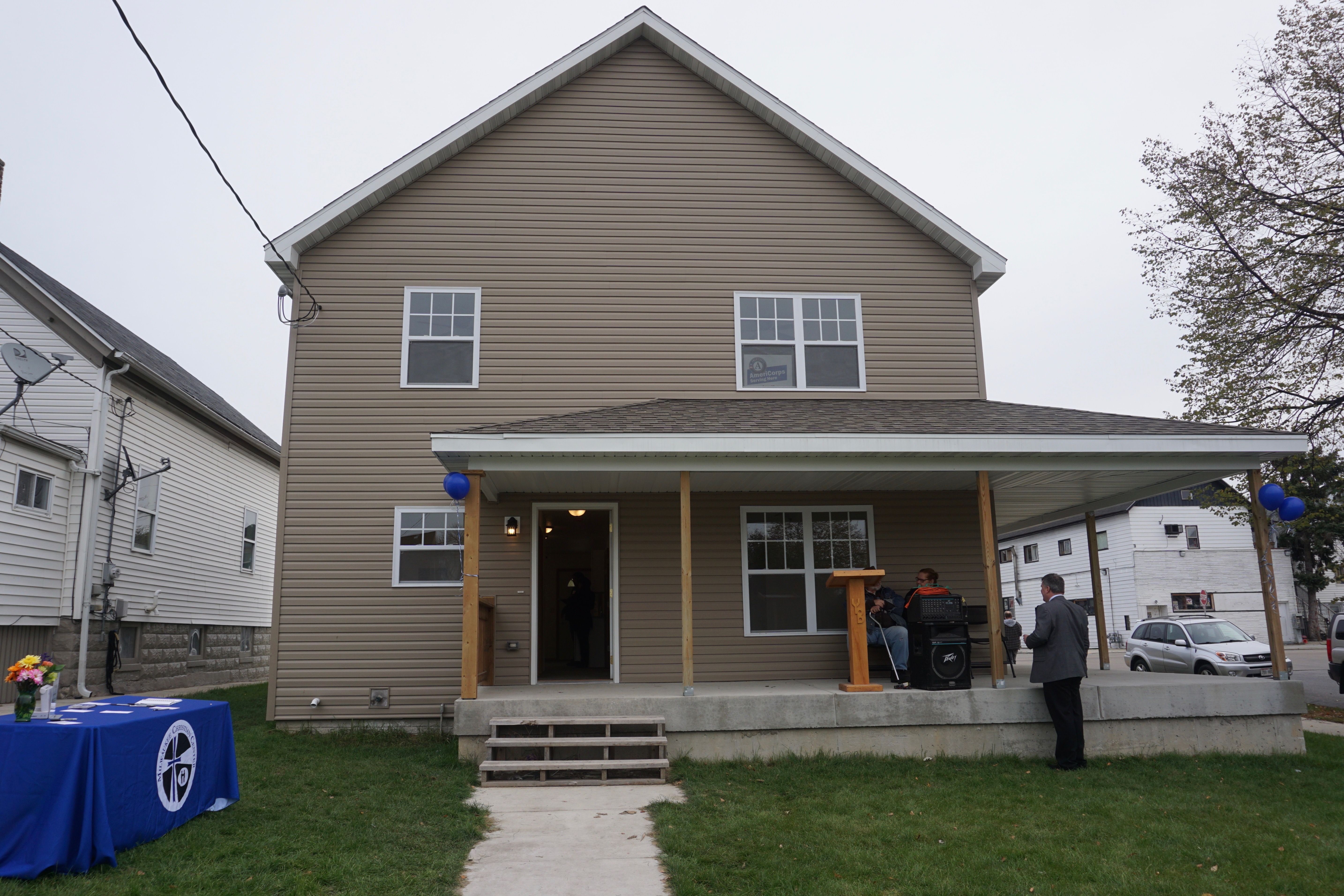 The most recently completed YouthBuild house is located at 1979 S. 13th St. on the South Side. (Photo by Sarah Lipo)

Vega Marcon set goals to finish his high school education and seek training that would lead to permanent family-sustaining employment, Nugent said, adding that he has earned a high school diploma and multiple industry certifications.

Along with building a house, Vega Marcon said he learned to cooperate with others and worked to improve himself. “It’s not easy. You got to be willing to be open-minded,” he said. He added that he loves being productive and busy.

Nugent said Vega Marcon stands out for several reasons. “Jotshua realizes learning doesn’t stop when you get your diploma,” she said, adding that he looked for opportunities to go above and beyond to help others. For example, Vega Marcon often volunteers at the MCC Senior Center, which provides healthy meals, recreation opportunities and health checks for those over 60.

Nugent added that leaders look for opportunities to make things better even when there’s little personal gain, while also supporting their team.

In addition to providing job opportunities for young adults and creating homes for low-income families, the program also demonstrates how far a person can go when given the opportunity, Nugent said. It also shows the impact they can have on their community, she added.

“When people move in, they become part of a neighborhood,” added Nugent. They are “invested in the neighborhood, and people take pride in their property.”

She mentioned a “rollover effect” on the neighborhood, adding that the residents living next door to the completed YouthBuild house recently put up new siding on their house.

YouthBuild is supported by the Corporation for National and Community Service, the Department of Labor (through a partnership with the Milwaukee Area Workforce Investment Board), the City of Milwaukee Community Development Grants Administration, HUD, and others, according to its website.