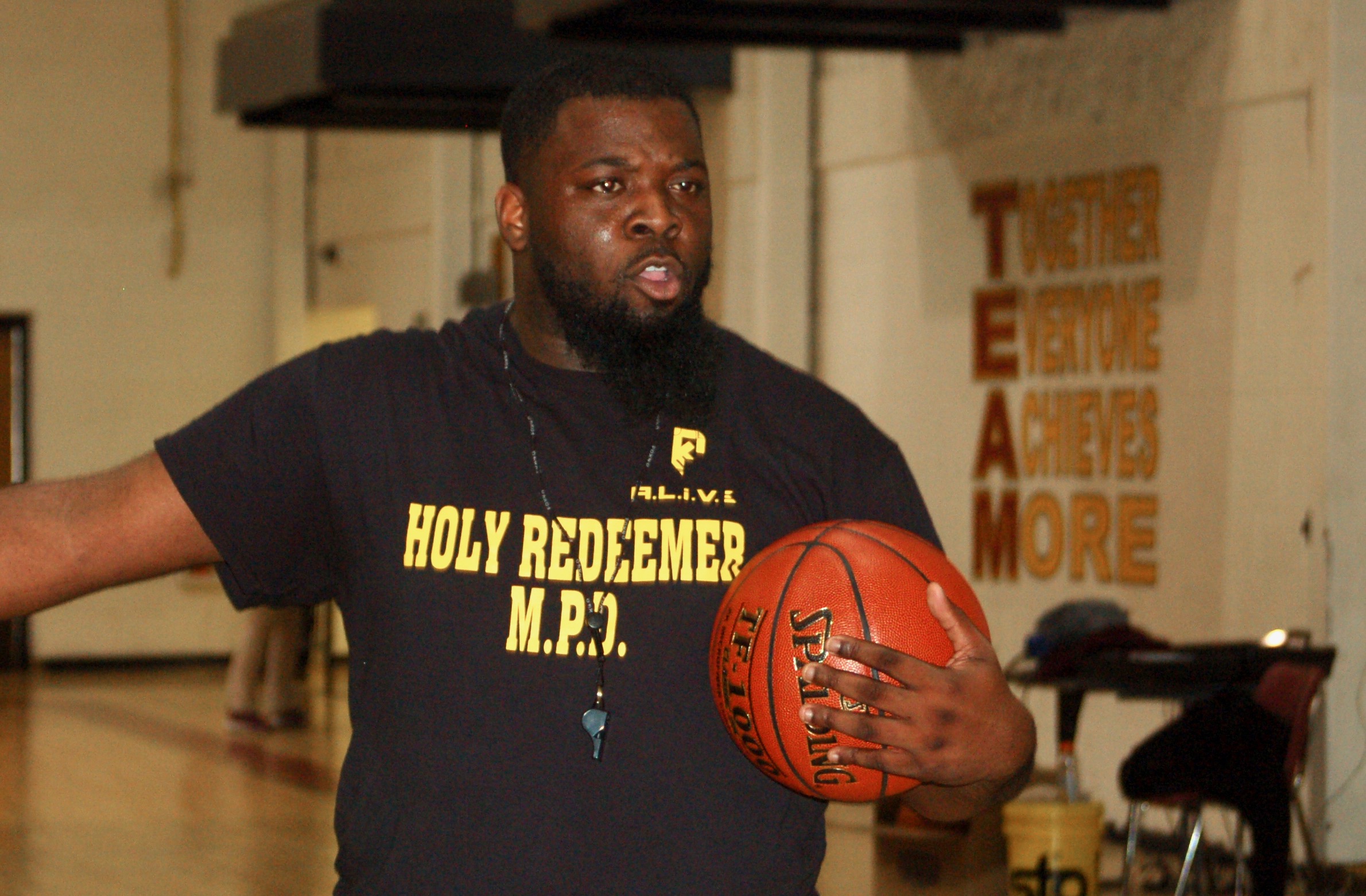 Jerome Gray is the varsity basketball coach at Young Coggs Williams High School and one of the 30 coaches participating in the pilot program, Coaching Boys into Men. (Photo by Allison Dikanovic)

At the end of practice on Tuesday, Jerome Gray gathered his basketball team at Young Coggs Williams High School into a huddle. After players put their hands in the middle and yelled, “family,” on three, Gray brought them into a classroom and took out his playbook.

But rather than talking about strategy or describing a new defense, he asked his players what the word respect means to them, and why it’s important. Before anyone took off their basketball shoes to go home, the team had a 10-minute discussion about what it means to respect themselves and those they are in relationships with.

Though a change of pace from the “hard” coaching style that Gray usually uses, he said his players appeared to still be engaged and interested in what he was talking about. That’s the point.

Gray is one of 30 coaches in Milwaukee participating in a pilot through the City of Milwaukee Office of Violence Prevention called Coaching Boys into Men. The 12-week program give coaches the tools and curriculum to facilitate conversations with their teams about healthy relationships, boundaries, aggression, communication, consent and equality.

Shana Kidd, violence prevention coordinator at OVP, got the idea to start the program after a meeting on the topic of sexual assault. She said it was clear that the way men think of themselves, treat women and behave in relationships is central to the issue of sexual assault, but she felt young men especially were lacking the knowledge, information and modeling of what it means to be in healthy, respectful relationships.

“Some of our young men are not being taught certain things or it’s going in one ear and out the other,” she said. 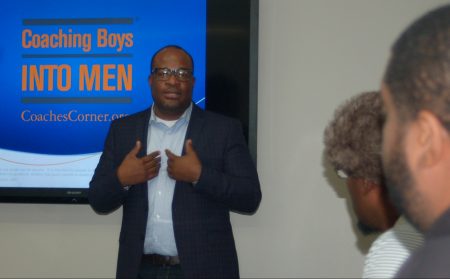 Reggie Moore, the director of the City of Milwaukee Office of Violence Prevention, addresses a group of coaches at the Zilber School of Public Health as part of a training on the Coaching Boys into Men curriculum. (Photo by Allison Dikanovic)

Reggie Moore, director of OVP agreed. “If we are really going to eradicate what we are seeing as far as the abuse and harassment of our women and girls in our community, we have to start with us as men.”

Kidd said she knew from her experiences working with young people that athletes often are leaders in their schools and have positive relationships with their coaches. So, she thought that if she wanted to reach young men, coaches would be a natural place to start.

“Sports has tremendous influence, not only in culture, but in our young people in general,” she said.

She found that a program such as the one she dreamed up already existed: it’s called Coaching Boys into Men, and was started in 2000 by the national nonprofit and advocacy organization Futures Without Violence. Since then, the program has been implemented across the country as well as internationally, and has been proven to work.

The concept is simple — leverage the unique influence that coaches have on their players to promote healthy and respectful relationships. Organizers and coaches hope that the impact could be huge.

Reggie Moore said that in a time when national leaders have dismissed violent language toward women as “locker room talk,” it’s the perfect time to shift the conversations happening in locker rooms to show that violence is not acceptable. “A lot of times the athletes in our schools and in our communities are leaders, and they’re the cats that other people follow,” Moore said. “So if we can reach them and change their mindset and change their behavior, then they can set the standard for other brothers in our community.”

Gray said that in a small school such as Young Coggs, 3500 W. Mother Daniels Way, students really look up to the basketball team.

“If I can just reach one of my guys, then that activates a whole circle of people… It can affect another guy, another guy,” Gray said. “This program is so dope because it could actually help change the whole culture.”

And a culture change is exactly what’s needed when talking about healthy relationships and sexual assault. A national study commissioned by Stop Street Harassment in January 2018 looked at a broad range of behaviors — including verbal assault, unwelcome touching, and online harassment — and reported that 81 percent of women and 43 percent of men said they had experienced some form of sexual harassment or assault during their lifetimes.

“We have to react and respond lovingly to those who have been harmed by violence, but the prevention piece is really critical if we want to stop the tide of violence that we see,” said Carmen Pitre, president and CEO of the Sojourner Family Peace Center, which is Wisconsin’s largest service provider for families dealing with domestic violence.

“We say ball is life,” Gray said. “I put the challenge to my guys: you can tie any situation back to basketball.” For example, being a great teammate requires a lot of the same qualities and behaviors as being a great friend or partner, he said.

Gray said he appreciates how the Coaching Boys Into Men curriculum uses the structure and principles of sports and teamwork to talk about real-life situations and get into big concepts such as healthy masculinity.

“Young people can get different ideas of what it means to be a man,” Gray said. “They think it’s all about being the tough guy. It’s not always about strength and toughness. It’s about accepting, sacrificing, supporting and working together.”

The coaches’ 12 lessons are on play sheets created by OVP featuring the curriculum made available by Futures Without Violence. “Time-out” cards are scenarios for how to intervene and use an inappropriate behavior as a teachable moment. While using sports-centric language, the curriculum delves into topics including insulting language, taking personal responsibility for actions, understanding consent, communicating boundaries, online harassment, relationship abuse and promoting equality.

After Kidd and Moore hosted two training sessions, coaches across the city are beginning to implement the curriculum into their practices once a week. Their play sheets include information about websites and hotlines, and Kidd will be visiting each site and checking in with coaches throughout the season to see if they need more support. Players and coaches take surveys before, during and after the season, and at the end of the program, participants will sign a pledge to affirm their commitment to what they’ve learned.

Kidd said that her goal for the pilot is to get young people to think more about their choices and to be equipped with information and support that they didn’t have before, to hopefully expand the program to other coaches, and to create a counterpart program for young women.

“With this program, it really dissects situations and uses critical thinking as a solution,” she said.

Gray said he hopes it gives a platform for his players to talk about and see how some situations they might think are funny or normal are actually harmful, and that they feel equipped to have healthy relationships in all areas of their lives.

Though some of these conversations might be difficult to have, Gray said that he feels that as a young male role model, he is in an important position to be the one to have them with his team. He recalled the positive and lasting impacts that his own coaches have had on him throughout his life.

“Having that important male figure to talk to about these issues can change everything,” he said. “I know if they’re looking to anybody right now, it’s me.”

He said that he’s “very close” with his team. “They can actually relate to me,” he said. “I dress how they dress. I listen to a lot of the same music as them.”

Futures Without Violence reported that “coaches consistently rate as the #1 positive influence on today’s youth.”

“When you have coaches having these conversations with them, they tend to receive it better because it’s not coming from a parent,” Kidd said. “For a lot of our young people, coaches are a mentor, a father figure, a big brother, an uncle.”

Evidence shows that this strategy is effective. In 2012, the Center for Disease Control completed a three-year evaluation of the Coaching Boys into Men program in Sacramento, California. The study found that athletes who participated in Coaching Boys into Men were significantly less likely to perpetrate abuse, and significantly more likely to positively intervene when witnessing instances of abusive or disrespectful behaviors among peers.

Pitre said Coaching Boys into Men creates space for new groups of people to participate in the work of ending violence.

“This issue is about all of us and the kind of quality of community that we want to live in,” she said. “We all have to participate in preventing the kinds of things we don’t want to see or happen to people here.”

From years of experience working to end domestic violence and sexual assault, she said she knows it’s not going to be easy to broach some of these tough topics with young people.

“These conversations are difficult for all of us,” she said. “Human relationships are complicated, and we are always evolving.” Pitre said that all adults, especially pastors, doctors, teachers and parents, need to become more comfortable talking about these topics and serving as role models.

Gray said he’s looking forward to the process. “I’m excited to be able to touch on a topic and see it come into play on the court; but this season, even more so off the court.”