You are here: Home / Neighborhoods / North / Amani / Homeless Sanctuary encourages individuals to find their worth, dignity
Share this... 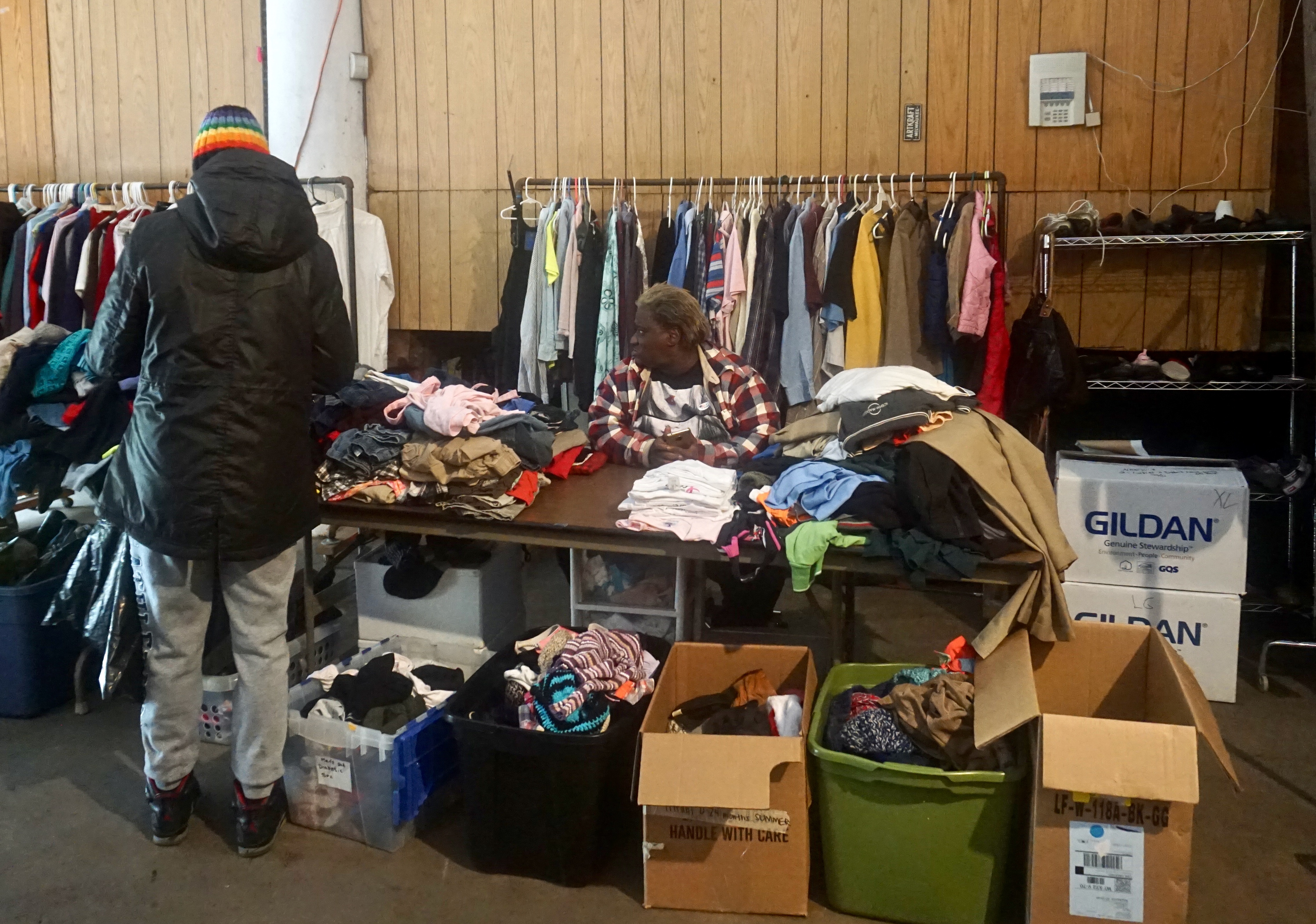 Men, women and children dart in from the cold into the dimly lit and drafty back room of the MacCanon Brown Homeless Sanctuary. They gather in a prayer circle to give thanks and hear the rules before they are allowed to shop for produce, clothing and furniture — all free of charge.

Charles Preston said he has been coming once or twice a week since the sanctuary opened in June 2017. He said he enjoys getting produce such as bananas, apples and oranges twice a week.

Latoya Tompkin, who lives on East Burleigh Street, gets fresh produce and clothes from the sanctuary. She said she was raised on hand-me-downs, and as she grew up she realized that everybody needs some sort of help.

The sanctuary at 24th and Center Street is housed in a five-story old furnace factory built in 1927. Sister MacCanon Brown said she is restoring the 35,000-square-foot building floor by floor. “We invite people to support the construction,” she said, adding that recently a donor replaced the roof.

A “doorway” ministry, in which people come to the back door to get supplies, is open every Tuesday and Thursday. Brown said the sanctuary is “gearing up to move the doorway ministry into a heated area on the front part of the first floor with a bathroom.” She added she is hoping that work will be underway within three months. When construction on the building is completed, it will house an emergency warming center, a medical center, employment help, aquaponics gardening and agriculture.

Brown, a member of the Sisters for Christian Community, was one of the founders of Repairers of the Breach, a nonprofit that provides daytime refuge for the homeless. She is now president and CEO of the homeless sanctuary. 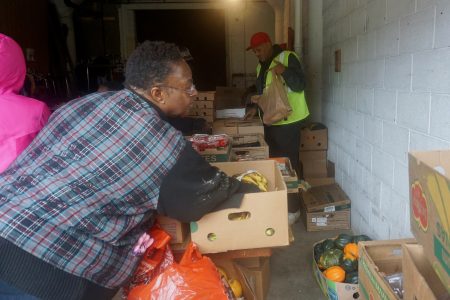 Kattina Brown, a volunteer at the sanctuary, packs up fresh produce from Feeding America. (Photo by Sarah Lipo)

The sanctuary does not usually offer shelter at night, but Brown said she plans to put pallets in during the cold winter months.

The sanctuary provides a place for people to go during the day “to work on their lives,” she noted, adding, “We are not solving the problem of where people sleep at night.”

“We provide a daytime refugee center, where they can focus and get … access to resources” such as employment help and medical care, Brown said.

She pointed out that homelessness is a bigger issue than providing a place to stay at night. “Wherever you sleep, wherever you wake up in the morning, you’re still homeless.”

The sanctuary benefits residents of the Amani neighborhood, which has a 48 percent poverty rate and is a food desert, according to the sanctuary website. Amani is in the 53206 ZIP code, which is ranked third for requests for housing and shelter in Wisconsin in the last year, according to 2-1-1 Wisconsin.

Sanctuary volunteer Kattina Brown said that even though she has been living in the neighborhood for a long time, “I didn’t really realize how many people needed help.”

“Sometimes when sandwiches don’t come in, you can see the hurt look on their face because they were depending on those sandwiches,” she added.

The sanctuary usually gets food from Feeding America of Eastern Wisconsin, a leading hunger-relief organization that supplies food banks. University School of Milwaukee also provides food and has a garden that helps feed the Amani neighborhood.

While Sister MacCanon Brown has 26 years of experience working with the homeless population, she said she cannot fix people. “Come in our door when you’re ready to make changes in your lives,” she tells them.

“In my experience, many, many homeless people have checked out of society because they think nobody cares, or because of trauma,” she said.

Volunteer Steve Connor said individuals who need help come into the shelter. “I truly respect what MacCanon Brown is doing. To me, she is another Mother Teresa,” Connor said.

He added that individuals are falling through the cracks, and there are needs in many Milwaukee neighborhoods that are not being addressed by public programs.

Connie Moorer, a sanctuary volunteer, said she thinks its mission is important for the entire community. “Sister MacCanon’s philosophy is that we don’t take care of people, we just give them a hand up,” she said.

“Sometimes you hug people and you know people haven’t had a hug in a while,” Moorer added.

She volunteers on Sunday and Friday, sorting clothing. When she is available on Tuesday and Thursdays, she helps out at the doorway ministry.

“When we come out with kindness, and give them free food, fresh produce, household items, bikes,” Moorer said, “the people are just amazed it is free and they are surprised it is given out in kindness.”