You are here: Home / Home / Carousel / Participants invest in future with financial education program
Share this... 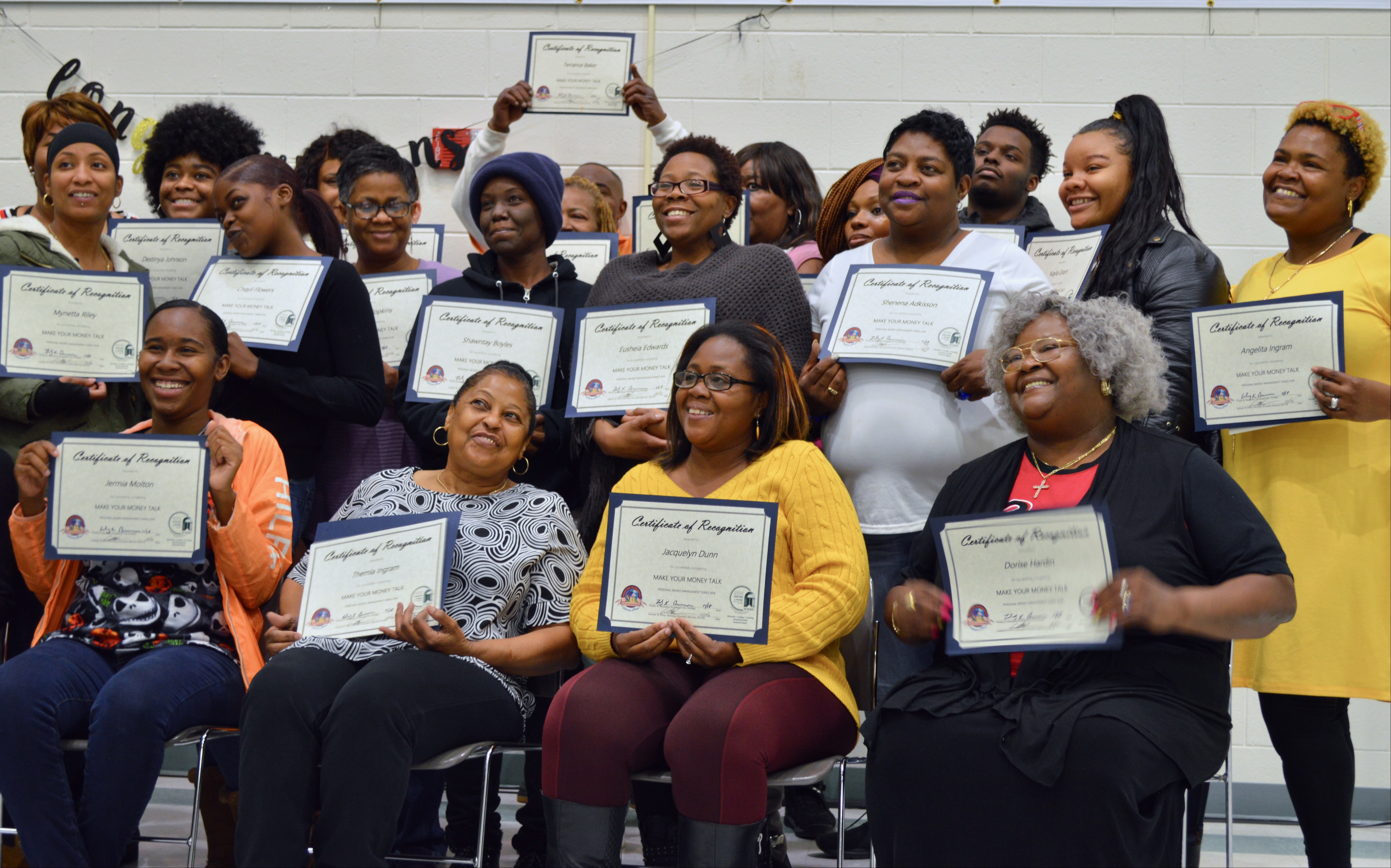 Jasmine Rolland was attending Concordia University, running out of financial aid and raising two children when she decided to take a semester off and enroll in a financial education program. Rolland graduated from the program, “Make Your Money Talk,” in 2016 and used funds she received in 2017 from a match savings account to go toward her education.

She recently spoke to new graduates at the program’s 2018 graduation ceremony, held at the Housing Authority of the City of Milwaukee (HACM) Community Services building, 650 W. Reservoir Ave. There were 150 graduates this year.

“To make a long story short, I used the funds to pay a semester of my tuition, which was really helpful because I didn’t have any money,” Rolland said from the podium.

She was greeted by loud applause from the crowd when she announced that she is now a registered nurse at Froedtert Hospital.

Make Your Money Talk, which began in 2004, is a partnership between HACM and the Wisconsin Women’s Business Initiative Corp. (WWBIC). Instructors teach about personal finances, including creating household budgets, improving credit scores and identifying “spending leaks” in funds and savings.

“It opens doors for our residents to better opportunities and to be able to increase their self-sufficiency and gain access to things they normally wouldn’t be able to,” said Amy Hall, communications coordinator at HACM. 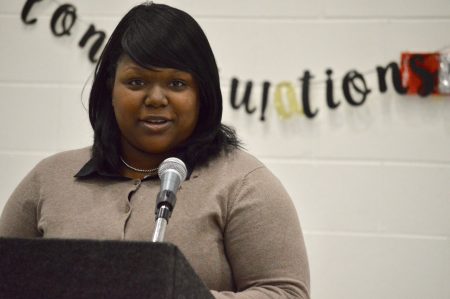 Jasmine Rolland, a 2016 participant in Make Your Money Talk, congratulates new graduates and shares her own success story. (Photo by Analise Pruni)

Participants who reside in HACM’s public housing or receive rent assistance can open an Individual Development Account or IDA, in which their savings are matched from a fund supplied by HACM.

IDAs can be used for purchasing a home, paying off debt, funding education, opening a business or buying or repairing a vehicle. In total, 147 graduates financed a home, 81 put funds toward their education, 67 toward a business, 18 toward a vehicle and 22 to pay off debt.

Kayla Grant, 20, is one of the new graduates. She attends MATC for business management and would like to apply her new finance skills toward opening a “beauty bar” salon franchise that would begin in her neighborhood on the North Side.

“The best thing I think I learned from the program is that you define your own success,” Grant said. “Nobody can really make that for you; it’s up to you to win or lose.”

She said if she could teach them only one thing, it would be to “face your finances.” She found that some people are afraid to check to see how much money they have in the bank.

“It’s about being transparent and willing to do the work,” Harvey said.

Harvey and others involved in the program emphasized small, everyday tips for managing finances. They include understanding “needs versus wants” and avoiding the word “budget” in favor of “savings and spending plans.”

Amber Miller, senior project director at WWBIC, said that something as small as making coffee at home, rather than purchasing it at McDonald’s, can make a big difference. “Now they can put that dollar in their savings account and that’s huge,” she said.

Antonio Pérez, secretary-executive director of HACM, said that the program isn’t successful because of a “Eureka!” moment organizers had about financial education. It is successful, he said, because of the strength of the partnership between HACM and WWBIC and the perseverance of the program’s participants.