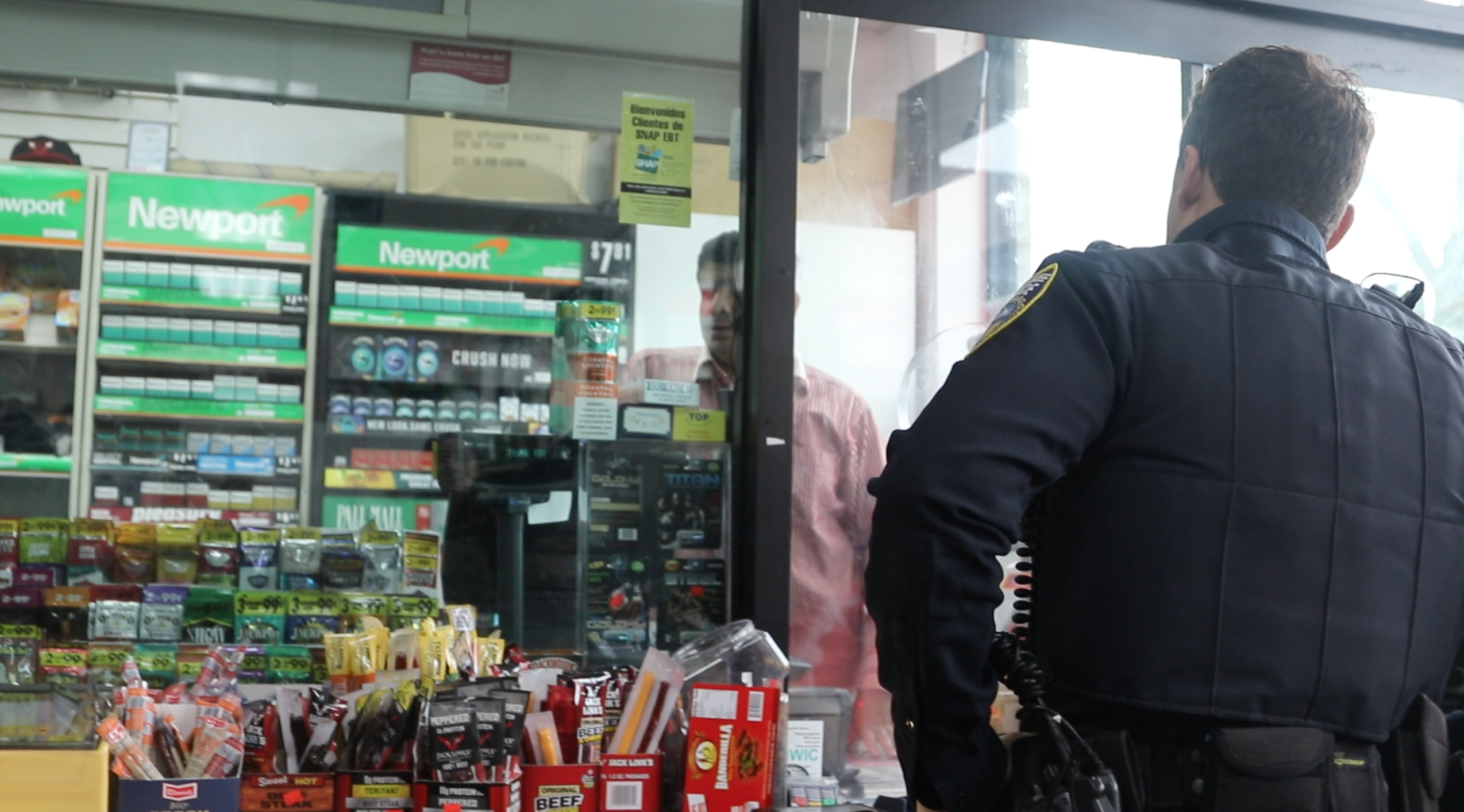 A middle-aged man wearing a blue plaid flannel shirt runs out of Mr. Churros, a restaurant and bakery in Clarke Square, to catch up with two police officers out walking their beat.

The man inquired how to submit an open records request, according to Jose Acevedo, community liaison officer in District 2. The resident walked away from the conversation with Acevedo with an address and phone number.

This type of interaction between community members and police officers is increasingly common in Clarke Square since a new beat patrol initiative began about three months ago.

The officers have been walking and biking in South Side neighborhoods from 11 a.m. to 7 p.m. since the initiative was launched on Oct. 7 by aldermen Bob Donovan and José Pérez and Milwaukee Police Department District 2 Capt. Alex Ramirez. Beat patrols are intended to build personal relationships between the police and community members.

“What I love about the initiative is that it allows officers and residents to engage in an intimate setting where trust is built,” said Ramirez.

On a recent Tuesday afternoon, Acevedo and Officer Matthew Diener went about their daily routine checking up on vacant houses and engaging with residents and business owners.

When Diener stepped out of the squad car at their first vacant house check, he immediately called District 2 to send someone to clean up the garbage that filled the alley. 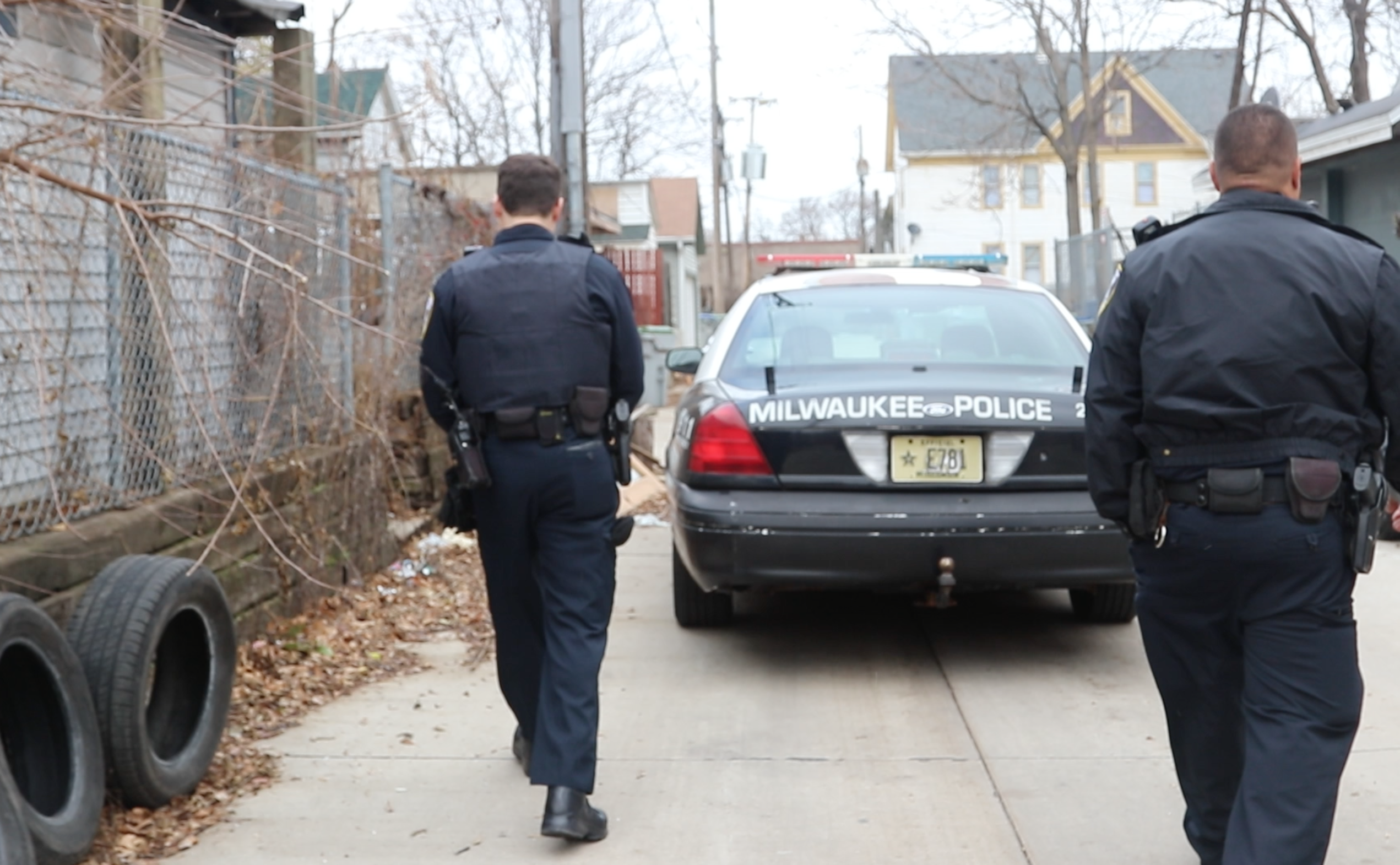 Officer Matthew Diener and Community Liaison Officer Jose Acevedo walk through an alley in Clarke Square to check on vacant houses before they head to talk to business owners. (Photo by Madison Marx)

Throughout the afternoon, Diener and Acevedo visited three vacant houses. Discarded needles and beer bottles lay in the backyards. Diener explained that prostitutes and homeless individuals often seek out the empty buildings.

Clarke Square residents would like to see the problems of prostitution, drugs and related crime addressed, according to a recent article published by Milwaukee Neighborhood News Service. Ongoing major construction on Greenfield Avenue during the summer pushed these crimes to other parts of the neighborhood, according to Diener. However, after construction wound down on Greenfield Avenue, District 2 officers are working to ensure that criminal activities do not start back up on the street.

Jorge Lopez, co-owner of Lopez Bakery & Restaurant, 1100 W. Historic Mitchell St., said that officers often stop by the restaurant for an authentic Mexican meal. While dining, they check in with Lopez and make sure that everything is going smoothly.

“It does help having a cop stop in and say hi. It gives a sense of security,” said Lopez, co-owner of the business with his wife, Cindy Lopez.

The couple believe that community policing allows officers the opportunity to build relationships with business owners and residents. However, Jorge Lopez added that it would be nice to see more beat cops in the neighborhood.

Ishwor Ghimire, who works at the Kwik Stop on National Avenue, said that before the beat cop initiative he didn’t see any cops. Now, officers stop by Ghimire’s store two to three times a day.

“I’d say we have some of the most engaged residents as far as what’s going on in their community,” said Diener.

Historically, police officers have always patrolled Greenfield, National and Lincoln avenues, according to Diener. During the last 10 years, the department has shrunk, resulting in officers having to cover more area, he said. With the beat initiative, a set of officers has been assigned to neighborhoods such as Clarke Square and Walker Square.

“Community policing has the possibility to work if police see community members as citizens and not criminals,” Smith said. He added that for community policing to be successful there has to be input from residents on what policing should look like.

“It is important for police to live in the neighborhood,” said Smith. Police officers and other city workers are no longer bound by a residency requirement, which ended in 2016.

Last winter, Diener was driving around the Clarke Square neighborhood when he got a flat tire. As Diener and his colleague were changing the tire, a resident emerged from his house with several family members to help, and three containers of tacos.

“This experience goes to show how District 2 works,” said Diener.