You are here: Home / Home / Carousel / Summit aims to prevent youth from being exploited, trafficked
Share this... 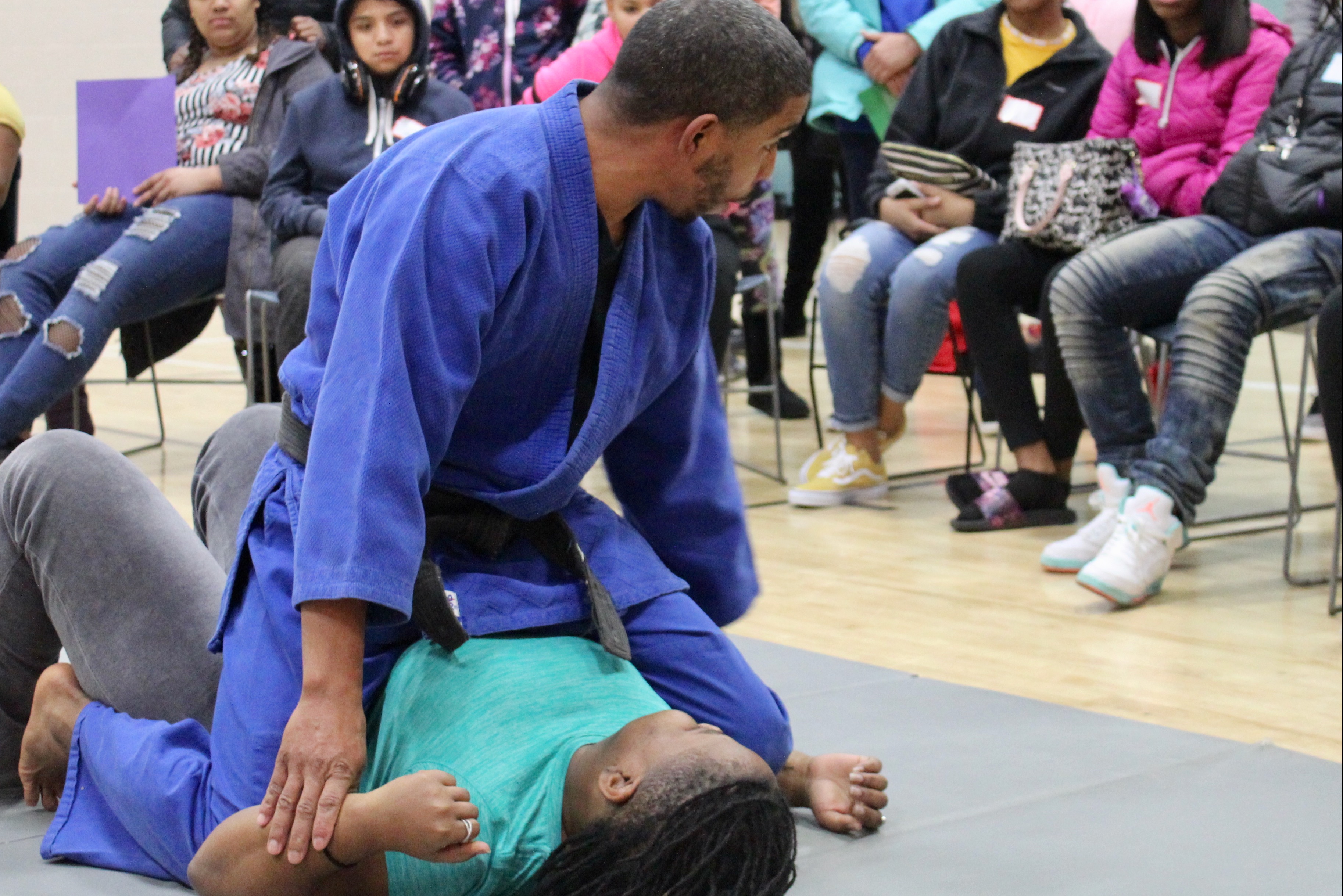 A 12-year-old girl with short, curly hair and a yellow graphic tee was pinned down by a grown man twice her size, unable to move.

She looked the man in the eye, carefully maneuvered and managed to throw him off of her, safely rolling away.

Nearby, a 17-year-old with a slicked back high ponytail and a bright pink hoodie leaned forward, watching intently.

The scene was not an actual attack, but rather a self-defense training session led by Fred Coleman of Studio 69. The session was part of the 3rd Annual Stay Out the Game 101 Youth Summit for Human Trafficking Prevention and Awareness on Saturday at the North Side YMCA.

Chandra Cooper, the founder and president of Grateful Girls, a nonprofit that provides services for young women who have been sex-trafficked, started the summit three years ago as a way to equip local youth with knowledge about sex trafficking so they can protect themselves and their peers. About 30 middle and high school age youth, girls and boys, attended the event.

“It’s cool because it actually gives teenagers and children an opportunity to learn how to defend themselves, how to stay safe, and how to keep themselves from being in dangerous situations,” said the girl in the pink hoodie. “It gives an opportunity for youth to open up to people and find new resources to go to and express what they’re going through.” 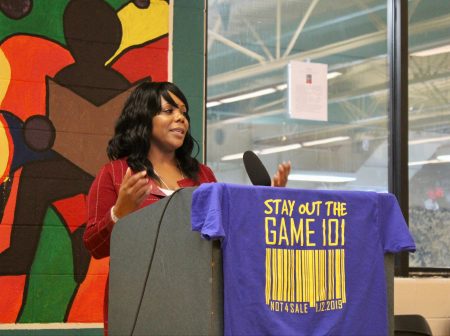 She said she came with other girls who she lives with in a group home. The high school junior moved into the group home after experiencing abuse growing up.

“I’m going through things in my life that aren’t always easy to open up and talk about,” she said. “Having different resources and trusting adults, I think that’s good and important.” The summit connected youth to organizations that provide support services.

In Wisconsin, human trafficking is defined as any situation “in which a commercial sex act is induced by force, fraud, or coercion, or in which the person induced to perform such act has not attained 18 years of age.”

Dana World-Patterson, chair of the Human Trafficking Task Force of Greater Milwaukee, said that the term “human trafficking” doesn’t always resonate with youth who are at risk of being exploited.

“The street doesn’t use those terms,” she said. “But when we talk about it, they understand that someone taking advantage of you is not good, and when you don’t feel your best, that’s when people can do that.”

“When you’re vulnerable, it’s important to be very cognizant that that’s a time you can be manipulated,” said World-Patterson, who led a workshop at the summit to help attendees identify the signs of trafficking.

According to a report released in 2018 by the Milwaukee Homicide Review Commission, 340 individuals ages 25 and under were confirmed or believed to be victims of sex trafficking in Milwaukee between Jan. 1, 2013 and Dec. 31, 2016. Those numbers are most likely low because the data was limited to Milwaukee police reports, and sex trafficking is known to be an underreported crime.

The majority of trafficking victims reported were female, African-American and had previously interacted with MPD through an incident such as sexual assault, battery, domestic violence, child abuse, drug crimes or missing reports.

A follow-up report indicated that of those who had been trafficked and had previously been reported missing, a majority had been in an “out of home care” (OHC) placement such as a group home.

The report recommended offering prevention programs in schools similar to those offered to prevent drug use or bullying.

“I just hope that they take away vital information of knowing what human trafficking is,” she said. “We want to give them the tools that they need to identify the signs of trafficking, as well as what healthy relationships look like.”

In addition to the self-defense class, the summit included sessions on personal safety, anger management, positive relationships and safe dating. April Bentley, a sex trafficking survivor who now runs the nonprofit Rubies delivered the keynote speech. Bentley told her story of being manipulated into selling sex at the age of 14 after a childhood of neglect and abuse. She told the audience members that there are ways to find love and support, even when they might feel broken or desperate.

At the end of the day, Cooper asked attendees what they learned, and shouts came from all over the room.

“Be careful around strangers!”