You are here: Home / Home / Carousel / ‘Read-in’ makes black history come alive through the power of poetry, prose
Share this... 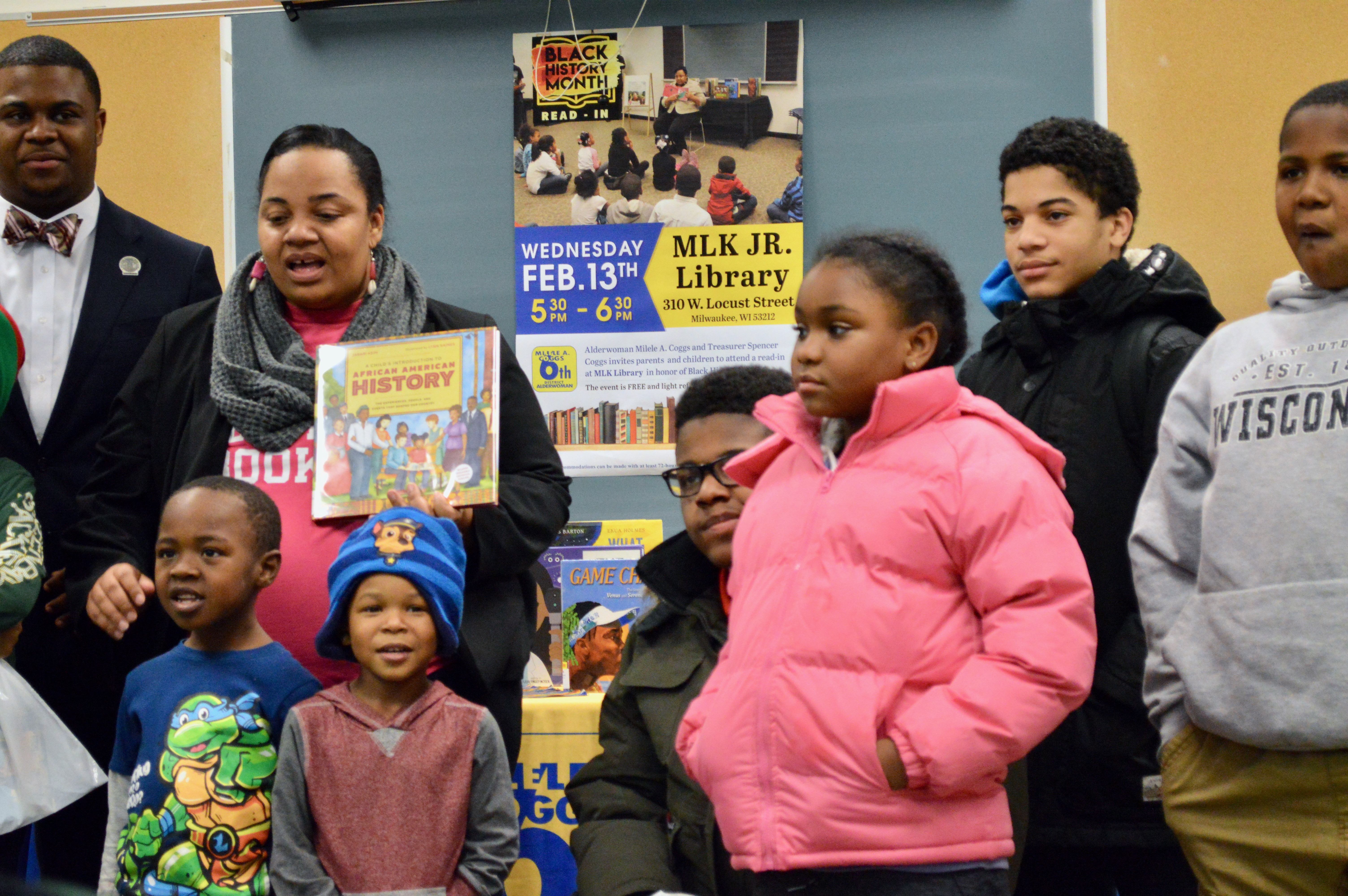 Rep. Kalan Haywood and Ald. Milele Coggs show the next generation the power of poetry during the Black History Month Read-in at the Milwaukee Public Library MLK branch. (Photo by Analise Pruni)

When Leonard Glover brought his two children to the Martin Luther King Library in the Harambee neighborhood, he accidentally wandered into the fifth-annual Black History Month Read-in.

“Let’s go on in and look, get a little history and learn something,” Glover remembers telling his kids.

Speakers read excerpts or poems aloud from books written by African-Americans about African-Americans, such as Maya Angelou’s poem “Caged Bird,” and young people in the room were then asked to comment on what they meant. One young audience member interpreted Langston Hughes’ piece “I, Too” and said it was about what it means to be an American.

“Did you know that people have the ability to make history every single day?” Coggs asked. “In front of us today for your first reader, you have a young man who has made history right here in Wisconsin who is from Milwaukee.”

She was talking about Kalan Haywood, who became the youngest state representative in Wisconsin’s history when he won office in 2018 at age 19.

“I’m going to read, but I get a little nervous reading books in front of people,” Haywood said.

He read Hughes’ “I, Too,” which begins “I, too, sing America. I am the darker brother…” 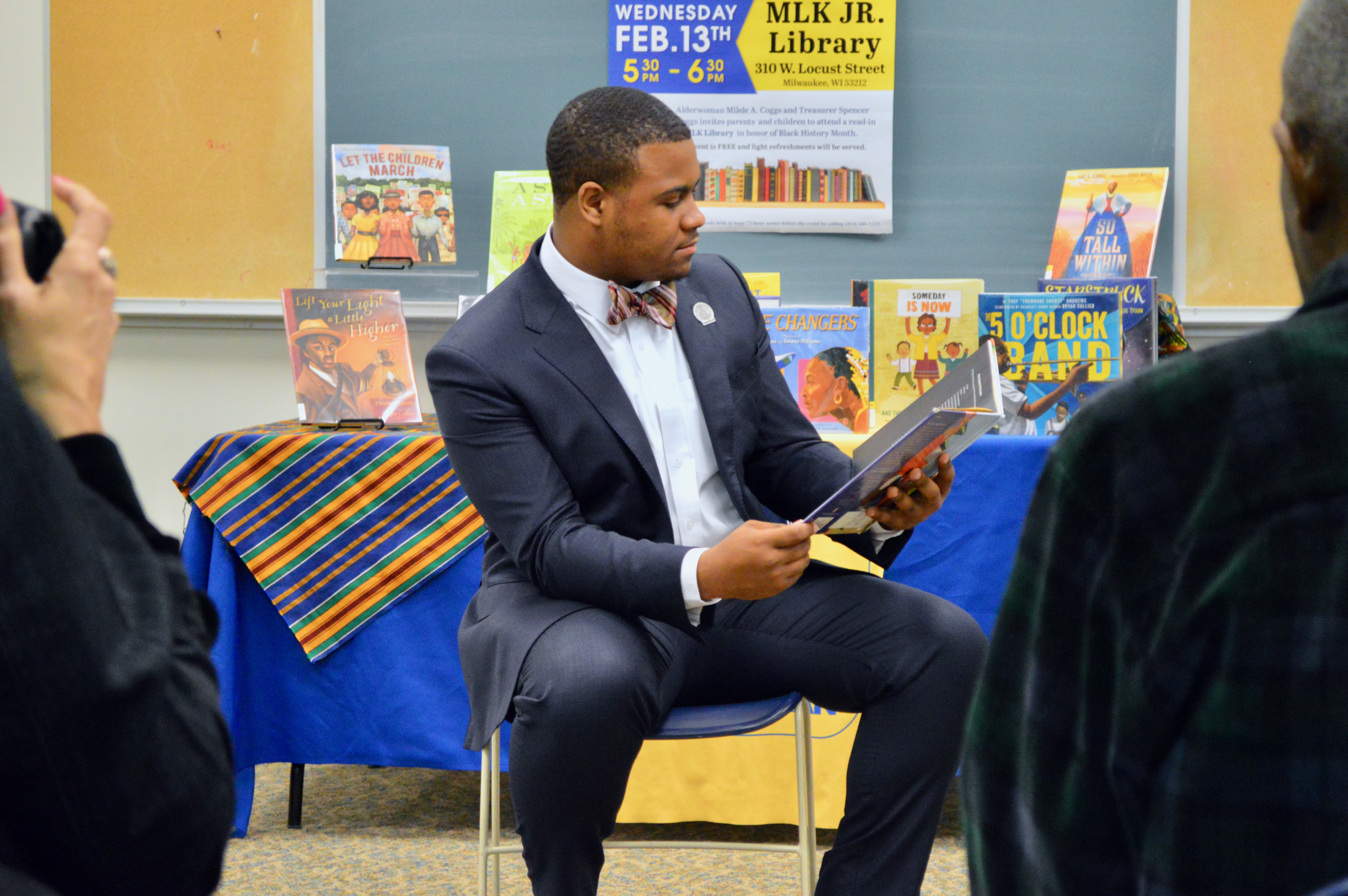 Rep. Kalan Haywood reads “I, Too,” a poem by African-American writer Langston Hughes, to children and their families. (Photo by Analise Pruni)

Haywood said he tries to come to the event every year. He added that reading is the key to success in educating students about Black History Month.

“Coming out and being a part of sharing not only what I’ve done but also feeding back into the community and the children and their future is always important,” Haywood said.

Though Glover had heard of Haywood and Coggs, he had not met them before the event. He said it is good for his children to see examples of role models in the community.

A Q&A at the end quizzed the children on some of the important people in black history that they had discussed.

Coggs asked them who 4th Street was renamed after. When a child correctly answered “Vel Phillips,” they received a bag of “city swag” from Coggs. Phillips was the first African-American woman to serve on Milwaukee’s Common Council and to become a judge in Wisconsin.

Coggs said she “grew up” in MLK Library and was inspired to begin the Black History Month Read-in by her love of literature.

“I’m always thinking of ways to bring young people into the library so that they can be touched and influenced as much by the library as I was as a kid,” Coggs said.

At the end of the evening, the youth and community leaders formed a circle and sang in unison: