You are here: Home / News / Arts and Recreation / This homework is music to MPS students’ ears
Share this...

On any given day, it is not unusual to find students pulling bows across strings, putting mouthpieces on clarinets or pressing down the keys of saxophones in the orchestra room at the Golda Meir School at 227 W. Pleasant St.

But taking their instruments home is another story.

Yet 20 students from the third to the 11th grade were able to do so earlier this month, thanks to the Wisconsin Conservatory of Music, which has four campuses, including one on the East Side.

The conservatory partnered with Badger State Instrument Repair in Elkhorn and Music & Arts in Muskego to have the donated instruments repaired and then presented to the students, many of whom could previously only rent or borrow an instrument.

“I grew up in Milwaukee playing violin, and I remember the first day I got my first violin,” Shalisa Kline Ugaz, executive vice president of the conservatory, told the children. She said she was almost 8 years old when she borrowed her first violin because she didn’t have one of her own until she was 12. 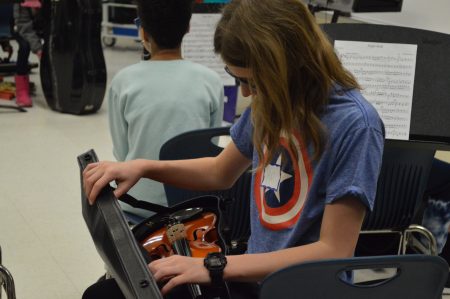 Sixth-grader Sam Freund opens and inspects a violin that was donated in a community instrument drive and now belongs to him. (Photo by Analise Pruni)

“One of the challenges is having your instrument at school and you don’t have it to practice at home,” Kline Ugaz said. “We don’t want them sitting under your bed. I know that’s a nice place to store them, but we want you to be playing it every day.”

Ijoister Harris is the orchestra director at the school and was given his first violin as a child as well. He grew up in Milwaukee, attended MPS and also the Wisconsin Conservatory of Music during his youth and has been teaching at MPS for 28 years.

“A lot of them [students] had the dilemma where they could not have an instrument at home,” Harris said. “Renting it can be costly, so to have an instrument that they now own with the conservatory’s assistance is absolutely incredible.”

Eleven-year-old Sam Freund wants to be a computer engineer when he grows up, but he also likes playing the violin as a hobby and received one to take home that day.

“I like to play whatever Mr. Harris gives me,” Freund said. “Outside of school I usually listen to rock.”

Woodwinds, flutes, strings and brass instruments were handed to the children who waited patiently for the go-ahead to try them out. Sixth-grader Michael Holman put his mouth up to his new saxophone and blew outward while he pressed down the keys.

When his father, Phil, was a child, he took music lessons at the conservatory.

“I had the opportunity growing up, but I didn’t really value it,” Phil Holman said. “But we’ve exposed him [Michael] to it and, as I got older, I understood the value.”

Karen Herzog, director of grants and communications for the conservatory, said some of the donated instruments included a violin that was played by a World War II soldier in Trinidad and another that was more than 100 years old. There was also a saxophone that was played for audiences at the 1964 World Fair, alongside clarinets, cellos, flutes, bassoons, French horns and oboes with unknown pasts.

The second community-wide instrument drive is planned for Oct. 5.

“The Wisconsin Conservatory of Music’s mission is to make sure that everyone who wants to play an instrument can take lessons and they can do that,” Kline Ugaz said.