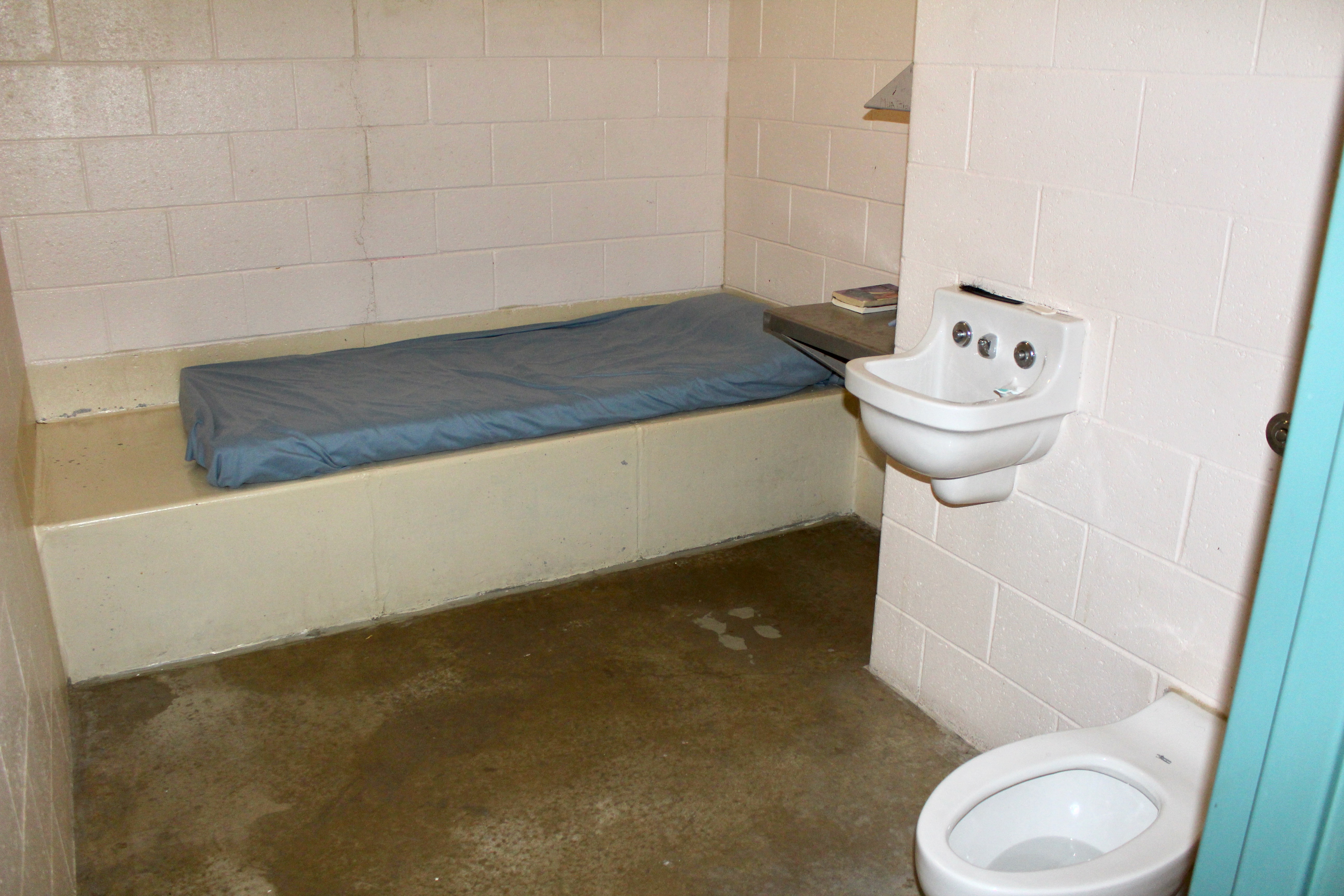 Two youths housed at the Vel R. Phillips Youth Detention Center spoke with a reporter about the harsh realities of life in confinement. (Photo by Allison Dikanovic)

Editor’s note: Milwaukee Neighborhood News Service has not published the names of youth in the Vel R. Phillips Youth Detention Center in order to protect and respect the youths’ privacy.

It’s Friday night, and two teenage girls are getting ready for their evening plans. They each put on a maroon crew neck sweatshirt to match their baggy khaki pants and slide on shiny black sandals over their gray socks. Neither is wearing makeup. Their hair is not styled.

The girls open the large, teal metal doors and emerge from their concrete-floored rooms to greet their friend who is coming to hang out.

Visitors are limited at the Vel R. Phillips Youth Detention Center, and friends aren’t typically allowed unless they are of a certain age and get special permission by a child’s case worker to be considered family who can visit at specified hours.

The guest is Claudine O’Leary, not a peer, but rather a full-fledged adult. She’s a volunteer with cotton candy pink hair and a gentle smile who has worked professionally with vulnerable youth for more than 25 years and runs her own consulting business called Rethink Resources.

Similar to all high school students that I have ever met, after saying hello, the girls quickly asked O’Leary if she had brought any snacks.

Unlike most high school students I know, they were equally as excited about the chilled bottled water that she brought as they were about the hot chips. They said the tap water from their rooms was lukewarm and “stale.”

The cream cinder block walls were largely empty, besides a few maps and lists of rules. A pile of Bibles sat stacked in the corner. An open Monopoly board sprawled out on one of the tables. In the center of the room a large desk towered where a correctional officer sat. Earlier that evening, she was playing board games with one of the girls.

Each Friday night, O’Leary facilitates a girls’ group called Real Talk, and one week this winter, she invited me to join her.

O’Leary said that many of the girls stay in detention for several weeks, and sometimes months. The Wauwatosa School District provides education, but otherwise programming is sparse. She said that numbers of youths in detention are lower in the winter months, when youths can more easily avoid police contact. 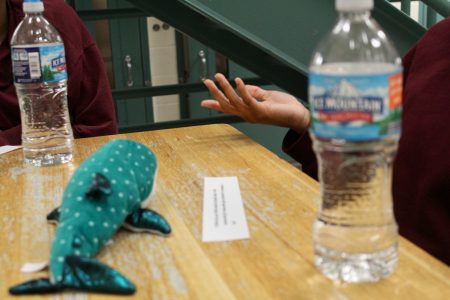 Two girls staying at the Vel R. Phillips Youth Detention Center passed the plush talking piece back and forth as they shared their thoughts on youth justice reform. (Photo by Allison Dikanovic)

O’Leary stays in contact with the girls after they leave detention and said she is often one of the most consistent sources of support in the girls’ lives as they move through the youth justice system and have changing case workers, judges and probation officers. She said she personally knows nearly all of the young women at Copper Lake youth prison, as well as girls who have been placed in group homes and residential treatment centers throughout the state, and sometimes out of state.

One of the girls, who had recently celebrated her 16th birthday inside detention, showed me the few possessions she had in her room: a couple of romance novels and a slip of paper with O’Leary’s phone number on it.

As I’ve been reporting on the pending changes to the youth justice system in Milwaukee as lawmakers plan to close Lincoln Hills and Copper Lake, I have become increasingly curious about what the youth in the system want to see changed. O’Leary said that to her knowledge, none of the young people in detention has been consulted in the reform process, and when she invited me to join her group, I jumped at the chance.

Though the voices of these two girls, one 15 years old and the other 16, are not representative of all of Milwaukee’s youths in the system, they offer a glimpse into perspectives we don’t often hear, and I think it’s important to share them with you, our readers.

O’Leary facilitated a discussion, passing around a plush sea creature as a talking piece.

This is what the girls had to say about the state of the youth justice system and changes they would like to see in their own words:

“It’s too far out. I’d rather be here knowing that my mama is safe and she’s at home, not too far from here.”

“When you put females all in one big facility like that. It doesn’t turn out right.”

“When there are a lot of kids in one place, and they’re locked in, you just get angry. It doesn’t work out, especially when people know each other and might get into fights.”

On building a new facility:

On their involvement in the youth justice system:

“I feel like for me, once you’re in the system, that’s it. It’s hard. You’re always going to have something.”

“Whatever you do, they’re just going to put you in a harder situation. It’s not going to get better.”

“I just felt trapped. Once I started being in here—this is my third time in here—and I’ve been coming in and out of here since August, and it’s February. Most of the time, it was my fault. The first and second times, those were my fault, but this time, I didn’t even do anything. I had a warrant that I didn’t know of from August.”

“My first case, I was a party to a crime. They put me on a bracelet and sent me to a group home. I wasn’t having any problems with my mama. I wanted to go home with my mother, but that’s what they did, and I just feel like ever since then, it’s been downhill, because for me, I just don’t like people tracking me like that. I had a big ankle monitor on my leg. I felt like a dog. I had to charge it. I had to make sure it didn’t get wet in the shower.”

“It can’t be wet because they’ll charge you for that, and then you’ll come back here (to detention) because they’re going to think that you’re tampering with it. You can take a shower, but you can’t take a bath. You can’t swim in pools, none of that.”

“You have to sit there for two hours and 45 minutes every day for it to charge. You have to charge it, or it’s a violation, and three violations get you back in here for 10 days.”

“You get violations for everything, if your bracelet is dead, if you’re court-ordered to go to school, you can’t leave school property, not even to go to McDonald’s or the gas station or something.”

“The most embarrassing thing about it that is makes the metal detectors go off at school. That’s not cute. It’s embarrassing. They pat you every time. You have to take your shoes off and everything just to get into school.”

On condition of detention, needed improvements and ideas for new facilities:

“Rather than sleeping on mats and stuff, we should have beds, not fancy beds, but we should be more comfortable.”

“They should improve the food. They should put more seasoning in the food. I never had tasteless meat until I came here.”

“We need better soap. I need the kind of soap that I use when I’m out. Switching soaps is not good for me or my skin.”

“They should let us listen to music or have a radio in our rooms. That’s really calming for me and helps me cope. A lot of people here are on sleep meds because they’re not used to being here. Maybe music would help.”

“They should let our parents bring in their phones, because it allows other people to visit you through Facetime. I would go crazy here if I didn’t have visitors.”

“I think they should have a therapist here to talk to kids.”

“I wish there were more activities. It would even help to have somebody to just draw or play cards with us or something.”

“It helps me to have somebody to talk to to tell me that it will be all right.”

“It is cold in the rooms. The blankets are thin and scratchy.”

“I would rather do a female MCAP, because they can get home passes and have a lot of groups and activities. If you’re a female and you have severe charges, they send you to Copper Lake.”

“There should be classes like how to do hair and different things that could become jobs or how we could get employed later.”

On group homes, and why young people run away from them:

“If you put me somewhere on 12th and Atkinson and I come home from school, they know it’s me. They need to stop putting me in places that I know. If you put me on 90th and Mill Road or something, I don’t know anything about that place, so I’m going to stay in the group home. It’d be safer for me than leaving, because I don’t know anything about that area.”

“It’s almost like they’re trying to see us fail by where they put us.”

“If you knew there are pimps next door, why would you keep me in the same environment?”

“I remember at one group home I was at, we had to duck because there was shooting… They’d say, go down, go down. You shouldn’t be used to that. You shouldn’t have to stay at a group home where they tell you to get down because people are shooting outside.”

“Put me somewhere with more supportive people around me, someone to look after me.”

On need for reform:

“Even if they’re not your kid, we should be treating everyone like they’re our own kids. If I were them, I would treat each kid like they were mine. Everybody would have respect. There would be no going back and forth about it.”

“We’re still kids, at the end of the day, and we’re not used to this. No matter how many times you come in here, you’re not going to be used to it.”