You are here: Home / Home / Carousel / ‘Some of these tribes are gone’: Class makes sure Native American youths never forget their rich heritage
Share this... 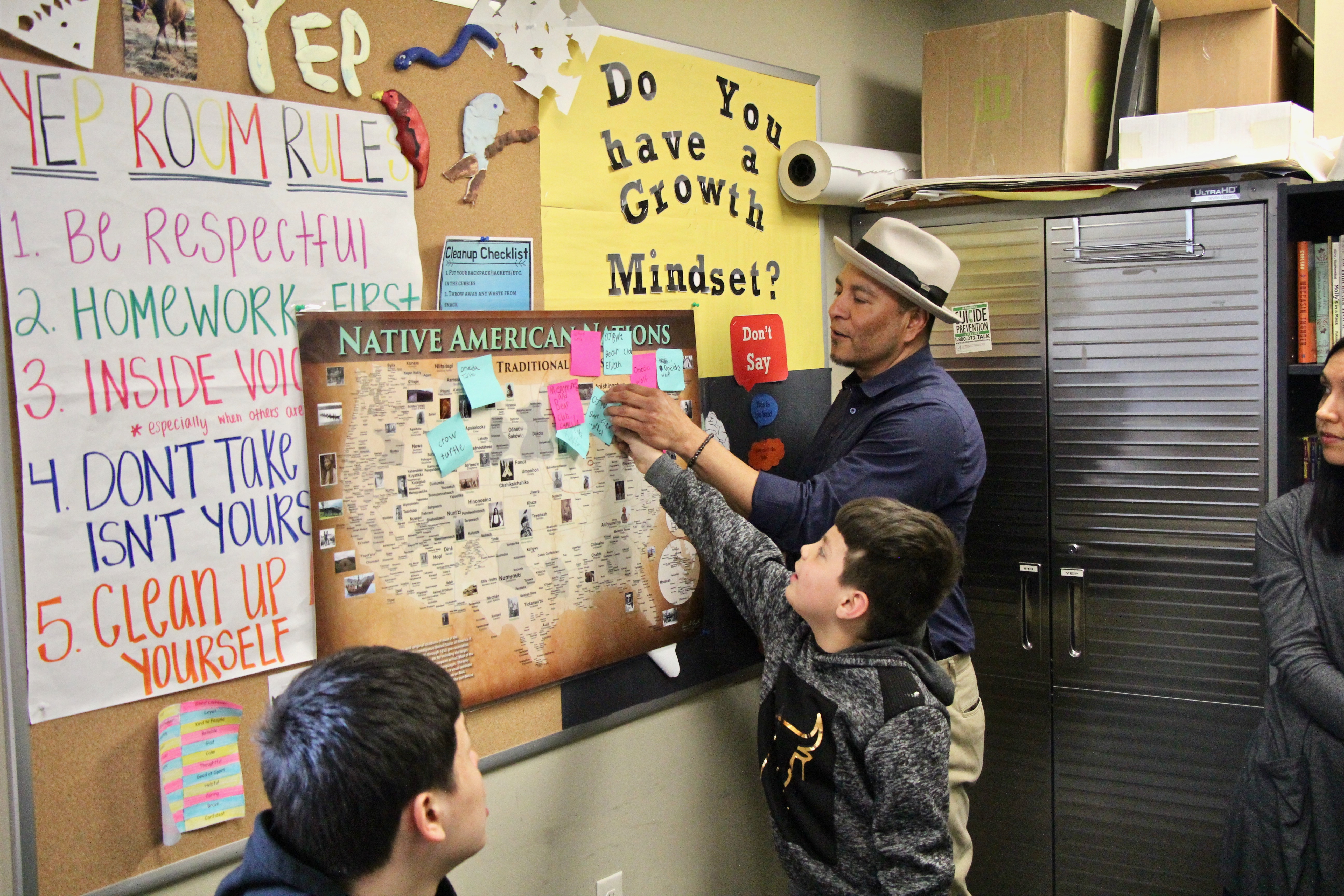 Brian Frejo, the center’s cultural coordinator, helps a student place his tribes’ names on the map. “Some of these tribes are gone,” Frejo tells the group. “The names that are on here are still alive. That’s you guys. That means your people survived to be here in Milwaukee.”

In the back of the classroom on the second floor of the Gerald L. Ignace Indian Health Center, a “Native American Nations Map” poster hangs on the wall.

Brian Frejo, cultural coordinator at the health center, 930 W. Historic Mitchell St., passes out Post-it notes to the dozen students sitting in a circle. He tells them to write  the names of their tribe or tribes and then gives them a simple task.

“Identify for yourself and for your family where on the map your people are from.”

One by one, students ages 7 and older walk to the poster with Post-its signed Ojibwe, Sioux, Oneida, Potawatomi and more in hand.

“Some of these tribes are gone,” Frejo said. “The names that are on here are still alive. That’s you guys. That means your people survived to be here in Milwaukee. You are the seventh generation.”

The center’s Youth Empowerment Program, which began in 2015, seeks to connect youths to their tribal history.

Students ranging from ages 7 to 18 attend the program after school Tuesdays and Thursdays to work on homework and participate in cultural activities.

Anne Egan-Waukau, vice chairwoman of the center’s Board of Directors, said the youth program helps to celebrate the students’ culture and “for those who don’t know, educate them on it.”

In addition, “kids are reconnecting and reidentifying with their tribal identity,” said Frejo, who is Pawnee and Seminole and teaches the youth culture classes. 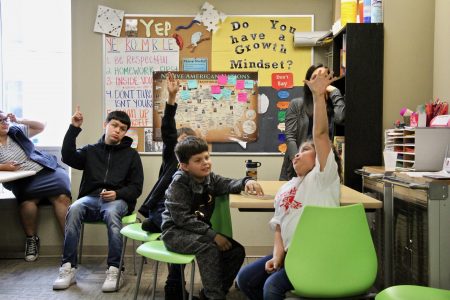 About a dozen students from schools in the Milwaukee area come to the program twice weekly. “Kids are reconnecting and reidentifying with their tribal identity,” says Brian Frejo, who is Pawnee and Seminole. (Photo by Bridget Fogarty)

A typical class begins with a talking circle, in which each student seated takes a moment to share their name, their tribes and how they are feeling on a scale of one to 10. About a dozen students from schools in the Milwaukee area come to the program twice weekly, and many participate in the summer program as well.

Frejo said although youths come from different schools, neighborhoods, tribes and backgrounds, they unite through their identities.

Having grown up in Oklahoma City and living in Milwaukee for the past two years, Frejo said bringing tribal culture and traditions to Central City neighborhoods strengthens a person’s pride and knowledge.

“If you’re grounded in your roots and culture, you can live anywhere,” Frejo said.

Rosita Gonzalez, 17 and a member of the Oneida tribe, has attended the center’s youth programming since its beginnings. She said that as one of three or four Native American students at her school, the health center’s after-school program allows her to connect with her tribal culture and traditions.

The Youth Empowerment Program also hosts monthly family dinner nights, which gives a space for Native families to gather as a community.

During one class, the group discussed how the words peers use every day derive from the languages of their ancestors.

Katy LaRoque, a youth support specialist and teacher at the center, described to the students how “Milwaukee,” for example, has Anishinaabe origins (the language of the Ojibwe, Odawa and Potawatami). “Mino-akking,” which translates to “good land,” praises the rich soil Milwaukee possesses.

Frejo said he hopes such teachings will continue to prompt students to make positive decisions, grounded in their culture.

As part of the seventh generation, “they’re succeeding, not just surviving,” he said.

The center’s 14th annual Red Shawl Gala on April 12 honored Gerald L. Ignace, a physician and co-founder of the health center, for his dedication to improving urban native health and resources. His son, Dr. Lyle Ignace, continues his father’s work as executive director at the health center. The Ignace family was awarded this year’s Alumni “Service to the Community Award” by Marquette University.