You are here: Home / News / Community / OPINION: The Bucks may have lost, but Milwaukee definitely won
Share this...

Dwayne Burtin, the deputy editor for digital at the Milwaukee Neighborhood News Service and a Milwaukee native, says The Bucks did something many thought was impossible: They brought all of the city together.

Winning sports teams have a way of bringing people together.

The recent thrilling NBA playoff run by our beloved Milwaukee Bucks — our most successful in 20 years — serves as a great example. The Deer District was bustling with activity and the large crowds were reflective of the diversity that can be found in our great city — which usually may be harder to spot. 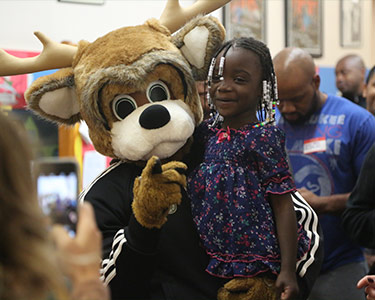 (Photo provided by the Milwaukee Bucks)

Milwaukee is recognized nationally as America’s most segregated major city. Over the past few years, reports have shown up in Huffington Post, NPR, USA Today and CNN, to name a few, documenting the issues of segregation and racial disparity looming over our otherwise very culturally diverse city.

Milwaukee Bucks starter Malcolm Brogdon was profiled in an interview with The Guardian, where he is quoted as saying: “Before I came to Milwaukee I’d heard the city was the most segregated in the country. I’d heard it was racist. When I got here it was extremely segregated. I’ve never lived in a city this segregated. Milwaukee’s very behind in terms of being progressive. There are things that need to change rapidly.”

Can the Bucks, and other local sports teams, be a catalyst in the city’s progression? It seems as if they can.

Although they were ousted from the playoffs after losing to the Toronto Raptors in six games, the Bucks rallied together fans of all ages, races and backgrounds, and they energized the spirit of our city.

If there is anything to be learned from this, it’s that if something as simple as winning at sports can cause people of different backgrounds to come together, then we probably aren’t all that far apart to begin with.

So where do we go from here?

I hope that future events in the Deer District continue to bridge audiences and draw large diverse crowds.

I also hope our local teams recognize the influence they have and take it as a challenge to create opportunities that bring people together, even when we aren’t knee deep in the playoffs.

We also have to do more ourselves. If we want the city to be better, we have to be better and not just for our local sports teams.

That being said, here’s to hoping the Brew Crew has a great postseason run this October.

Have any ideas? Share your thoughts in the comments.