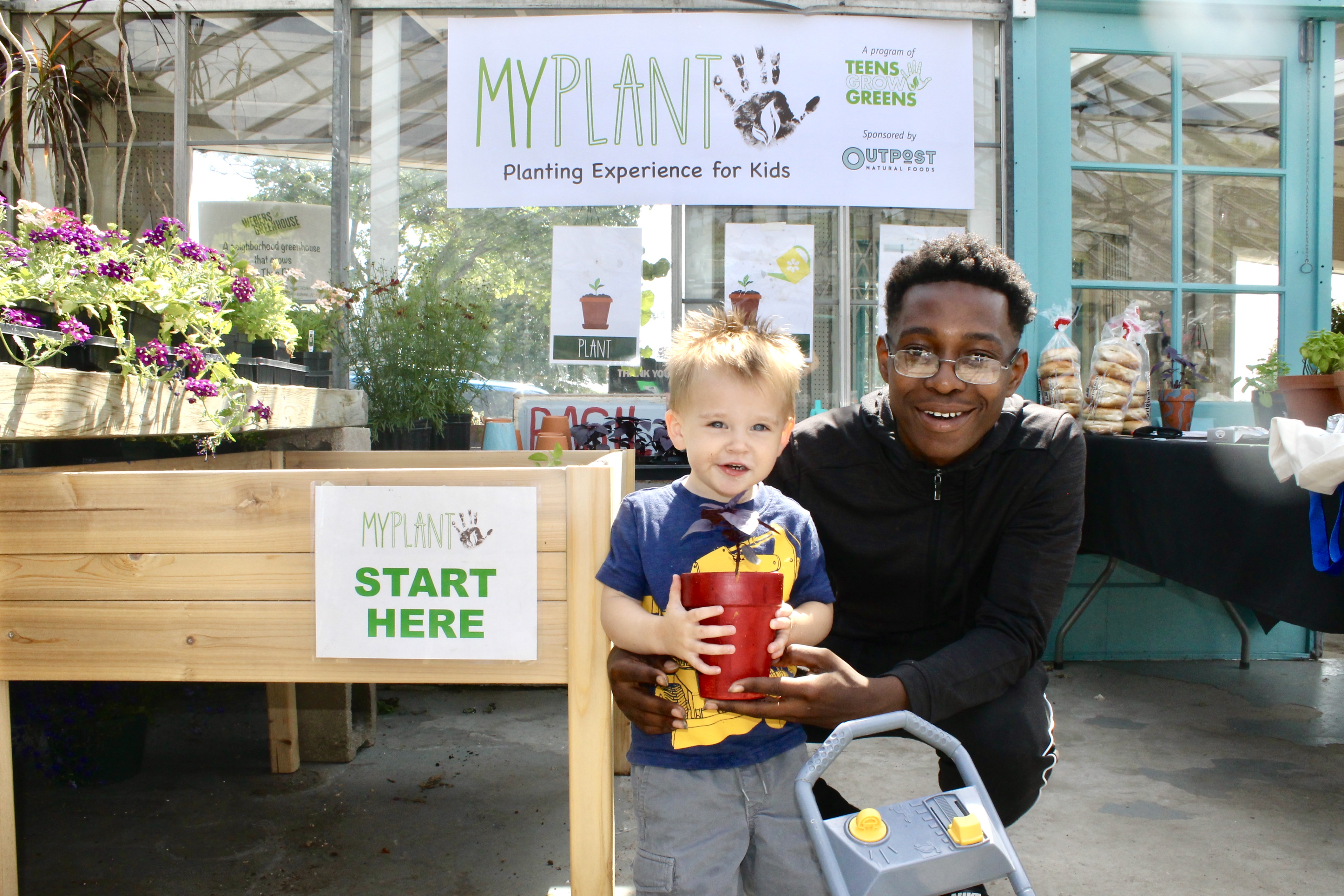 Otto Uihlein (from left), and Abdull Musa, Teens Grow Greens agricultural apprentice, show off Otto’s basil plant, which was potted as part of the MyPlant program. (Photo by Amanda Parrish)

In the corner of Webers Greenhouse, home of Teens Grow Greens, is a station labeled MyPlant with soil, plants, compost, watering cans and snacks.

As Otto Uihlein, 2, finished his bagel with cream cheese, strawberries and basil, he made his way to the MyPlant station and picked out a pot in preparation to grow his own basil plant.

With the help of a Teens Grow Greens apprentice, Otto got his hands dirty as he filled his pot with soil and compost. Next, the pair selected a small basil plant to rehome, patted down a final layer of soil and added water. With a smile and a little cream cheese on his face, Otto went to show his newly potted basil to his dad and Teens Grow Greens executive director Charlie Uihlein.

Teens Grow Greens is a nonprofit organization that grows plants, herbs, vegetables and the futures of Milwaukee teens. High school students learn leaderships skills, financial responsibility and the importance of growing their own healthy food during a nine-month paid internship.

A partnership with Outpost Natural Foods, the MyPlant program opened June 22 and hopes to reach younger kids to connect them with gardening and healthy food. 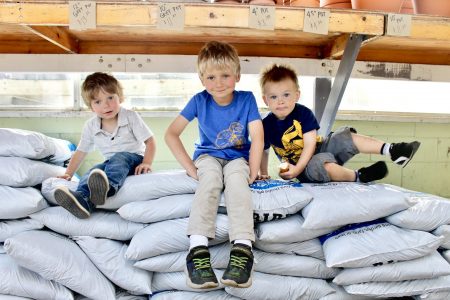 Teens Grow Greens is seeing a generational gap in those who garden and grow their own food, Claire Muza, growing director, said. Many of the customers that come through are grandparents, while interns often don’t have prior gardening experience. She said through the MyPlant program, Teens Grow Greens wants to rebuild the connection between kids and the ease of growing food.

It’s important for them “to make that connection of actual leaf to food because sometimes they wouldn’t even know that a plant is edible,” Muza said.

It’s essential to teach kids the importance of eating healthy when they are young because physical health has a big impact on mental health, she said.

The MyPlant program also includes a snack for the kids featuring the herb they just planted so they can taste the plant they are bringing home.

Parents can bring their kids to Webers Greenhouse, 4215 N. Green Bay Ave., from 9 a.m. to noon Saturdays to pot and take home their own herb plant. The free program runs until July 27.

The MyPlant program is not the only workshop at Webers Greenhouse. Most weeks, Teens Grow Greens holds other classes such as intro to gardening, paper making and terrarium making.

One of the young visitors at Webers Greenhouse William Jansen, 5, said he gardens all the time at home. He said his family just planted cucumbers, pumpkins and other vegetables.

William and his brother, Greyson, 2, both took part in terrarium making. The brothers first picked out vases. Next, they filled the bottom of the vase with rocks for drainage. Then they covered the rocks with dirt, followed by a succulent, moss and sticks.

William said this is his first terrarium and plans on putting it in his room.

Like the Jansen brothers, John Kroner, 6, is no stranger to gardening. When he isn’t playing soccer, Kroner said he plants things all the time with his friends and uncle.

Kroner had fun making his terrarium and wants to put it in his room, “I think on my desk,” he said. “It used to be my dad’s.”

As for the kids’ favorite part of the day, it was a unanimous “everything.”