You are here: Home / Home / Carousel / City-County Task Force on Climate and Economic Equity: What you need to know
Share this... 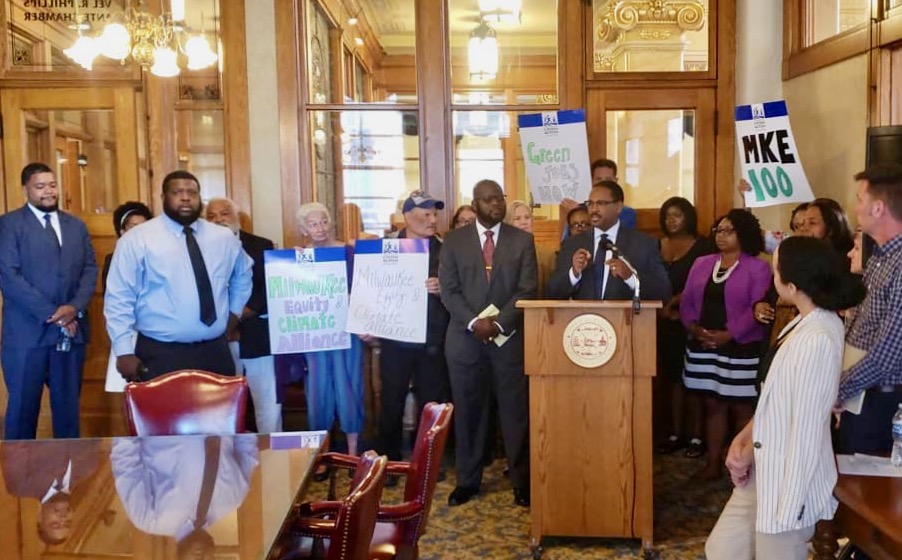 Council President Ashanti Hamilton, a sponsor of the City-County Task Force on Climate and Economic Equity, held a news conference July 9 to discuss the resolution. (Photo provided by Ashanti Hamilton)

The board adopted the resolution to create the task force, with 14 supervisors in support and two against. The resolution was adopted by the Milwaukee Common Council on July 9.

While substantial efforts have already been made to get the resolution passed, there is still work to do to get the task force running.

Here are some things you should know as it gets ready for action.

The task force was announced by Council President Ashanti Hamilton, sponsor of the resolution, on June 27. It aims to address the closely entwined issues of climate change and economic inequity in the city Milwaukee.

The resolution cites 2018 reports from the United Nations Intergovernmental Panel on Climate Change and United States Global Change Research Program, which state that the global climate has changed significantly since the Industrial Revolution, largely because of human activities.

Actions such as deforestation and increasing greenhouse gas emissions have caused global temperatures to rise, risking extreme weather, a decrease in biodiversity and degradation of public health, among other health and safety concerns.

In 2017, the City of Milwaukee expressed its support for the 2015 Paris Climate Accord, or Paris Agreement, which maintains the goal of limiting an increase in global temperatures to less than 2 degrees Celsius and aims to limit it to 1.5 degrees Celsius.

In the same year, President Donald Trump announced that the United States was withdrawing from the agreement, saying it would hurt the economy. In supporting the agreement, the city highlighted the importance of local leadership in fighting climate change. 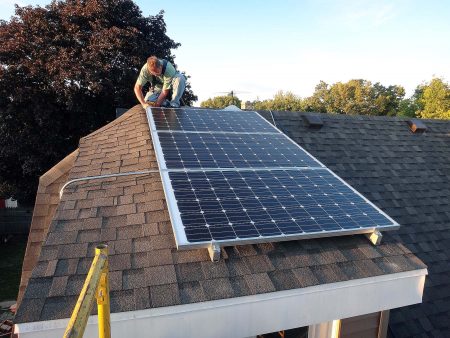 Installation of solar panels is just one of the “green” jobs expected to be created through the task force. (File photo)

Rafael Smith, civic engagement organizer of Citizen Action of Wisconsin, said before the task force, no plans had been made to address the Paris Climate Accord. He said that through the task force, efforts will be made real, while also addressing the city’s racial and economic inequality.

“We know we are in a climate crisis,” Supervisor Supreme Moore Omokunde said. “It is important to view it with urgency and to view the economic crisis with the same urgency.”

Additionally, the resolution addresses the 53206 ZIP code specifically, citing research done by the University of Wisconsin-Milwaukee in 2019, which states that the ZIP code has an overall poverty level of 42.2 percent.

On Thursday, several supervisors stood up to speak about the resolution, stressing the importance of even the smallest of actions against climate change.

One such supervisor was Moore Omokunde, who called for the task force earlier this month. He addressed the importance of everyone having access to economic opportunities and of the first steps coming from a government entity.

Not all supervisors were in support, however. Supervisor Deanna Alexander said she believed the task force to be a waste of time and a feel-good measure.

The task force will include 13 members which will include a Common Council member, a county supervisor, community members and representatives from organizations such as Citizen Action of Wisconsin and the NAACP.

The task force will address racial and economic inequity through the creation of “green” jobs. According to Dana Kelley, co-pastor of Risen Savior Community Baptist Church, such jobs might include fitting homes for solar power, installing solar panels, landscaping or waste management.

Kelley said the task force will put together training programs to certify community members for these jobs.

“Communities of color are responsible for a large percent of the carbon footprint, pollution and waste,” Kelley said. “Because of economic disparity, many don’t have the resources to retrofit their homes and be energy efficient.”

She said that the task force will focus “green” job training in these communities, specifically the 53206 ZIP code, in order to provide them with the means to push against climate change and make progress possible.

Moore Omokunde said it is important to focus on those who have been and will be hit hardest by climate change. He said low-income as well as black and brown populations are those most affected by climate change because they have less access to methods of lessening their impact such as composting or electric cars.

Kelley said plans for financing the projects are still being made.

“It sounds like a lot, but when you do the number-crunching, I think it’s just the tip of the iceberg,” she said.

Now that the City-County Task Force on Climate and Economic Equity has officially been adopted, definitive plans can be put together.

“We’re ready to run and prepare to start having meetings,” Kelley said.

Smith said that first, the 13 task force members must be appointed. The task force can then start to make recommendations and set the date for their first meeting.

The task force will have six months to put together a plan including a roadmap of governmental actions to reduce greenhouse gas emissions; suggestions for policy changes and investments to reduce racial and income inequity, including advice for maximizing the number of “green” jobs; how vulnerabilities to climate change will be assessed and mapped and creating a list of experts to aid the goals and plans of the task force. In developing this comprehensive plan, the task force will work to ensure success in the mitigation of climate change and economic inequity, and ultimately to improve the health of the community.