You are here: Home / Home / Carousel / What happened after folks left the ‘Table’? Catching up with On The Table MKE grant winners
Share this...

The concept is simple: Gather people from throughout the city who share a passion for a specific topic and get them talking over a meal.

And from there, search for solutions.

That’s the idea behind On the Table MKE, which took place last week in various locations across the city and was created by the Greater Milwaukee Foundation in 2017.

During the initiative’s first year, more than 160 topics were discussed, said Laura Glawe, the vice president of marketing and communication at the Greater Milwaukee Foundation. In 2018, On The Table MKE introduced Ideas to Action to fund projects generated from the discussions.

The Milwaukee Neighborhood News Service decided to catch up with some of the 16 projects to find out what’s happened since the table discussions. 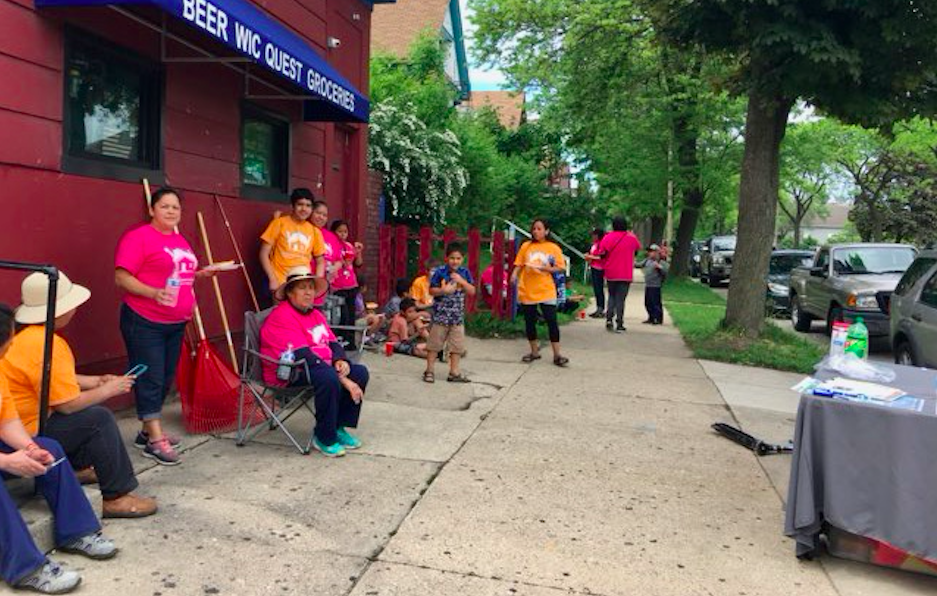 Clarke Square Parents and Friends was a direct result of talks that stemmed from the Greater Milwaukee Foundation’s On The Table MKE. (Photo provided by Clarke Square Neighborhood Initiative)

Name of project: Clarke Square Parents and Friends (formerly Mothers on a Mission)

The idea was to get parents talking to each other about the community, their goals and what could be done to improve the situation, said Ian Bautista, the executive director of the Clarke Square Neighborhood Initiative. One of the main topics that came up during the conversation was how to support one another.

Bautista said the ideas and solutions talked about were implemented immediately.

“They are not the type of individuals who wait,” he said.

One of the group’s ideas was to walk students home from school. It seems like a simple concept, but it’s a very neighborly thing to do, Bautista said. This group of parents walks with neighborhood kids to and from school and ensure they get home safely. They also try to keep the neighborhood clean.

Since the group’s inception, more parents have shown interest in getting involved. School officials and leaders are also in conversation with Clarke Square Parents and Friends.

The funding of $550 provided a means to buy cleaning supplies. Clarke Square Parents and Friends also hired a local artist to create a logo, which leaders put on a T-shirt. 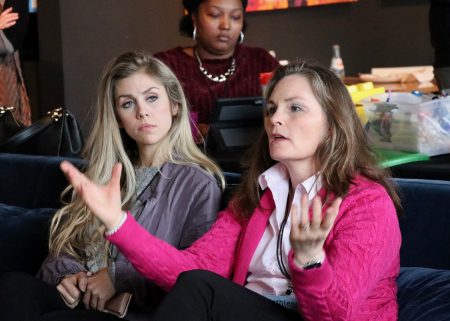 Plan: Received $1,000 to create a series of conversations on employment and independence for individuals with autism

Islands of Brilliance is a neurodiverse talent incubator, which works with children as young as 8 and older who fall on the autism spectrum, said Mark Fairbanks, its executive director. The idea is to help children living with autism acquire skills, which can increase their chance of independence.

Last year, during its On The Table discussion, Islands of Brilliance focused on how to transition young adults with autism into the world of employment. People who work in HR were invited to expand their understanding of what it means to hire a person who is neurodiverse or disabled.

Fairbanks said the initial conversation didn’t spark any major changes, but it opened the door to more discussions. Relationships between individuals and organizations were formed because of the conversation.

Fairbanks said employing people living with autism is a topic of conversation at a lot of organizations and companies. Now, there’s more active dialogue between organizations such as Islands of Brilliance about hiring diverse talent.

In 2018, the Menomonee Valley Partners, a nonprofit organization, which began 20 years ago as a way to revitalize the Menomonee River Valley, held its second On the Table conversation. Corey Zetts, the executive director, said the main topic was the workforce, with one table focusing on workforce transportation and the other on bridging cultural gaps on age and race in the workforce.

One table discussed how the lack of transportation  makes it difficult to get a job in the valley.

“That last mile from the last bus stop to the [company’s] front door is really challenging,” Zetts said.

The other table examined workforce challenges and how to make the work environment a more inclusive place.

“There hasn’t been a noticeable change, but the conversations are happening on all levels,” Zetts said.

Zetts said the initial conversation has elevated the topic of workforce transportation, and more people are realizing that it is a common issue throughout the community.

Zetts said the conversation has carried over into the Valley Circles, a project of the Menomonee Valley Partners in which employees from different areas such as HR or sales gather to talk and swap ideas.

Plan: Best Babies Zone, or BBZ, focuses on reducing disparities in infant mortality and birth outcomes in Milwaukee’s Westlawn neighborhood. The $1,500 award supported a partnership with Ex Fabula that allowed residents to share birth stories in a series of events, including an introductory storytelling workshop, story circles and a “StorySlam” community event.

What did you talk about during On The Table 2018?

Marcia Blackman, health project manager at United Way of Greater Milwaukee & Waukesha County, said the 2018 discussion served as a planning session on how to use storytelling to mobilize residents and organizations on the topic of infant and mother health.

“We kicked off the discussion with listening pairs – each partner telling a birth story from their own experience,” Blackman said. “Our large group discussion centered on what elements we should incorporate into a storytelling process with residents.”

The Ideas to Action grant then brought that storytelling process to life. Through partnering with Ex Fabula, Blackman said the team developed workshops, coaching and finally, the StorySlam.

Delicia Morris, a case manager for the Housing Authority of the City of Milwaukee, identified changes through the residents’ willingness to tell their stories at the StorySlam and eagerness to get involved in neighborhood planning. “We have really gained momentum with the on-boarding of health and wellness ambassadors,” she said.

“The community is coming to the awareness that their story was not a one-off situation and that there is an issue that needs to be addressed. The conversation of birth is not one that is normally shared, and I feel the community is still reflecting on it all.”

Conversations surrounding the social and economic determinants of health have continued since the 2018 On The Table and StorySlam through both awareness and action.

Name of project: The Arts as a Means of Self-Expression

Plan: The group’s $2,000 award funded a performing arts event and meal discussion for residents of the association’s community and its surrounding neighborhood to participate in and enjoy. The organization was formed from a combination of block clubs run by residents in North Side neighborhoods.

What did you talk about during On The Table 2018?

“Instead of so many organizations acting separately, why not work together on these common issues in the neighborhood?”

This question echoed as a prominent theme of last year’s On The Table discussion, according to Samuel Sims, the neighborhood association’s president.

Churchill Caruthers, a board member, said the conversation’s format allowed for collaboration between the like-minded groups present. “It’s hard for organizations to figure out how they can connect. On The Table facilitates that so well,” Caruthers said.

“That’s the beauty of On The Table, you get to see what fits and what doesn’t,” Caruthers said. “Someone will be doing great things you didn’t think of as an organization, and it’s like an ‘aha’ moment for your group.”

Caruthers said that exposure attracted more neighborhood participants, especially business owners in the neighborhood, to connect with the association and its programs. The board members also said they have seen an influx of sustainable college student volunteers within their neighborhood.