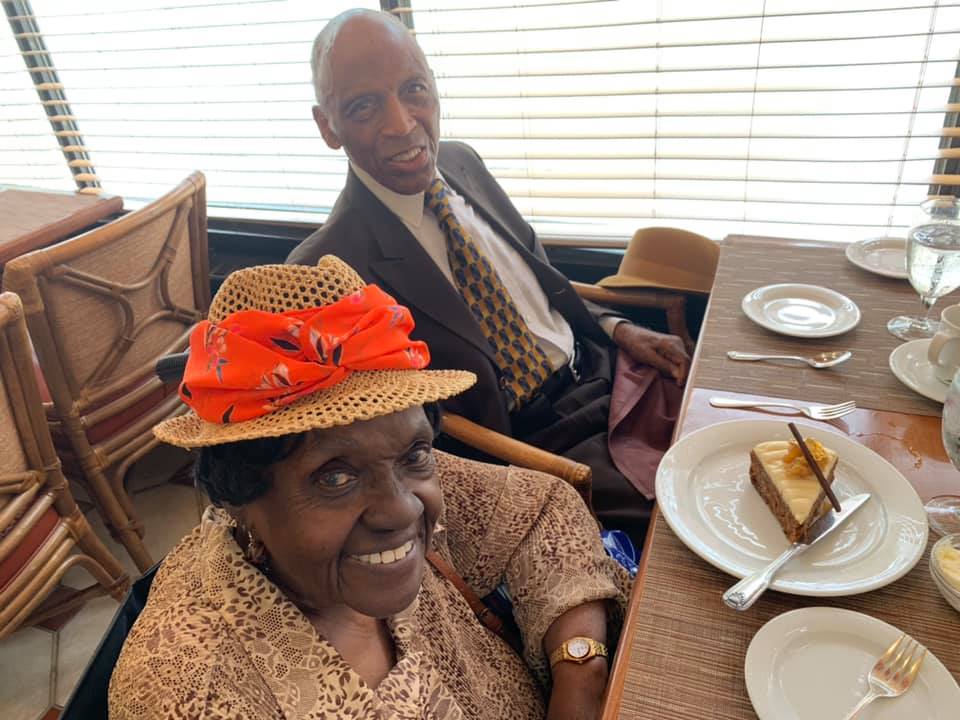 Mildred Harpole, shown with her husband, Reuben, worked tirelessly on behalf of the community. (Photo provided by the Harpole family)

“She was a super lady who certainly had a way with words,” recalled Harpole Jr., who remembered the first time they met. At the time, he was a student at MATC, and she was attending Marquette University.

“I was so impressed by her. She was overwhelming, and I didn’t know if I had the vocabulary to keep up with her,” he said.

He later enlisted in the service, and while stationed in Texas, she called him.

And he made his move.

“I proposed to her,” Harpole Jr. said.

Born in Cleveland, Harpole graduated from Marquette University before receiving a law degree from Western Reserve Law School and a master’s degree from Cardinal Stritch, according to her husband.

She worked as a reading specialist at Milwaukee Public Schools and also as an administrator at Harambee Community School. At MPS, she often protested against segregation and a lack of resources at primarily African American schools. In an archived interview that’s part of the UWM Libraries’ March on Milwaukee Civil Rights History Project, Harpole spoke on the issue.

“Some, many of the schools had poor books or textbooks. They had overcrowding. Old buildings. That environment was poor. They didn’t have what I considered quality materials,” Harpole said.

Harpole, who once ran for a seat on the school board, said she initially worked to overcome those challenges by creating material based on newspaper stories or television reports.

“We had very little material … so we could be creative and innovative in our approach, and so I loved that,” she said in the interview.

She also helped to form two “Freedom Schools,” which offered educational opportunities to children of African American migrants who moved to Milwaukee, according to a news release from the Milwaukee Times.

After leaving MPS, Harpole served as director of Fair Housing and Equal Opportunity for the Milwaukee office of the U.S. Department of Housing and Urban Development, or HUD.

There she advocated on issues involving fair housing and homelessness before retiring in 2002.

She and her husband, also a longtime community activist and educator, had founding roles in numerous Milwaukee nonprofits and other organizations, including the Central City Teacher  Community Project, Milwaukee 100 Black Men, MPS Homework First Program and the Children’s Performing Arts group, which became the Ko-Thi Dance Company, according to a 2015 article on the UWM website. They also worked together on a television show called “Black Thang,” where they helped students learn about writing and cinematography.

Together, the couple, who married in 1959, received many prestigious awards and honors, including the Vatican II Award from the Milwaukee Archdiocese in 1993; the Frank P. Zeidler Public Service Award in 2013; the first Distinguished Educator of the Year Award at the University of Wisconsin-Milwaukee in 2015; and the Whitney M. Young Jr. Legacy Award from the Milwaukee Urban League in 2018.

Harpole served as chairwoman of the Health Committee for the Harambee Health Center and was active on many boards, including the City of Milwaukee Arts Board, Community Brainstorming Conference, TEMPO, Family Service of Milwaukee, the Milwaukee County Cultural Artistic and Musical Programming Advisory Council, among others. She also served as national president of Eta Phi Beta sorority from 1990 to 1994.

On Wednesday, Ald. Cavalier Johnson issued a statement to NNS about Harpole.

“Mildred was tireless in her desire to educate the public on the issues of the day – no matter if they were hot-button or more subdued. Mildred approached every challenge with a calm grace that could ground the situation and affirm to everyone that everything would be all right,” he wrote in the email. “Mildred was deeply loved by her community, by her husband, Reuben, who my heart breaks for. Mildred Harpole will be sorely missed.”

“She  was a queen of this community,” he said. “She fought for fair wages, access to quality education, served as a mentor and was a great example of how to stay involved and engaged in community activism at every stage of your life. I think her legacy  is going  to be that you always put your best foot forward, and you never have to accept what other people think of you.”

In addition to her husband, Harpole is survived by her son, John and daughter, Annette.