Dasha Kelly Hamilton has a way with words, and the City of Milwaukee is honoring her for that gift.

“She’s a poet, an artist, a woman and a change agent,” said Rachel Arndt, who spoke Sunday during the poet laureate’s inaugural in the library’s Richard E. and Lucile Krug Rare Books Room. Arndt is the public service area manager for the Milwaukee Public Library.

Kelly Hamilton has a history of using her writing as a springboard to help others express themselves. She created a nonprofit, Still Waters Collective, nearly 20 years ago. The organization delivers programs to young people that focus on their writing and performing their work. 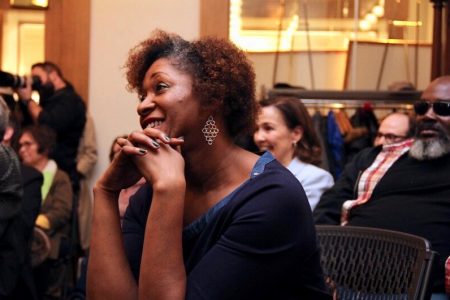 She said she invites people into conversations through poetry. Her focus is to help people find their voices and speak so they will be heard.

“There are people who don’t know that their voice is valuable, for a lot of reasons. They weren’t raised to believe that, they are in a city that may not value it or… they haven’t applied their voice in a way that fortifies that for themselves,” Kelly Hamilton said.

Milwaukee Public Library Director Paula Kiely said the new poet laureate will work with the library system to create programs in its branches that are designed to engage library users in conversations about the community.

Kelly Hamilton has taught workshops at home and abroad. She helped a class in Lebanon that wanted to introduce spoken-word poetry there. She’s also served as an arts envoy for the U.S. Embassy in Botswana and the island of Mauritius, where her work was aimed at community building.

She’s also taught at the Racine Correctional Institution. There, she met Daniel Scheidell, an inmate who was later exonerated, at a workshop created to help convicts use writing to express themselves.

Scheidell was one of the speakers at the inauguration, telling listeners that Kelly Hamilton participated in workshops, readings and a holiday program at the prison. “She brought anywhere from eight to 10 individuals, writers, comedians, you name it, they were there. And many of them returned many times.”

Kelly Hamilton told the audience that writing a poem is similar to working on a puzzle with words.

“I love stories and I love language and I love the effort of puzzling them together,” Kelly Hamilton said. “It’s taking them apart and putting them back together. It’s always better, it’s always clearer, it’s always shinier, and I always mean it more.”