You are here: Home / Home / Carousel / Program gives small businesses and entrepreneurs a helping hand (and money)
Share this... 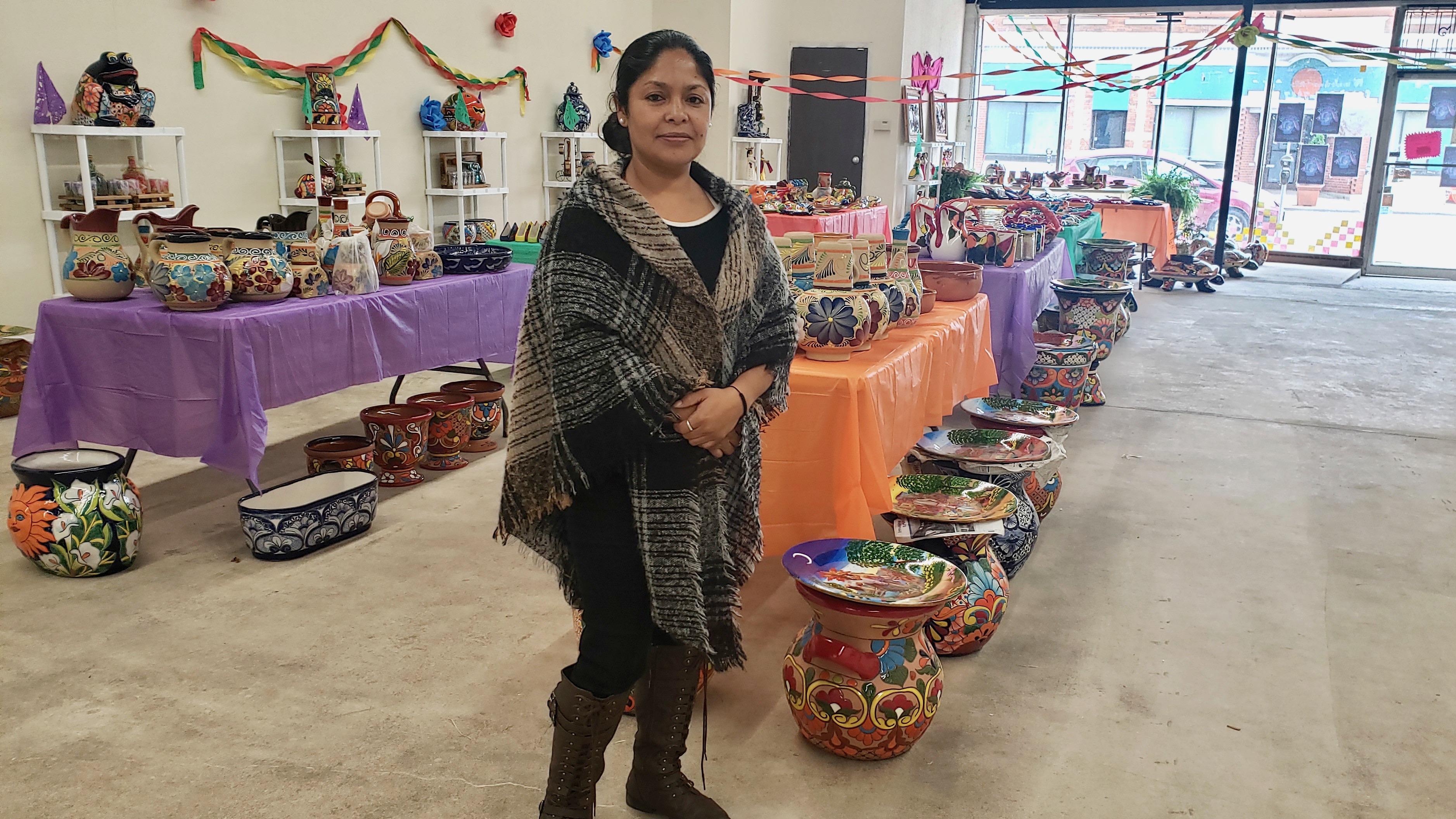 Alejandra Gonzalez sells Mexican ceramics out of a building that was rehabilitated with a Brew City Match grant. “It’s a big open space for me to fill, and it’s on a street with restaurants and churches and lots of activity,” Gonzalez says. (Photo by Edgar Mendez)

Making big things happen for small businesses is one of the goals of Brew City Match, which is helping to change the economic landscape in several Milwaukee neighborhoods.

Launched in 2018, 59 projects have received support from Brew City Match. Many of them are based in the target neighborhoods of Historic King Drive, Cesar E. Chavez Drive and the North Avenue/Fond Du Lac business corridor, said Beth Haskovec, commercial revitalization program officer for the regional chapter of Local Initiative Support Corporation’s Milwaukee office, which is leading the initiative.

One of the projects that received funding support was Phase II of the Walnut Way Conservation Corp’s Innovations and Wellness Commons, a 1.5 story commercial building on North Avenue that will house independent clinicians, therapists, counselors and also feature retail space.

That project received a $25,000 award that helped pay for architectural and design renderings and some of the construction on the new Commons, which is expected to be completed in July 2020, said Antonio Butts, executive director of Walnut Way Conservation Corp.

The second phase of the Innovations and Wellness Commons is projected to be completed by July 2020. The building on North Avenue will North Avenue will house independent clinicians, therapists, counselors and also feature retail space. (Rendering provided by Walnut Way Conservation Corp.)

Brew City Match was created through a $3.5 million three-year investment from JPMorgan Chase & Co., one of the world’s oldest and largest banks. Though led by LISC,  the initiative is also supported by other partners, including the City of Milwaukee, Hmong Wisconsin Chamber of Commerce, Columbia Savings & Loan, Wisconsin Women’s Business Initiative Corporation  and MKE United, which are leveraging resources to provide financial and other support to multiple projects.

The businesses included day spas, catering, boutiques, restaurants and others. Ninety-two percent of Match winners are entrepreneurs of color and four of five winners are businesses owned by women, Haskovec said.

The Match also supported the restoration of a 4,500-square-foot building on the corner of South Cesar E. Chavez Drive and West Washington Street. The building had long been occupied by Fashion City, a clothing store whose owners moved their business online. That created an opportunity to rehab a building long in need of an upgrade, said Nelson Lang, property manager for El Rey Services, which owns the building.

Nelson said the project received $15,000 in support from Brew City Match, along with a match through a City of Milwaukee grant.

For the next several months, the space is being occupied by winners of Pop-Up MKE, another local initiative aimed at increasing minority entrepreneurship in the city.

Alejandra Gonzalez, who used to paint ceramics in her hometown of Guanajuato, Mexico,  is selling ceramic glasses, fruit baskets, jars and plant holders there. She said she loves the building and location.

“It’s a big open space for me to fill, and it’s on a street with restaurants and churches and lots of activity,” Gonzalez said. Gonzalez shares the retail space with members of the LUNA Collective, a group of Latinx artists in Milwaukee.

LUNA, which has 20 active members, held a grand opening at the location in late October and will use the space to host workshops, photo shoots, and as a gallery and exhibit space, among other uses, said Rozalia Singh-Hernandez, a muralist and illustrator.

“It’s a great spot that’s in the middle of an active space,” she said.

Building owners or other prospective entrepreneurs have not missed their chance to receive support from Brew City Match. The next round of winners will be announced in 2020, Haskovec said.

“It’s very important to Milwaukee,” Butts said. “These are vital commercial corridors in Milwaukee that are getting some attention and support, which is going to help bring more resources to residents and people who want to launch their own business.”